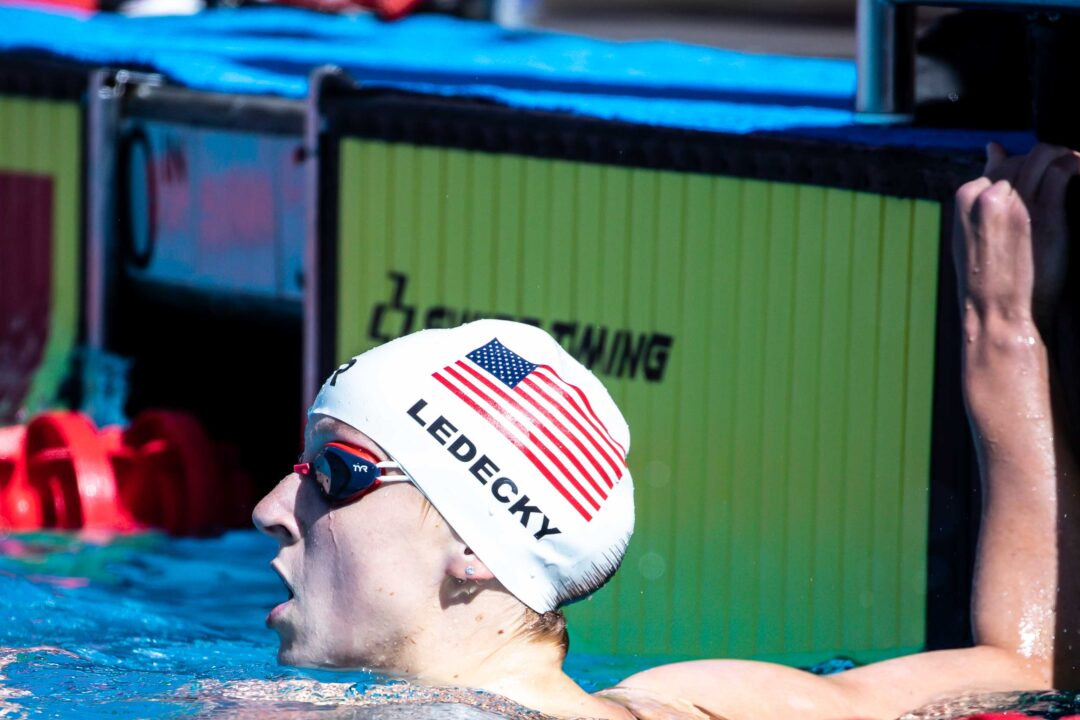 This year marks the first edition of the Olympic Games that will feature the women's 1500 free. Stock photo via Jack Spitser/Spitser Photography

This year marks the first edition of the Olympic Games that will feature the women’s 1500 free, therefore, this will also be the first time the event is swum at the U.S. Olympic Trials. Of course, when discussing women’s freestyle events, once you go over 100m, Katie Ledecky is there to be reckoned with. And the greater the distance, the greater the margin between Ledecky and everyone else. That being said, Ledecky, who is the World Record holder and has been 18 seconds faster than anyone else in the history of the sport in the 1500 free, is certainly the favorite heading into U.S. Trials.

Ledecky has been simply untouchable in this event. She holds the 10 fastest times in history in the event, and 15 of the 25 fastest. Additionally, the currently active swimmer anywhere in the world who has the next-fastest lifetime best behind Ledecky is Italy’s Simona Quadarella, whose lifetime best is still 20 seconds off Ledecky’s. Speaking strictly on American swimmers, Ashley Twichell is the next-fastest in terms of lifetime bests, and her best is 34 seconds off Ledecky’s.

Ledecky currently ranks 1st in the world this year, despite her best from this year being a full 20 seconds off her lifetime best from 2018:

All that being said, there’s a profoundly interesting battle brewing for 2nd place in the 1500, consisting of a number of swimmers who could plausibly grab the #2 slot and punch their ticket to Tokyo.

Even within the past few weeks, several swimmers have leaped up to add their names to the list of swimmers vying for the Olympic roster spot. Most recently, Ally McHugh made a huge impression at the final Pro Swim Series stop of the year, breaking 16:00 for the first time her career. Just one month out from racing at Trials, McHugh clocked a 15:59.54, making her the 2nd-fastest American in the event this season behind Ledecky, and the only other swimmer other than Ledecky to have broken 16:00 this year.

Swimming in the same heat, Arizona State’s Emma Nordin posted her 2nd massive lifetime best in 2021 alone. Nordin began the year with a personal mark of 16:36.69, before dropping to 16:11.23 at the April Pro Swim Series. Then, Nordin went on to clock a 16:01.37 in mid-May, marking 35 seconds of total improvement just this year in the event.

Another swimmer who cracked a lifetime best in May was recent Michigan grad Sierra Schmidt, who swam a 16:06.85, also at the Pro Swim Series. With the swim, Schmidt will enter the Trials with the 6th-fastest time by an American this year, and the 6th-fastest American during the U.S. Olympic Trials qualifying period.

Leah Smith, who has consistently taken the #2 spot behind Ledecky in the 400 and 800 freestyles for years now, will enter the meet seeded outside the top 8. Smith, who’s a medal threat in the 400/800 at the Olympics (provided she makes the team in those events), hasn’t had the same level of success in the 1500. She has a personal best of 16:00.82, which is the 5th-fastest best time in the field, but she hasn’t been under 16:10 again since she swam her personal best in August of 2018.

Ashley Twichell enters the meet as the 2nd seed, with her lifetime best of 15:54.19, which she swam at the 2019 World Championships. Twichell is already on the U.S. Olympic roster for open water, and will be looking to add her name to the roster in the pool as well. She is both the 2nd-seed and has the 2nd-fastest lifetime best in the field, just ahead of Erica Sullivan (15:55.25). Twichell is coming off a 5k national title earlier this year.

Erica Sullivan is also coming off an open water national title, having won the women’s 10k at the National Championships in April. She went on to take 3rd in the 5k two days later. Sullivan has a lifetime best of 15:55.25 from 2019, which makes her the #3 seed going into the meet. She’s been the 4th-fastest American in the event this year so far. She’s also the 2nd-fastest SCY 1650 freestyler all-time with her personal best of 15:23.81, which is also from 2019.

Wave I Standout: Lucy Malys (PB – 16:47.56) Malys, who competes for the Oakland Live Y’ers in Michigan, dipped under 17:00 this year for the first time, sliding in well under the Wave I standard. Wave I will look a little different in the women’s 1500 than in other events, as it appears there will only be roughly a dozen Wave I swimmers. That being said, Malys is certainly one to keep an eye on. The 2020-2021 season was incredibly fruitful for Malys’ SCY swimming. She dropped 20 seconds in the SCY 1650 free this season, roaring to a 16:09.22 at the NCSA Championships this March. She carried the SCY success into the LCM pool, going on to swim at a Sectional meet in late March as well. At that meet, Malys picked up Trials cuts in the 400 free, 1500 free, and 200 fly.

I would be very surprised if Leah Smith swims this. The 200 is too important of an event for her with not a lot of room for error.

Too many open water swimmers to compete against:

That Jr WR is pretty quick. Good thing she did it when FINA feels she should have to qualify.

McHugh is a strong finisher, which is a good trait to have in the 1500.

A sprint finish at the end of a 1500 could be in the cards. I could see Erica Sullivan and McHugh having a furious battle for 2nd.

Whoever is the second at Trials won’t even make the final in Tokyo. I hope that it would be at least the competition drama behind Ledecky, so it wouldn’t be boring to watch.

Russia failed to final in the women’s 1500 meter freestyle at the 2019 FINA World Aquatics Championships.

Russia failed to final in the women’s 1500 meter freestyle at the 2017 FINA World Aquatics Championships.

Russia failed to final in the women’s 1500 meter freestyle at the 2015 FINA World Aquatics Championships.

Russia failed to final in the women’s 1500 meter freestyle at the 2013 FINA World Aquatics Championships.

Russia failed to final in the women’s 1500 meter freestyle at the 2011 FINA World Aquatics Championships.

Kirpichnikova is training with the distance/open water whisperer Phillippe Lucas. I’m pretty confident that she’s going to break that streak.

Ashley Twichell was 4th at the World Championships. Why are you so confident that the second American can’t finish in the top 8?

I predict Erica Sullivan has more upside than Ashley Twichell (15:54.19).

But if Twichell was 4th (5th if we put Ledecky back in the mix), and Sullivan has more upside, that strengthens the point, doesn’t it?

I remember when Kate Ziegler won the world championship in the 800 in 2007 then the following year in Beijing both her and hoff failed to final. In Beijing when it was morning finals the American women only won 2 events (coughlin in the 100 back and Rebecca soni in the 200 breast)

Let’s not dwell on the short lived supersuit era.

I remember Katie being so distressed officials were waiting to clear the pool for the next event. One had to go tell her to get out.

It’s simple. McHugh is 7th currently, but Swimswam hasn’t picked her for Tokyo. But my prediction is no better or worse than anybody else’s. If it hurts your patriotic feelings with such guessing, then please, excuse me. You can even remove this my post. It is just emotional.

I responded to your claim with facts and you aggressively bring up emotions and patriotic feelings. You see how that went down?

A couple cans short of a six pack.

Apart from Ledecky we have two Italians, two Chinese, one Russian and one German who a better than the second American.

Doesn’t that put the second American in the final then?

The USA has yet to conduct Olympic Team Trials unlike CHN, GER, ITA, RUS.

You never know with the 1500m, it is one event where swimmers suddenly drop huge chunks of time in the big competitions, especially the young swimmers.

It’s true. No questions. If we know everything beforehand then there would be no needs in actual race. But at this point we have some sense of probability of event to happen. You don’t expect the second American to be faster Ledecky, do you? Or Quadarella, or Wang end so forth. And if you look at current ranking you won’t anticipate the second American to be much higher than she is now. If at all.

Which teenager are you touting, Mariah Denigan or Bella Sims?

In other news Leah Neal Just announced her retirement today 😢😢😢

*Lia, not to be confused with Leah Neale who swims for Australia.