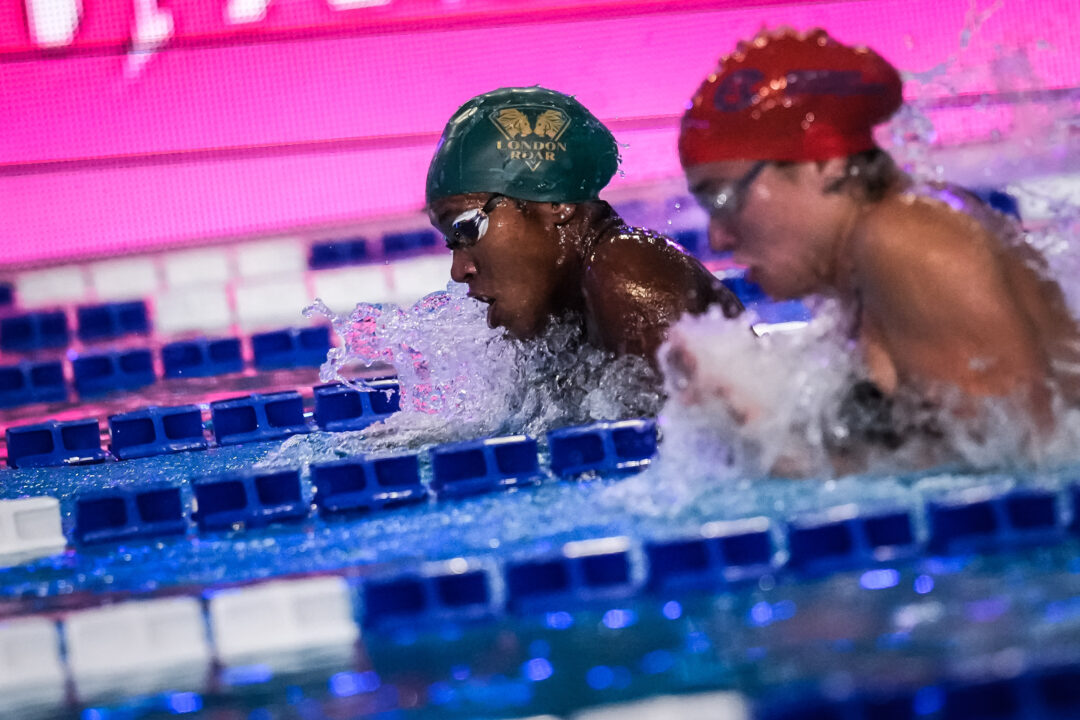 Alia Atkinson has had a stronghold on the SCM breaststrokes for nearly a decade. Will she be able to clinch another two World Champs titles this week? Archive photo via Mike Lewis/Ola Vista Photography

Alia Atkinson has been one of the quickest breaststrokers in the world for the last several years and is the current world record holder in the women’s 50 breast. At this meet 3 years ago, Atkinson topped the podium in 50 breast with a 29.05, defeating fellow breaststroke great Ruta Meilutyte who took silver in a 29.38. That swim by Atkinson was actually slower than the world record she set earlier in 2018 of 28.56; a world record that still stands today.

Atkinson has been under 29 seconds 11 times in her career but only one of those swims came post-2018 when she swam a 28.88 in December 2020. Atkinson currently sits at #2 in the worldwide rankings for 2021 and closed out her ISL season with a 29.15 in the final, setting herself up nicely to vie for a repeat world title in Abu Dhabi.

The top entrant according to the psych sheets is Benedetta Pilato who is entered with the 28.81 she swam in November 2020. Pilato had an electric ISL season back in 2020 and while she kept up the momentum through the first few months of 2021 (including a long course 50 breast world record in May), she hasn’t been as on-fire in the latter half of 2021.

Pilato’s fastest time this season is still a solid swim, however, and keeps her in the running. She swam a 29.51 just a few weeks ago, which marked her 14th fastest swim ever.

It’s actually Pilato’s Italian counterpart Arianna Castiglioni who holds the top time of 2021 thus far, having hit a 29.09 at ISL match 10. That September 2021 swim is Castiglioni’s PB in the event and could serve as a precursor to an upcoming sub-29 breakthrough at these Championships.

While it might be a race between Pilato, Castiglioni, and Atkinson, another few women are on the verge of getting into the 29-low zone and could end up challenging for a spot on the podium, should any of the top 3 falter.

Lastly, but certainly not least is American Olympic gold medalist in the 100 breaststroke Lydia Jacoby. Jacoby wasn’t an obvious threat in this event at the World Cup earlier in the fall where she just dipped under 30 seconds in a 29.97 but we’ll have to wait and see where she stands when she gets into it in Abu Dhabi.

Alia Atkinson is not only the world record holder in the 50 breaststroke, but she is also the co-world record holder in the women’s 100 breaststroke. After Ruta Meilutyte set the mark at a 1:02.36 in 2013, Atkinson tied that mark in 2013 and then hit it again in 2016. That means she has 2 produced two of the fastest swims in history but hasn’t gotten back down to that range in roughly 5 years.

The only woman who has been under 1:04 in 2021 other than King, who isn’t racing in Abu Dhabi, and Atkinson is Arianna Castiglioni. Castiglioni swam a 1:03.90 in September. That’s Castiglioni’s quickest time in history and she paired it this fall with 4 swims between 1:04.04 and 1:04.40.

Castiglioni will be joined in the 100 breast not by Pilato but by her other Italian teammate Martina Carraro. Carraro holds a PB and season-best of 1:04.01 from when she won Short Course Euros gold in the event a few weeks ago.

Carraro was joined on that Short Course Euros podium by a duo of juniors in the form of Evgeniia Chikunova and Eneli Jefimova. Chikunova and Jefimova shared silver at the meet, each hitting a 1:04.25. That was a best time for both of them and indicates that they will be in the running for the podium as they race towards their first-ever sub-1:03 swim.

50 breaststroke standouts Hulkko and Gorbenko will race the 100 as well but are a little further out with their entry times of 1:04.41 and 1:04.44, respectively. Mona McSharry of Ireland is coming in just ahead with an entry time of 1:04.36.

Lydia Jacoby may seem like a favorite to win considering her Olympic success but with very limited short course meters data to run on, it’s not clear whether she will have an automatic path to the podium. Jacoby swam 4 short course meters 100 breaststrokes this fall ranging between 1:05.20 and 1:06.83. Jacoby’s teammate Emily Escobedo is going to be one to watch considering her lifetime best of 1:04.31 from just last year. She hasn’t been as successful this year in the event, having swum a season-best of 1:05.11 a few weeks ago.

The other women to keep in mind will be a pack of 1:04-mids to the tune of Sophie Hansson, Nika Godun, Molly Renshaw, and Kotryna Teterevkova.

Evgeniia Chikunova pulled off a silver medal swim in the 100 at the 2021 Short Course European Championships, but her 200 breaststroke was where she really shined. Chikunova threw down a 2:16.88 world junior record in the 200 breast final to take gold by nearly two seconds ahead of teammate Maria Temnikova (2:18.45).

That swim made her the second-fastest performer in the world in 2021 behind Lilly King who had swum a 2:16.83 at the time and has since added a 2:16.47 to her 2021 resume. But in King’s absence, Chikunova is the fastest 200 breaststroker in the field here and she is not only the only entrant who has been under 2:17, she’s the only one who’s even cracked 2:18.

Emily Escobedo got as close as she could to the 2:17 barrier when she posted a 2:18.00 at the ISL final but couldn’t quite catch up to Chikunova. Chikunova left Tokyo this summer with a pair of 4th place finishes in the 100 and 200 breaststrokes but in a Schoenmaker/King/Lazor-less field, she’s the favorite to win.

Escobedo cannot be counted out though considering the fact that she actually has a quicker lifetime best in the event than Chikunova. Escobedo swam a 2:16.51 back in November 2020. If she can channel that speed in Abu Dhabi, we’ll certainly be in for a good race for the crown.

Molly Renshaw of Great Britain has been under 2:18 before, having delivered a 2:17.80 last year, but she has a season-best of 2:19.34. That means she has the potential for a top 3 finish but will need to be at her best or better in order to challenge for the gold here.

Chikunova’s fellow medalists from Euros last month Maria Temnikova of Russia and Italy’s Francesca Fangio are the 4th and 6th seed, while Anastasia Gorbenko sits in 5th with her 2:19.22 from ISL Match 5.

In addition to Olympic medalists Schoenmaker, King, and Lazor being absent from the meet, a few other season-leaders in the 200 breast will be missing from this race. Among them are Japan’s Kanako Watanabe (2:18.70), Abbie Wood of Great Britain (2:19.11), Vitalina Simonova (2:19.22), and Olympic 5th place finisher Kaylene Corbett (2:22.06 LCM).

The only other woman racing here who is entered with a time quicker than 2:20 is Czech swimmer Kristyna Horska who posted a 2:19.89 for 5th overall at Short Course Euros.

Would love molly renshaw to medal