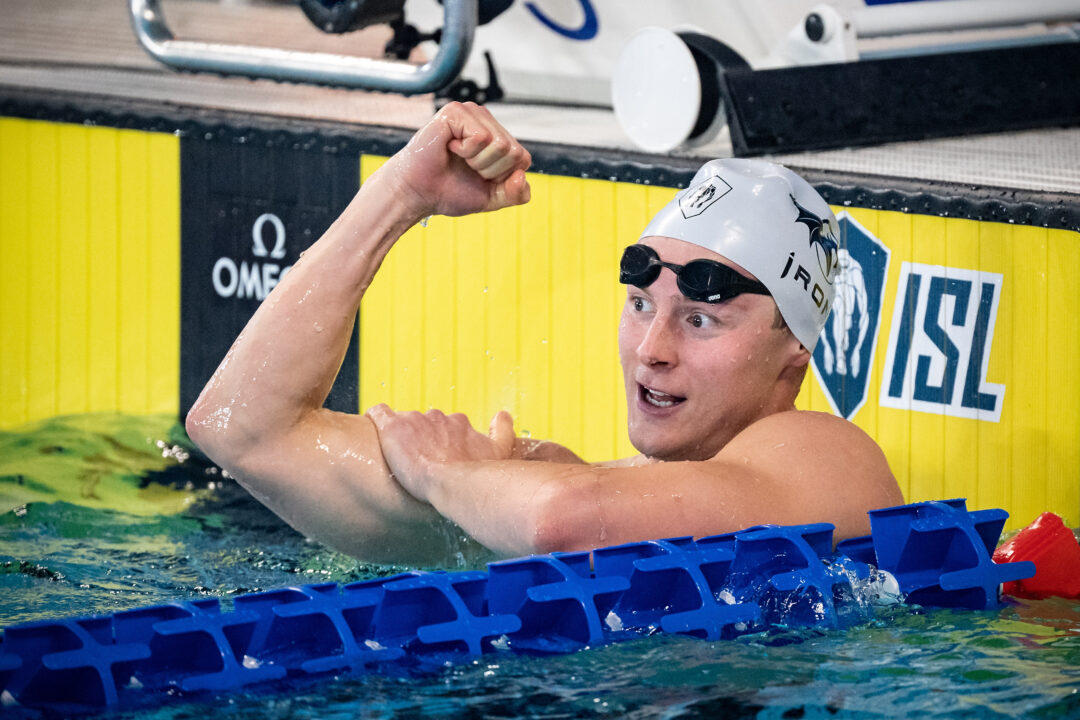 NY, Iron, Tokyo, and Aqua will be vying for their first ISL match win ever and a spot into the play-offs, creating high stakes for each event battle. Current photo via Giorgio Scala / Deepbluemedia / Insidefoto

The last ISL match of the regular season is set to feature the NY Breakers, Iron, Tokyo Frog Kings, and the Aqua Centurions, where each team will be vying for not only their first ISL match win in franchise history but also a spot into the play-offs. A reminder that the remaining three teams from this match will go onto swim at next week’s “play-in” match, where the top two teams will advance to the play-offs. There is a lot at stake here and each team has relatively stuck with their best swimmers in each event, setting up a number of exciting battles.

Headlining the women’s 200 back will be NY’s Daryna Zevina and Tokyo’s Gabby DeLoof, who both swam within one one-hundredth of each other during their respective previous matches. In the women’s 50 back, Alicja Tchorz won match 7 for the Breakers at 26.38, which is 0.12s faster than what Aqua’s Holly Barratt (26.50) swam in match 6.

Iron’s Thom de Boer and Tokyo’s Vlad Morozov both placed second during their last match in the 50 free, and are set to go head-to-head today in the event. Later on in the meet, event winners Paige Madden of Tokyo and Barbora Seemanova of Iron will swim side-by-side in the 400 free.

NY’s Abbie Wood and Molly Renshaw will be the duo to watch in the women’s 200 breast following their 2-3 finish in match 6. Aqua will of course have star breaststrokers Martina Carraro and Arianna Castiglioni in the event as well, but are more likely to perform better in the 50 breast. But all eyes will be on Wood to perform her best in the 200 IM against Olympic champion Yui Ohashi of Tokyo. Both swimmers won that event during their most recent matches.

The men’s 200 breast will feature match 7 winner Erik Persson of Iron go against multi-time event winner Daiya Seto of the Tokyo Frog Kings. Just like the women, Aqua’s Nicolo Martinenghi is expected to be stronger in the 50 breast over the 200 breast. Be on the lookout for top three-capable swimmers NY’s Marco Koch and Tokyo’s Yasuhiro Koseki in both breaststroke events as well.

In the women’s 4×100 free relay, Iron and Aqua’s top relays could likely partake in a wire-for-wire race with their equally-talented quartets. Iron is set to have Ranomi Kromowidjojo, Barbora Seemanova, Veronika Andrusenko, and Costanza Cocconelli while the Centurions have gathered Holly Barratt, Mariia Kameneva, Lidon Munoz, and the Federica Pellegrini. In match 7, that Iron relay placed third at 3:31.26 while Aqua’s top relay finished second in match 6 at 3:31.12.

The men’s 4×100 free relay could be a battle between Tokyo and Aqua. While the Centurions have a speedy line-up of Alessandro Miressi, Szebasztian Szabo, Thomas Ceccon, and Vladislav Grinev, Tokyo’s Nandor Nemeth anchored 46.28 during match 6 to touch out the Aqua relay for second place. In the medley relays, Nemeth put up a faster 46.12 to again place higher than the Aqua men.