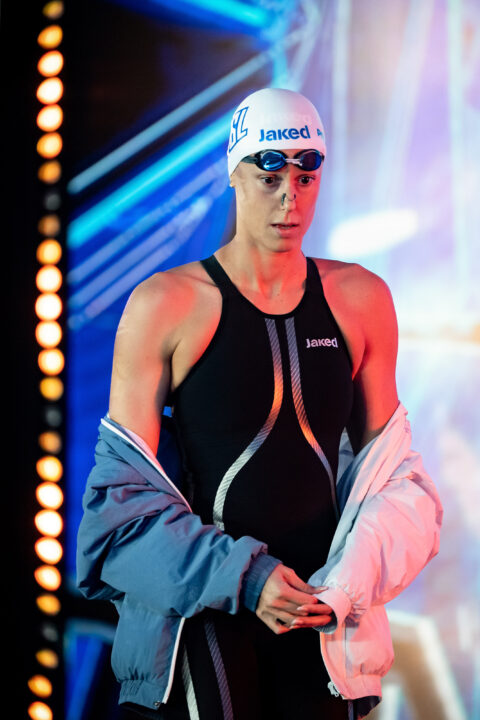 Match 10 offers us a preview of what Match 11, the "play-in" match, will look like as 3 of these 4 teams will be there vying for a spot in the play-offs. Current photo via Giorgio Scala/Deep Blue Media

Match 9 may have offered us a glimpse of the ISL season 3 final as we expect at least two (Energy Standard and London Roar), and possibly three (Toronto Titans?) of the teams that swam in Match 9 to make the final. Match 10, on the contrary, offers us a preview of what Match 11, the “play-in” match, will look like as 3 of these 4 teams will be there vying for a spot in the play-offs.

Match 10 will be the first team win in franchise history for one of the four teams competing, regardless of which it is. Other things are on the line though, namely, a ticket to the play-offs.

These are the stakes, per Barry Revzin:

Any scenario that involves the New York Breakers winning is fun to speculate but also too unlikely to actually include in this preview as a realistic outcome. Put simply, even if New York were to win this match they’d do absolutely no better than tie for 6th in the league standings, resulting in another tie-breaker scenario, which they lose unless the Aqua Centurions also place 4th in Match 10. In that case, New York and Aqua go to a 4 x 50 mixed medley relay to determine who advances to Eindhoven and who goes home. Though this would be dazzling to witness it is unlikely to happen.

Team Iron has perhaps the most robust butterfly crew of the four competing this weekend. Nicholas Santos is extremely dangerous in the 50 fly and can muscle out a good 100 also. Luiz Altamir Melo compliments Santos as Iron’s 200 flyer, while Mikhail Vekovishchev and Thom de Boer play supporting roles in butterfly. Alys Thomas, Maria Ugolkova, Ranomi Kromowidjojo, and Emilie Beckmann cover all the bases for Iron in women’s butterfly, and Kromowidjojo would have a great chance at a skins victory if butterfly is chosen.

The Tokyo Frog Kings boast a small but mighty butterfly crew Aly Tetzloff, Harriet Jones, and Leah Gingrich on the women’s side, and Takeshi Kawamoto and Daiya Seto on the men’s. Seto and Gingrich are both serious contenders for a victory in the 200 fly.

Finally, New York Breakers have a couple of standout performer in Svetlana Chimrova and Matt Temple, but Arina Surkova, Jakub Majerski, and Joe Litchfield will really need to step up to earn New York any significant points in butterfly.

Tokyo Frog Kings have a great trifecta of backstrokers on the men’s side with Grigory Tarasevich, Richard Bohus, and Takeshi Kawamoto. Men’s backstroke could be a major success for the Frogs this weekend. Their female backstrokers aren’t quite as competitive but should still bring in some decent points. This crew consists of Catie DeLoof, Gabby DeLoof, Cassie Wild, Aly Tetzloff, and Paige Madden.

The Aqua Centurions have a lot of swimmers that can swim backstroke though none of these individuals have put up a particularly good time yet in season 3. Silvia di Pietro, Mariia Kameneva, Martina Caramignoli, Laura Taylor, Federica Pellegrini, and Holly Barratt bring up the women’s roster. On the men’s side, Thomas Ceccon is Aqua’s best chance for any significant backstroke points, and he is supported by Matteo Ciampi, Stefano Ballo, and Alessandro Miressi.

Iron’s Robert Glinta seems to have gotten better as the season has progressed, as has Ingeborg Loyning.  Guilherme Basseto, Africa Zamorano, Lorenzo Mora, and Silvia Scalia will all need big swims to net any significant points though.

Alicja Tchorz has been pretty solid for the New York Breakers this season in sprint backstroke, but their roster is a bit thin after her. Daryna Zevina and Paulina Peda have been decent, though Oleg Braunscheig, Brandonn Almeida, and Joe Litchfield are all yet to deliver a memorable swim this season.

The Aqua Centurions are the odds-on favorites for all of the breaststroke events on the men’s side, thanks to Arno Kamminga, Fabio Scozzoli, and Nicolo Martinenghi. Martina Carraro and Arianna Castiglioni are also pretty strong on the women’s side, but not nearly as dominant compared to the rest of the league.

The Tokyo Frog Kings are probably the only team competing in Match 10 that could foil Aqua whatsoever in breaststroke. Daiya Seto, Yasuhiro Koseki, and Alessandro Pinzuti are a strong but formidable group, while Kanako Watanabe and Miranda Tucker have their work cut out for them but could put some decent points on the board for Tokyo.

Team Iron has a small but strong breaststroke roster with Erik Persson, Emre Sakci, Bernhard Reitshammer, Ida Hulkko, and Jenna Strauch. Though Sakci was the breakout star of season 2 he has not been on in 2020 and Persson has largely taken over his role, though Persson is best at the 200 whereas Sakci was better at the 100 and the 50. Hulkko and Strauch both show promise and should be good for some points, but it would be an upset if either of them won a race.

Similar to Iron, the New York Breakers have a small but stout breaststroke crew with Molly Renshaw, Abbie Wood, Tes Schouten, Marco Koch, and Philip Heintz. Renshaw and Wood have delivered some great swims this year, though the others have yet to win New York any significant points in Naples.

On paper, the Tokyo Frog Kings have a well-rounded freestyle roster, though we’re yet to see one of Tokyo’s freestyle specialists really hit their stride in season 3. Paige Madden and Aly Tetzloff  have been pretty solid so far this year, though Gabby DeLoof, Julie Meynen, Chihiro Igarashi, and Mallory Comerford need to pick it up for Tokyo’s female freestyle crew to make noise. On the men’s side, Nandor Nemeth, Pedro Spajari, Ivan Girev, Maarten Brzoskowski, and, most of all, Vladimir Morozov, also need to up their game if they’re going to score many points or be strong in the free relay.

The Aqua Centurions have a very strong freestyle group on both the women’s and men’s side. Silvia di Pietro, Mariia Kameneva, Martina Caramignoli, Laura Taylor, Federica Pellegrini, and Holly Barratt cover all the bases from the 50 to the 400, and can combine for a mean freestyle relay. Aqua is not quite as deep on the men’s side but Matteo Ciampi, Stefano Ballo, Alessandro Miressi, and Thomas Ceccon are also very strong from the 50 to the 400 (though they struggle a little in the 200).

Iron has one of the most lopsided freestyle rosters in the league this season. The women’s side is extremely strong from the 50 to the 400 with Ranomi Kromowidjojo, Costanza Cocconcelli, Barbora Seemanova, Veronika Andusenko, Melanie Henique, and Silvia Scalia. This is a seriously robust group with the ability to place top-4 in all of the freestyle races and make a highly-competitive relay–or two! The men’s side, however, falls off pretty fast after Thom de Boer and Marco Orsi. That is not to say Iron’s male freestylers are bad, they all have very impressive resumes, however, they have not hit their strides yet in season 3 and therefor represent a weakness for Iron. This group includes Matt Richards, Luiz Altamir Melo, Lorenzo Mora, and Mikhail Vekovishchev.

The Tokyo Frog Kings have two dominant performers in Daiya Seto and Yui Ohashi. Seto will be the favorite to win both the 200 and 400 IM, while Ohashi could win either of those races–she has yet to find her form in short course, but she’s the Olympic gold medalist in both races. Leah Gingrich and Daniil Pasynkov play supporting IM roles for Tokyo and have proven pretty reliable for a few points in any race they swim.

The Aqua Centurions have an incredible IM duo in Chase Kalisz and Ilya Borodin. Even if Seto wins both the 200 and 400 IMs, these two could be 2nd and 3rd. Thomas Ceccon is a great weapon in the 100 IM, a race that is pretty wide-open this weekend. Aqua’s women aren’t quite as dominant in the IM, but Mariia Kameneva, Rika Omoto, and Fantine Lesaffre are all at least reliable as depth swimmers.

Iron has two men capable of placing top-4 in the 100 and 200 IMs: Leonardo Santos and Marco Orsi. Their only other male IMer, Erik Persson, is much better in breaststroke and has yet to score any significant points in IM. Iron is pretty weak in women’s IM, and Maria Ugolkova, Africa Zamorano, and Constanza Cocconcelli will need big swims to get any meaningful points this weekend.

The New York Breakers have two standouts in Abbie Wood and Brendon Smith, both of whom could win one or more of the IMs this weekend, though Wood is more likely to pull a 200/400 double than Smith. Beyond these two, New York’s IMers are Joe Litchfield, Stan Pijnenburg, and Marrit Steenbergen, none of whom have been particularly impressive in season 3.

Due to their depth in freestyle, it’s hard to give an edge to any freestyle relay team other than Iron. The Aqua Centurions will surely give them pressure though, and may be able to net more points total even if they don’t combine for the winning foursome. Tokyo could surprise if all their swimmers are on form, though New York doesn’t have the depth on the women’s side to do much in the freestyle relay.

The Aqua Centurions and the New York Breakers have the strongest men’s free relays (on paper), while we expect Iron to struggle in that one. Tokyo, however, is a wild card in the men’s free relay.

This is easily the most difficult match to predict so far in season 3. The Aqua Centurions, Team Iron, and the Tokyo Frog Kings all have some huge upsides, though it is the Aqua Centurions that seem to have the most bases covered.

Where is swimswam live recap?

Come on swimswam, this is the match that can give us indications about which two teams will be out. New York seems like a lock, but the other one is still open.

Aqua for the win and for the crowd in Naples !

I think it’ll be between Aqua and Tokyo.

This match looks crazy. I hope all of the teams will be in good shape and we will see a good fight for the play-off.
Hope we can actually watch it somewhere.