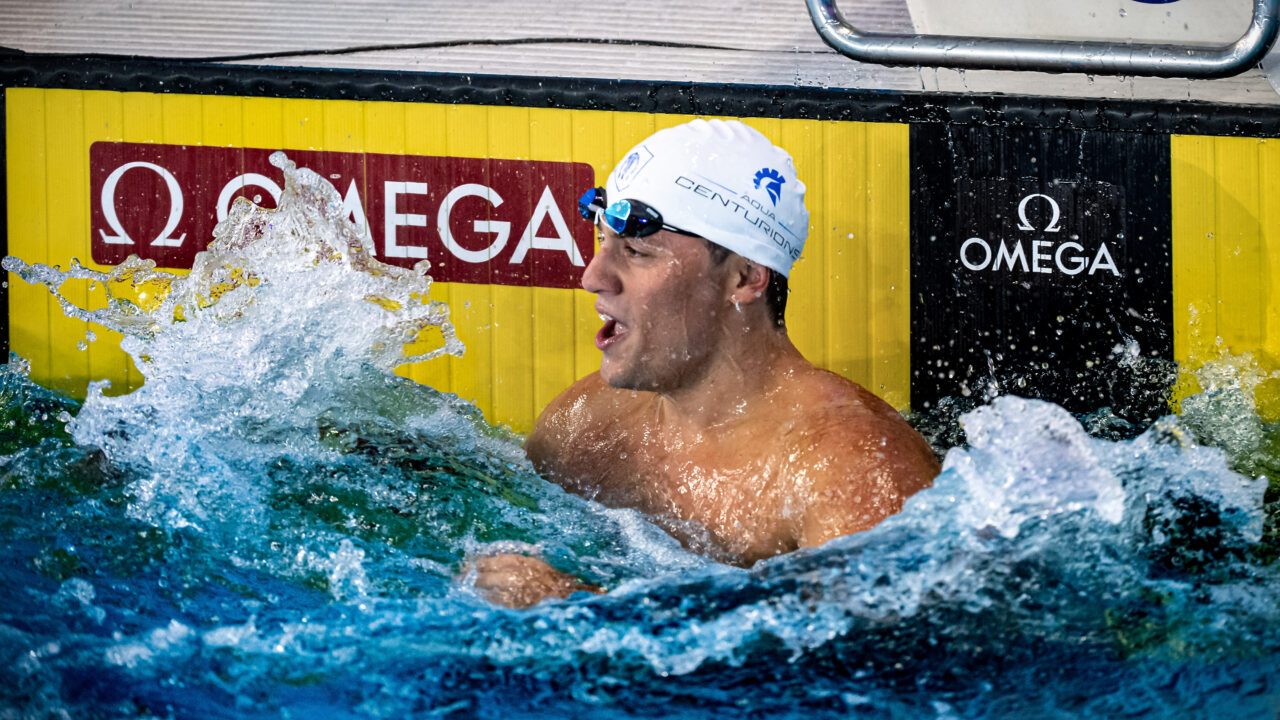 Nicolo Martinenghi and the Aqua Centurions are in a great spot to finish sixth in the ISL regular season and avoid having to compete in the play-in match. Archive photo via Giorgio Scala / Deepbluemedia / Insidefoto

In Season 3 of the ISL, the top eight teams make the playoffs. The rules for doing so are that the top six clubs by points automatically advance, and then the bottom four teams have a play-in match.

The current ISL standings have a clear top five and a clear bottom five. The Cali Condors, Energy Standard, LA Current, London Roar, and Toronto Titans each have at least 10 points, while the Aqua Centurions, Iron, DC Trident, Tokyo Frog Kings, and NY Breakers each have at most six points.

The question is: Which one of those bottom five teams will finish in sixth place and avoid having to compete in the play-in match to make the playoffs?

But let’s go over the rules to find out why that is. The current standings are:

In the last two matches, DC has to face Energy, London, and Toronto in Match 9 where they will likely finish fourth. That still puts them behind the Centurions.

So let’s look at Match 10, featuring the other four of the bottom five teams: Aqua, Iron, Tokyo, and NY.

If Aqua wins Match 10, they finish the season with 10 points, clearly ahead of the four other clubs and finish sixth overall.

If Aqua finishes second, they would have nine points. If someone other than Iron wins (either Tokyo or NY), they would still be the top team and advance.

If Aqua finishes second and Iron wins, they would tie at nine points. At this point, we go through the tiebreakers, which are:

For the Aqua vs Iron tiebreaker, they have never swum against each other before, so this would be the first and only match that counts. If Aqua finishes second and Iron wins, then Iron advances by virtue of having outscored Aqua.

If Aqua finishes third and Iron wins, then Iron advances.

If Aqua finishes third, Tokyo wins, and Iron finishes second, then all three teams would be tied at eight points. Tokyo would beat Aqua by the first tiebreaker short of a dramatically close matchup (Aqua currently has outscored Tokyo by three points but if Tokyo beats Aqua by two places it seems pretty likely that they would outscore them by more than that), and Iron would also beat Aqua by the first tiebreaker. Tokyo and Iron have also never raced, so Tokyo would beat Iron on the basis of this tiebreaker as well. As a result, Tokyo would advance in this scenario.

NY seems pretty likely to finish fourth, or at least no higher than third.

The most likely outcome, though, is that Aqua and Tokyo finish top two (in some order) and Iron and NY finish in the bottom two (likely in that order), and all of those outcomes lead to Aqua advancing.