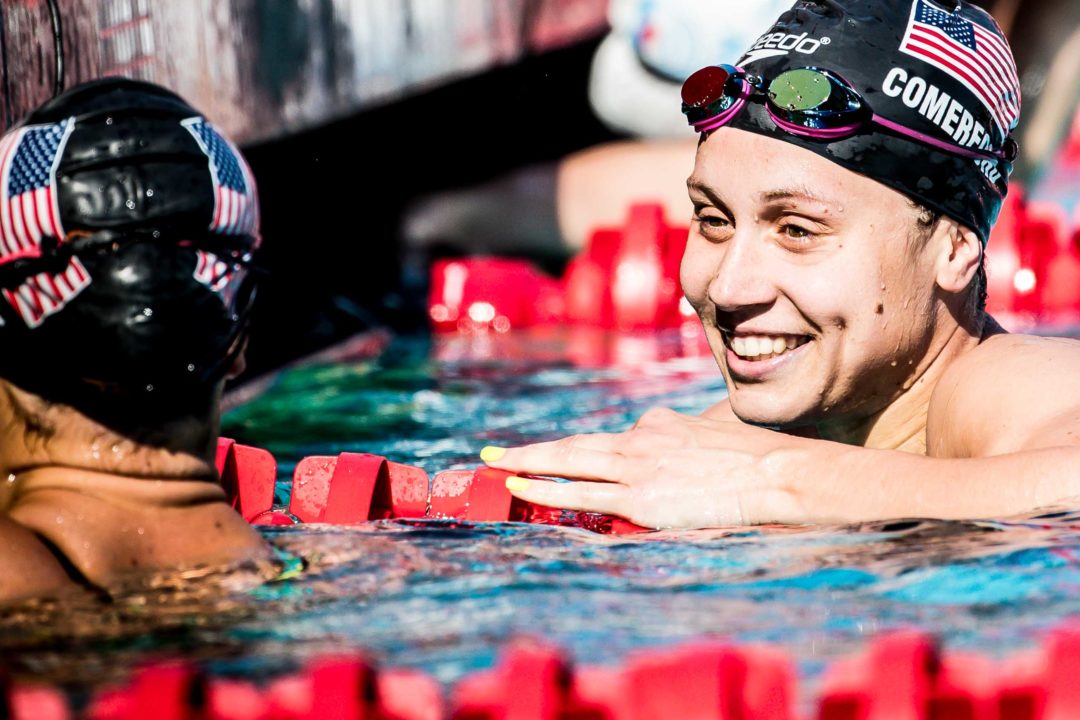 We’ve also got Kathleen Baker swimming the 200 back, where she was the World Champs bronze medalist back in 2017.

Ally McHugh won this one easily, adding to her 800 free and 400 IM victories from earlier in the meet. The time doesn’t approach McHugh’s lifetime-best (16:02.56), but should move her easily to the #1 time among American women this season – pending, of course, the results of other U.S. Open meets this morning.

Prior to this weekend, no American woman had been under 16:49 in the event this season. Second-place Rachel Stege would move to #3 among U.S. women this season, though we expect a few more sub-17s to roll in this morning.

Kathleen Baker didn’t have to do too much to get the win here. She was the top seed by six and a half seconds and won by just over two.

Baker was about five seconds off her best time in a pretty sleepy morning session. But her 2:11.38 is the fastest time put up by an American this season, at least prior to other U.S. Open results today. Baker went 2:06.46 back in March of this year at the Des Moines Pro Swim Series, and ended that 2019-2020 season ranked #2 among American women. #1 Regan Smith should swim later today in Des Moines.

Mallory Comerford cruised to the win here in 55.21. Comerford, who has won seven World Champs gold medals on relays, would be the #2 American this year, pending other U.S. Open results today. She was well off the 52.59 she hit back in 2017, and also a ways off the 53.87 she had swum in the Des Moines Pro Swim Series in March, just before the pandemic hit.

Fellow Louisville postgraduate Casey Fanz was second in 56.18, about eight tenths of a second off her best time.

Current high school junior Kristina Paegle had probably the most notable swim of the field. The 16-year-old cut her personal best from 58.3 to 56.2 to take third place overall. Paegle swims for Indiana Swim Club and is a verbal commit to the Indiana University for the fall of 2022. With this swim, she moves to #70 all-time in USA Swimming’s 15-16 ranks.

National teamer Gabby DeLoof was fourth, four tenths back of Paegle in 56.60. She actually tied with another 16-year-old, Zoe Skirboll for fourth.

Indiana Swim Club’s Laura Morley won the 200 breast here, after finishing 5th in the 100 breast last night. Morley, the national record-holder of the Bahamas, has been as fast as 2:27.8 in her career, setting that mark at U.S. Open last year. She was two and a half seconds off that here, but only about a second off her 2020 best from the Knoxville Pro Swim Series in January.

Her training partner Noelle Peplowski was second in 2:30.52. Prior to today, no American had been faster than Peplowski’s time this year.

The former national leader was 15-year-old Aislyn Barnett, who competed well here with a third-place showing. The Aces Swi Club teenager was 2:31.35, only about seven tenths off her best time, which ranks #36 all-time in the 15-16 age group despite Barnett being on the younger end of that age bracket.

Michigan’s Olivia Carter took the win here, going 2:10.52 to surpass Charlotte Hook for the top time among American women this season. (Again, pending the results of the eight other U.S. Open meets this morning, which should feature some top challengers).

Louisville’s Alena Kraus was 2:14.17 for second, well behind Carter, but also faster than any American woman besides Carter and Hook had been this season.

16-year-old Martina Peroni continued a strong meet. The New Albany Aquatic Club flyer went 2:14.30, taking almost a full second off her lifetime-best. Peroni is a high school junior who should be just outside the top 100 in USA Swimming history for the 15-16 age group.

She came in six tenths ahead of Louisville freshman Tristen Ulett, who is 18 years old. 15-year-old Hannah Bellard was 2:16.37 for fifth in a very young field.