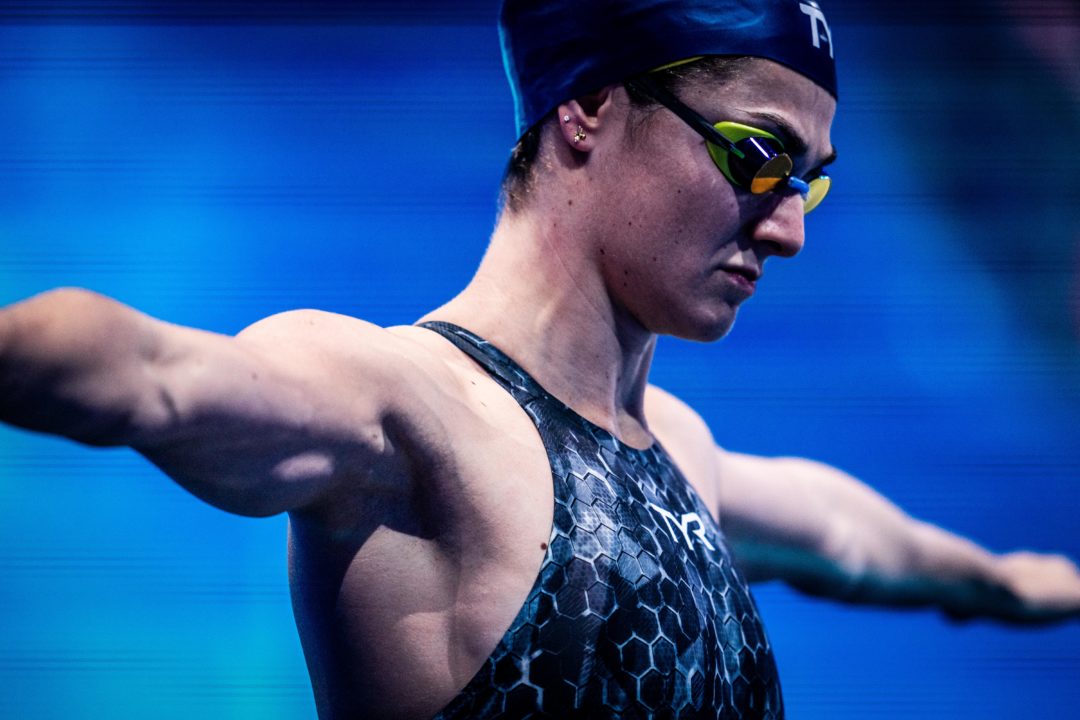 Gastaldello was the third-highest point scorer during the 2020 ISL season, winning 20 races across six different events. Archive photo via Mine Kasapoglu

While France’s Beryl Gastaldello surprised many by proving to be one of the most valuable commodities in the inaugural season of the International Swimming League last year, finishing 10th in the season-long points race, it was nothing compared to what she had in store for 2020.

Gastaldello, a 25-year-old native of Miramas, made the jump from being her club’s top scorer in 2019 to becoming a top-three swimmer in the league overall in Season 2, earning her the 2020 Swammy Award for European Female Swimmer of the Year.

With the year’s major international competition — the Tokyo Olympic Games — postponed due to the coronavirus pandemic, 2020’s awards certainly skew towards a short course specialist like Gastaldello, who was able to put her abilities on display for five straight weeks in Budapest when not much else had happened in the sport for several months.

And while the short course emphasis of the year certainly favored her, the former Texas A&M Aggie left little doubt that she was the top European female of 2020.

Gastaldello was a revelation in her second ISL season with the LA Current, amassing a staggering 20 individual victories over six matches. This includes her freestyle skins win in Match 3, and the number might’ve been even higher if breaststroke wasn’t the selected skins stroke in all five of her other matches. The season’s third match also saw her win MVP honors with 78 points.

The 2016 Olympian finished the season ranked third overall in individual points with 340.5, trailing only Caeleb Dressel (463.5) and Lilly King (350.0). If Gastaldello had a bit stronger of a supporting cast and the Current women managed a few more medley relay wins, giving them the chance to pick a stroke other than breast for the skins, Gastaldello would be in position to surpass King and hold the distinction as the league’s most valuable female swimmer. Given that her 20 wins came across six different events — 50 free, 100 free, 50 back, 50 fly, 100 fly, 100 IM — there’s an argument she already is given her versatility.

In terms of times, Gastaldello reset the French National Record in the 100 free and 100 IM twice during the season, bringing her times down to 51.16 and 57.30, respectively, ranking her seventh and third all-time. At season’s end she was the league’s fastest swimmer in both the 100 IM and 100 fly (55.32).

In the long course pool, Gastaldello closed out the year by qualifying for her second Olympic team in the 100 free, hitting a personal best of 53.40 at the French Elite Championships in December to get under the country’s mandated standard of 53.53. She also swam to a best time in the 50 free (24.87), placing third, and was second in the 100 fly (58.09) in Saint-Raphaël, with another opportunity to qualify for the Games coming in June. The French Olympic standard in the 50 free is 24.53, while the 100 fly time stands at 57.51.

Should have been Kira. She broke a WR