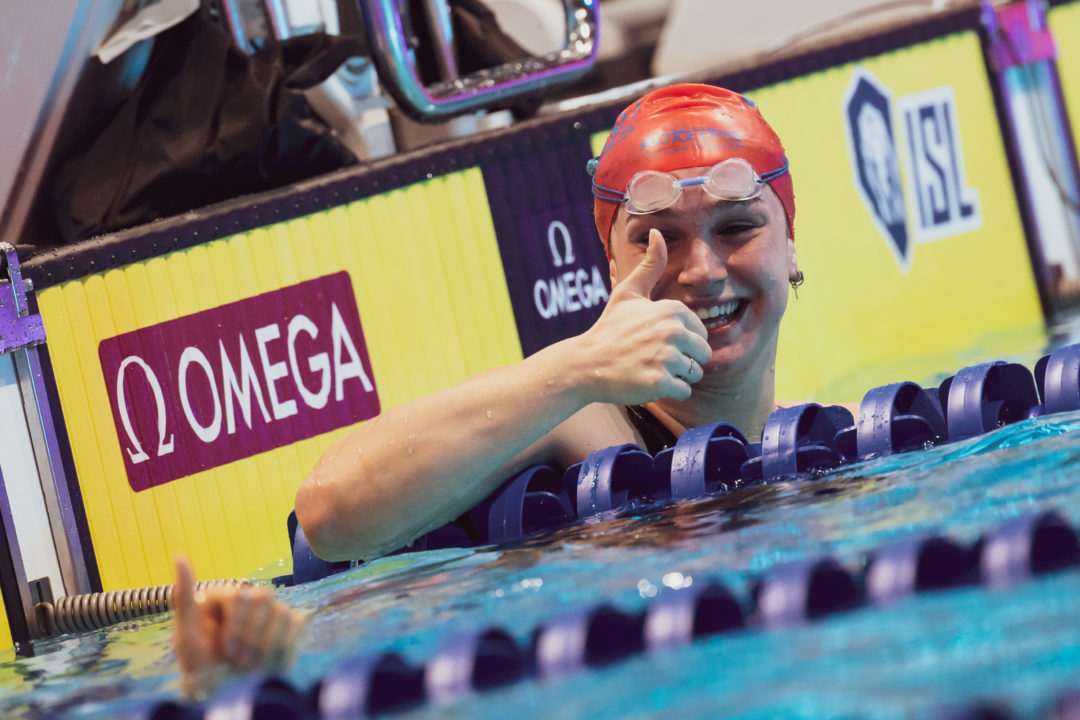 15-year-old Benedetta Pilato of Italy just made her nation's Olympic team in the women's 100 breaststroke with a new national record to boot. Archive photo via Mike Lewis/Ola Vista Photography

Remarkably, Pilato’s previous personal best entering this competition rested at the 1:07.06 she logged in Casarano this past July. As such, the teen hacked more than a solid second off of the fastest time she had ever produced en route to taking over the previous Italian senior record 1:06.36 Carraro put on the books at the 2019 FINA World Championships for bronze.

As quick as Pilato was today in Riccione, she still has a ways to go to get into the realm of retired Olympic champion Ruta Meilutyte’s World Junior Record of 1:05.21 from 2014.

Pilato already owned Italy’s fastest 50m breaststroke performance of all-time clocking a new national record of 29.98 in the heats of the event at last year’s World Championships. She wound up taking silver in a final time of 30.00.

Pilato has since taken the 50m breast down to 29.85 at this year’s Sette Colli Trophy.

Those qualifying standards are absurd. Interested to see how many Italians actually will go to the Olympics.

There are already 11 qualified so…
Plus athletes like detti, miressi, carraro, megli, scozzoli, pellegrini still have to qualified.

The reasoning behind the stiff qualifying times is that they don’t want to send overseas swimmers who do not have a chance to enter finals. But these standards aren’t carved in stone. There is another qualifying meet in 2021 with easier marks, and there is also room for discretion on the part of the coaches.

Basically this the times are designed so everyone on the team can get in the top 8.

As I said Flo Manaudou was 21.9 at french trials in 2012 but was crowned Olympic champion at the london games. Setting stiff qualifying times comparing to FINA A CUT is just nonsense

Anyone else feel like Pilato has been 15 for two or three years?

It’s worse! I feel she’s like 20 years old and she’s been around for ages!

She was 13 the first time she won a medal at Italian Championship (silver in December 2018).

Flo Manaudou and Nathan Adrian at there respective olympic trials in 2012 were above these italian qualifying times (21.9 and 48.1). It is nonsense, what is this trend of setting insane OQT for some countries? Wanting swimmers to peak at the trials?

Control by old men who make political decisions on who goes. The athletes need to take a stand.

Sometimes the restrictions are set by the NOC (National Olympic Committee – SOC = Swedish Olympic Committee). For the 2012 Olympics the Swedish NOC said that an athlete had to have reasonable chance for a top finish at the Olympics to be selected. There were athletes that won qualifying events or had a top 12/16 world ranking before the Olympic games but were not selected.
Sweden who has a few good swimmers but not an abundance had Simon Sjodin who in 2012 was under the FINA A cut several times and was ranked Top 20 in the world at the time but the Swedish NOC (SOC) did not select him (he was nominated by the Swedish Swimming Federation).
… Read more »

Simon came back the following year (2013 World Champs) and was 4th in the prelims of the 200 IM (in the final he was slower and finished 8th).

An interesting note – rana means frog in Italian (frog kick) for breastroke. Also those are some fast qualifying times!

Out of interest, how do the Olympics handle having under 16/18s there? Do they stay in the village, can their parents accompany them etc?

It’s pretty common in quite a few sports to have kids qualify, but plenty of articles suggest things can get pretty wild in the village after athletes finish competing and not sure I’d want my 15 year old there for that!

According the biographies of American Olympians they go home as soon as swimming is over.

Although some girls took a 14 year old Amanda Beard to a dive bar outside of the village.

Think I remember reading that MP came back to the USA straight after the end of the swimming in 2000.

Pretty sure the village is for athletes/authorised staff only. MP roomed with a teenage Piersol I think at those games.

They all stay in the village.

They would be safer in the Village than.what USAG exposed their girls to in hotel rooms.

The British team will have everyone they want on it… plenty of discretion in there!!

Optimistic about the male breaststrokers I see! I don’t see that happening though.

Luca Urlando. He dislocated his shoulder and has missed the 2020 season because of it, so COVID actually ended up being a sort of blessing for him. He’ll likely be fully recovered for trials.