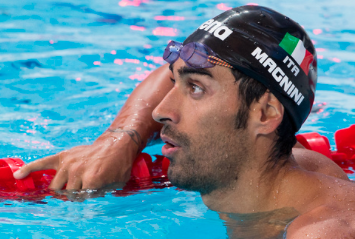 With the Italian Open Championships kicking off on Thursday, the entry lists have been published, giving us a good glimpse into the caliber of talent. Archive photo via Tim Binning/TheSwimPictures.com

With the Italian Open Championships kicking off on Thursday, the entry lists have been published, giving us a good glimpse into the caliber of talent ready to race in Riccione.

In addition to the key elite players to the tune of Federica Pellegrini, Alessandro Miressi and Federico Burdisso, just to name a few, a just-out-of-retirement Filippo Magnini is appearing across multiple events.

38-year-old freestyle Magnini revealed just last month that he was coming out of retirement after nearly 3 years away from competition. Amidst his accolades, including an Olympic bronze medal in the men’s 800 free relay at the 2004 Games in Athens, Magnini was also involved in a doping scandal that almost cost him his career.

In his appeal to NADO, Magnini “objected to the facts found against him by the Italian National Anti-Doping Tribunals.” Both swimmers appealed their bans with a national anti-doping tribunal. Santucci won his appeal and had his suspension dropped, but Magnini’s appeal was rejected.

Magnini pursued a case with the Court of Arbitration for Sport (CAS) and was successful. In February of 2020, CAS officially overturned Magnini’s suspension.

The freestyle ace is entered in the men’s 100m and 200m freestyle events here in Riccione. Of note, world champion Simona Quadarella and Olympic medalist Gabriele Detti are absent from the entry lists.

Below are the key swimmers slated to compete: