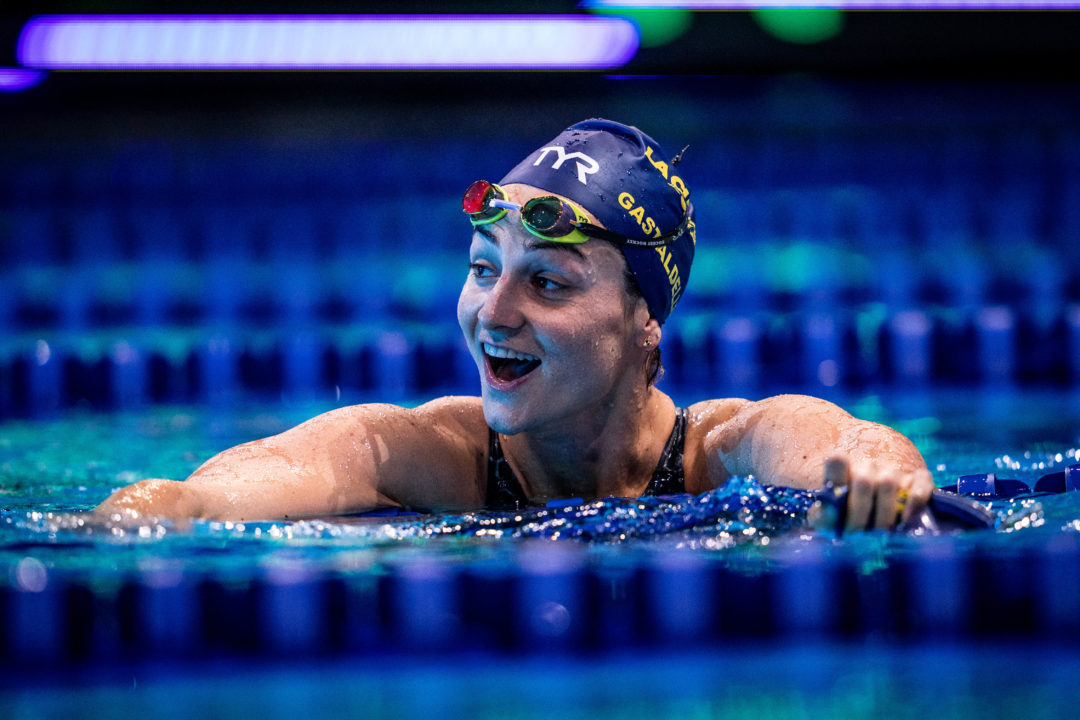 Beryl Gastaldello's long course swimming here at these 2020 French Elite Championships is picking up right where her on-fire short course racing left off. Archive photo via Mine Kasapoglu for ISL

The 2020 French Elite Championships wrapped up its day 1 finals tonight from Saint-Raphaël, with the meet representing an Olympic qualifying affair.

The former Texas A&M Aggie punched a time of 54.43 this morning to sit as the 3rd seeded swimmer behind Marie Wattel and Charlotte Bonnet. Wattel topped the heats with a speedy 53.90 while the current national record holder in the event Bonnet was right behind in 53.97.

Come tonight, however, Gastaldello had designs on not only taking the French title but also qualifying for the 2020 Olympic Games, which the 25-year-old did in spades.

Additionally, Gastaldello’s 53.40 now checks her in as the 2nd fastest French woman of all-time, sitting only behind Bonnet whose national record stands at the 52.74 she produced over 2 years ago.

Wattel settled for silver tonight in a time of 53.72, which also clears the FINA standard, as did Bonnet’s bronze medal-worthy time of 53.82.

Following up on his solid 52.81 morning swim in the men’s 100m fly, national record holder Mehdy Metella hit nearly the same mark en route to taking 2nd place in tonight’s final. Still testing out his shoulder since having surgery this past January, Metella produced a time tonight of 52.86 to take the French title, but got to the wall behind winner Jeremy Desplanches of Switzerland.

Desplanches touched in a time of 52.44 ahead of Metella, while ASU-commit Leon Marchand rounded out the top 3 in a big personal best of 52.89. You can read more about Marchand’s French Age Record for 18-year-olds in this event here.

Going back to Metella, as we reported in our meet preview, the 28-year-old had already competed in a local meet in October but at the time his coach Julien Jacquie indicated the swimmer was intentionally not going full speed. The coach/athlete duo merely had the goal of  “testing his shoulder at these levels of engagement.”

Olympic qualification was achieved by Frenchman Geoffroy Mathieu in the men’s 200m backstroke. The 23-year-old produced a solid outing of 1:57.07 tonight to represent the only swimmer to delve under the FINA ‘A’ cut of 1:57.50 needed for the Olympic Games.

Tonight’s effort marks Mathieu’s 2nd fastest performance all-time, sitting just a hair outside the 1:57.04 result he registered in 2017. That effort rendered him as France’s 2nd fastest swimmer ever in the men’s 200m back.

Kirpichnikova touched in a time of 8:22.65 to hack over 5 seconds off her previous PB and represent the only sub-8:30 swimmer tonight. Her outing produced a massive new Russian national record. You can read more about here performance here.

Wondering about Bonnet’s dip in form.

I think beryls gonna have a breakout meet potentially at the Olympics if she maintains her spot.