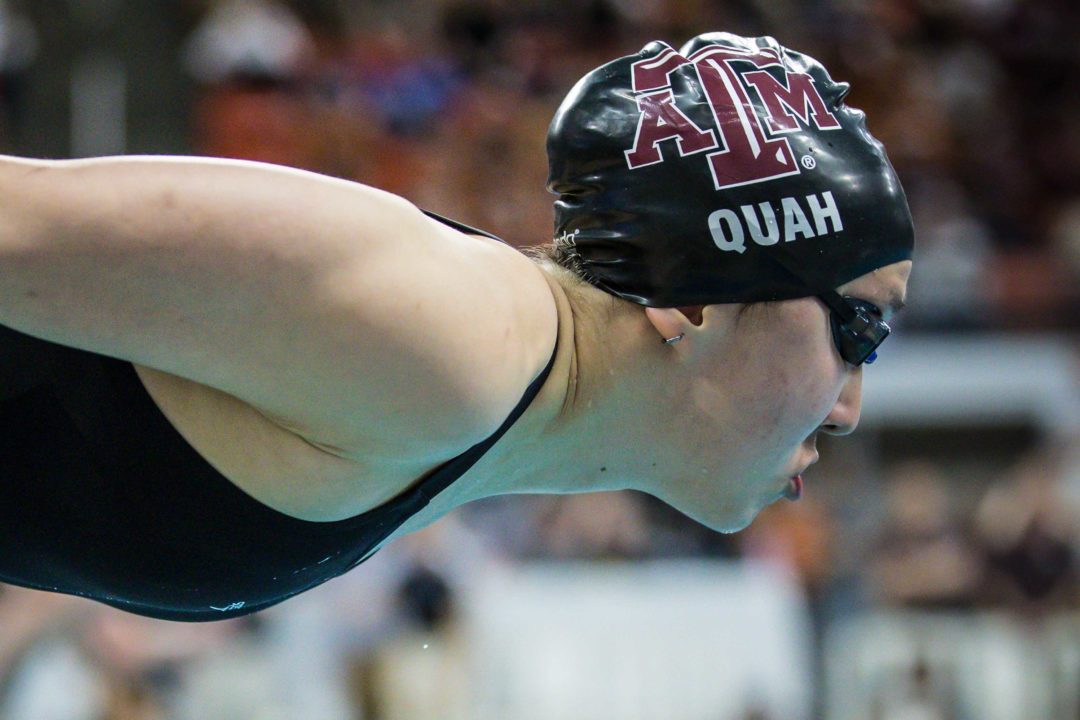 Texas A&M, the 2019 champion, leads the scoring in the individual events. They have the most championship finalists (4) and the most total scorers (11). Archive photo via Jack Spitser/Spitser Photography

The 2020 SEC Championships continued this morning in Auburn, Alabama with prelims of the 200 fly, 100 back, and 100 breast. We’ll see swimmers compete for medals in those races tonight, along with the 400 medley relay and men’s platform diving. Read on for the up/mid/down tracking of this morning’s preliminary events, and how it may impact the team standings.

(Note: Does not include relays or diving)

Diving will play a big factor in how the top 5 shakes out at the end of the day, but it doesn’t look like anyone will be able to catch Florida tonight. Things could change up in the top 5 as Missouri (11) and Tennessee (10) lead with the most scorers tonight. Florida, Bama, and Tennessee are tied with the most championship finalists (4 each).

(Note: Does not include relays)

Texas A&M, the 2019 champion, leads the scoring in the individual events. They have the most championship finalists (4) and the most total scorers (11). Kentucky is only half a point ahead going into tonight, so it’s feasible for the Aggies to move into the top 3. They even have a shot at closing in on Florida for 2nd. It doesn’t look like anyone will be catching Tennessee, though.

Georgia is in position to catch Auburn for 5th. Alabama may close the gap, but they probably won’t have enough to move ahead of Auburn yet. South Carolina will battle to move ahead of Missouri , Arkansas, and LSU for a top-10 ranking.

Of course you see that Tennessee men have 10 swims tonight compared to the girls 8. Men have 4 A finals to the women’s 3. Do you even watch the results or just make comments to sound uneducated?

Tennessee women look quite good. But that doesn’t mean the men aren’t swimming well. They actually look very good and have surprised me all season. They certainly don’t have the firepower the women do but they are swimming very well. I have watched them win tight races all week and are putting a number of men in finals. In all fairness, they actually out swam the women this morning. They just aren’t in the hunt to win the SEC this year.

Agree with both comments – Vols are swimming quite weil. They are young and just need a bit more depth and seasoning. The winning formula is being built!

Strong morning for Tennessee and Bama men. It’s going to be a competitive meet for those next few spots in the team race.

Can A&M women catch the Lady Vols and Florida? That was a good prelim for them.