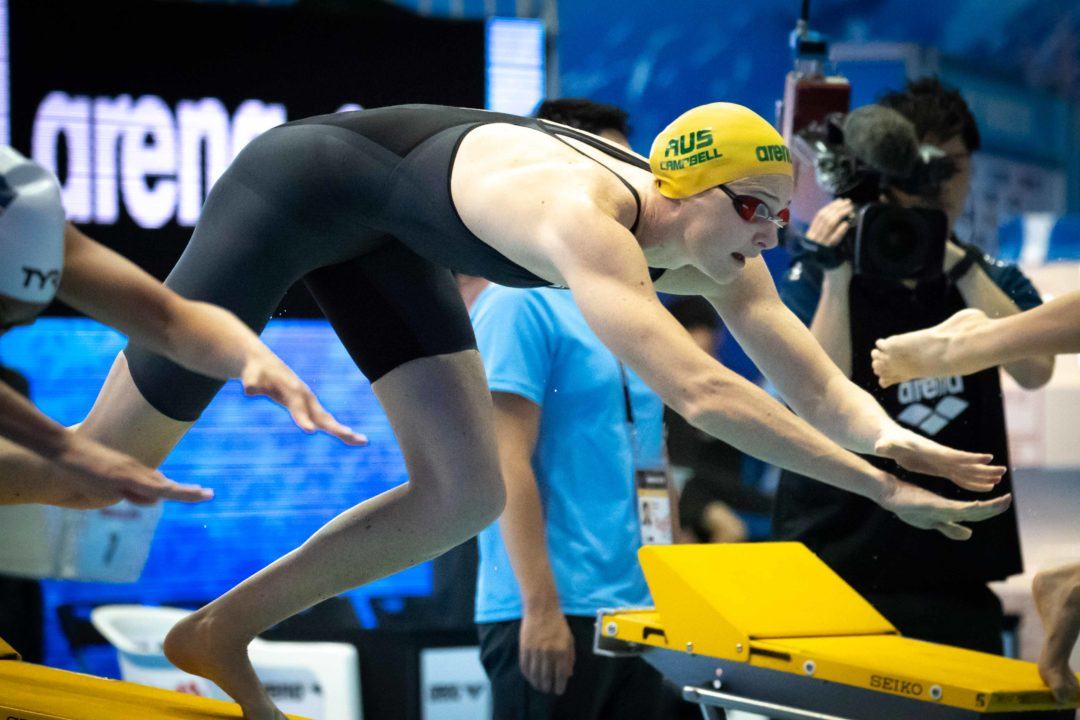 The Australian women have been dominant here since 2014. Their lone major loss? The 2017 World title, to the Americans. But revenge is on the table in 2019. Archive photo via Mike Lewis/Ola Vista Photography

The Australians lost this relay in 2017 with star Cate Campbell absent. But outside of that rare stumble, the Australian women have been pretty much unbeatable in this event over the past five years, winning 2014 Pan Pacs, 2015 Worlds, 2016 Olympics and 2018 Pan Pacs while setting and resetting the world record three times along the way.

The mainstay of those relays has been the Campbell sisters. Cate and sister Bronte Campbell are one of the most formidable sprint duos in the world. When Australia set the world record at Commonwealths last year, Cate anchored in 51.00 and Bronte was 52.0 on her leg. Cate has been as fast as 50.9 from a flying start, and Bronte has been 51.5. In fact, if Australia’s four legs can all put up their career-best times (per our research, 52.80 leadoff for Emma McKeon, 53.10 split for Shayna Jack, plus 50.93 for Cate and 51.57 for Bronte), we could see the world record skip the 3:29s entirely and sit at 3:28.40. That’s probably not super likely, but smart money would say we see the first sub-3:30 swim in history this month.

Update: Jack has been officially rule out of Worlds. That doesn’t change our predicted finish order, as the dropoff from her (53.1 this year) to Madison Wilson (53.6 this year) isn’t massive. It does make the world record – and our aggressive 3:28 speculation – a little less likely, though.

Australia is a cut above everyone, and the Americans seem to have the advantage over all non-Australia opponents. Olympic champ Simone Manuel and the reliable Mallory Comerford are mainstays – both are solid 52s from a flat start, and it wouldn’t be shocking to see either go 51-high with a great swim. Margo Geer (53.4 individually) is probably the third swimmer, and the fourth spot might come down to Abbey Weitzeil, who was 53.5 last summer, and butterflyer Kelsi Dahlia, who was only 54.0 last season, but split 53.1 on the winning 2017 relay. Another possibility is another swim for Katie Ledecky, who has split 52 before (back in 2016), but that’s probably unlikely, given the American depth in this race.

The next few contenders don’t have the depth of the Americans, but they have the big hitters to challenge for silver if one or more of the American legs are off. The Netherlands have a stellar duo of Femke Heemskerk (52.3 split on record) and Ranomi Kromowidjojo (51.9 split on record). They’ve got three pretty good optoins for the last two spots. Kim Busch has been 54 leading off, and Kira Toussaint hit for a nice 54.4 split last summer.

Taylor Ruck is a rising star for Canada, and they’ve got perhaps the most exciting young roster in this relay. When 2016 Olympic champ Penny Oleksiak isn’t the most exciting name on the relay, you know there’s some fireworks loaded up. Ruck has a huge summer, hitting 51.7/51.8 splits at both Commonwealths and Pan Pacs. Oleksiak hasn’t quite looked as good as she did in winning Olympic gold, but has been 52.9 on a relay as recently as 2017 Worlds. Kayla Sanchez can add a 53-second leadoff leg. The new addition to the relay is Maggie MacNeil, known more as a flyer, but who went 54.5 at Canadian Trials to snag the fourth spot on the relay.

France actually bested the Netherlands for the Euro crown last summer. Charlotte Bonnet split a big 52.2 and Beryl Gastaldello was 53.6 on the end. Throw in Marie Wattel‘s 54.3 leadoff and France was cruising. They’ll need to be at their absolute best to run with the top dogs again, but last year proved that France can show up in the big moment.

Those appear to be the top contenders. The main wild card is Sweden. They boast the individual 100 free world record-holder (Sarah Sjostrom), who could either be a 51-second leadoff or a potential 50-point anchor. But Sweden also has a very small roster for Worlds, and is going to struggle to find three good legs to support Sjostrom. Sweden missed the Euros final last summer with a 10th-place prelims finish while swimming an alternate lineup. When they’re loaded up, they can probably get a 53 from Michelle Coleman and perhaps a 54 from Louise Hansson. The next logical choice from their roster is Hanna Eriksson, who was only 56.4 individually last year and hasn’t broken 57 this year. Depending on how they structure their relay, Sweden could be leading at some point, but they’ll struggle to stay in the top 3 by race’s end.

There are a handful of others fighting for top 8 bids. Denmark won Euros bronze last year and returns all four legs. Pernille Blume had a huge 2018, though she’s been quiet this season. Perhaps she’s saving her big explosion for Worlds. Blume is a solid 52-second leadoff, and Denmark got 54s last year from Signe Bro and Mie Nielsen.

Japan got stung by losing their best swimmer, Rikako Ikee, who is in treatment for leukemia. Their support swimmers are steadily improving, but without Ikee, this relay is missing its centerpiece. Tomomi Aoki can probably split 53, and if Rika Omoto can too, they might make top 8.

China has pretty good depth. They’ll need Zhu Menghui to break through the 53-second barrier (she split 53.09 at Asian Games last year), and might need swimmers like Qiu Yuhan and Wu Quingfeng to hit somewhere in the high 53s. Yang Junxuan is probably a good bet to split 53, or even lead off in 53.9 with a solid drop.

Great Britain should be a threat, but the latest roster we’ve seen doesn’t have Ellie Faulkner on it. Between Anna Hopkin, Freya Anderson and Siobhan-Marie O’Connor, the Brits can put up three pretty solid legs. Anderson has split 52, Hopkin 52 and O’Connor has been 54-low. It’s a big question who the fourth entrant will be, though, or if Great Britain will even contest this relay.

Germany has an outside shot at a top 8 finish, with Annika Bruhn (52.8 split last year) leading the way. And Russia could be in the mix, with Mariia Kameneva a likely 53-second leg.

Think the Aussies are too strong here and with a relatively choke free history on this relay (2017 aside, when they didn’t have C1).

They could plausibly put up 4 of the 8 fastest splits in the whole field.

I wouldn’t really call that a choke .. I think Megan Romano just had an amazing split .. courts has never been a 52s relay swimmer I don’t recall

I don’t blame their loss on Coutts. The Australians were the heavy favorites before that race and lost. I still remember Coutts crying and her teammates comforting her while she is still in the water.

So who do you think “choked” then? Because if I recall cate canobell even swam a 52.3 lead off leg.. not every loss is necessarily considered a choke but just a great race perhaps ..

2013? They swam a NR. Faster than they went for gold in 2012. The American foursome all had the swims of their lives and the Aussies swam to form.

It was one of the most exciting relays ever. Cate blasted a 52.3 and then the USA had to play catch-up the rest of the way. Romano swam like a woman possessed.

Six years later, AUS still has Cate, Bronte and Emma on this relay.

It was Coutts’ fifth swim of the day and it showed while Romano had a great split and clawed back the lead. It was more a case of fatigue than choking. Coutts was always a reliable swimmer she just couldn’t outperform her main rivals Yi Shiwen and Vollmer in big finals.

If you’ve choked in an individual event, you can choke in a relay.

I think getting DQ for an early take off should be considered more a choke as well..