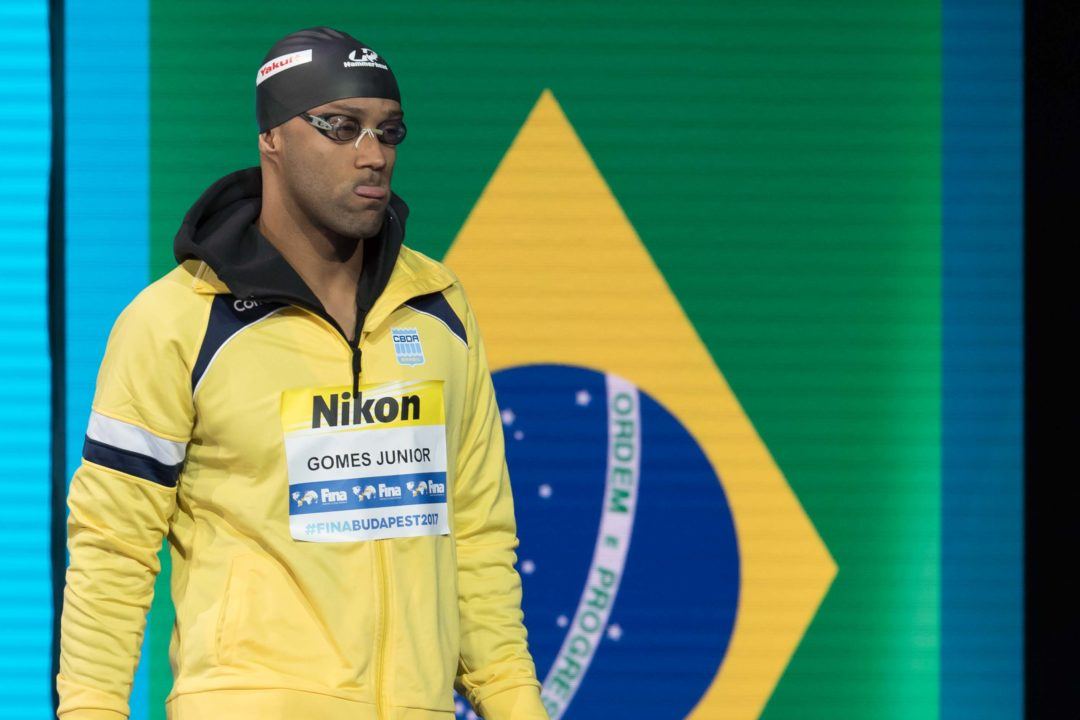 Men’s sprint breaststroke has been headlined by one man since 2015: Adam Peaty. Not only does the Brit hold both world records in the 50 and 100 breast, but he also holds 16 of the top 25 performances in the 50 breast, including writing his name in 8 of the top 10 swims and solely holding the top 5 fastest swims ever.

At the 2017 World Championships, Peaty had already broke the looming 26-second barrier with his 25.95 world record. His fastest swim since then was at the 2018 European Championships when he won the 50 breast title in a 26.09. This year, however, Peaty’s fastest swim was a 26.49 at the 2019 British Swimming Championships. For the current world-record holder and 2-time defending World champion, the only question for Peaty is how fast will he swim this year?

While Peaty appears to be a shoo-in for the 50 breast title, two Brazilian teammates, Felipe Lima and Joao Gomes, may become threats and dethrone Peaty. In 2017, Gomes was the runner-up in the 50 breast while Lima finished in 4th. During the FINA Champions Series, the duo scorched the event going 1-2 in all three stops of the meet. Lima won the event in Ghangzhou while Gomes won in both the Budapest and Indy stops.

At the end of the series, Lima held a 26.68 season best while Gomes held a 26.42 from the 2019 Brazil Trophy meet. Then at the 2019 Mare Nostrum Monaco stop in June, Lima whipped out a top world time of 26.33, setting a new Brazilian and South American record. While Peaty’s lifetime best is nearly half a second faster than Lima or Gomes, their 2019 performances could certainly predict an even faster performance in the Gwangju final.

The 2017 top three may be hard to break-up, but there are many dominant breaststrokers that are more than capable of accomplishing this feat. One of them is Italian record-holder Fabio Scozzoli, who is arguably Europe’s second-best sprint breaststroker. In the 2017 final, Scozzoli finished in sixth with a national record time of 26.91. However, at the 2018 European Championships, Scozzoli was runner-up behind Peaty in the final with yet another national record of 26.79.

His current national record was set at the 2018 Italian Spring Nationals where he put up a 26.73, making him the 7th-fastest performer ever in the event. This season, Scozzoli swam a world #4 time of 26.82. But, with his consistent improvements in the event since the 2017 final, who knows what Scozzoli could put up this time.

Stepping up to the sprint breaststroke scene more recently is 19-year-old South African Michael Houlie. At the 2019 World University Games, Houlie set the 50 breast Universiade record not once, but twice in the same day. Houlie first broke it in prelims with a 26.98 and later followed up in semi-finals with a 26.82, shaving 0.16s off his morning swim. With the final still yet to be swum, Houlie could easily pop another quick swim and become a threat to the veterans.

Speaking of up-and-comers, 20-year-olds Nicolo Martinenghi (Italy) and Michael Andrew (USA) will compete against each other again for the first time since the 2017 World Junior final in Indianapolis. Martinenghi won the world junior final in 2017 while Andrew got shut out to take bronze with an Italian 1-2 finish. Earlier at the 2017 senior Worlds meet, Martinenghi just missed the final with a 9th place finishing time of 27.01. While both swimmers are the national record-holders in their country, Martinenghi holds the world junior record of 26.97 back when he was 18.

However, Martinenghi did face a small set-back when he faced a pubic bone fracture in April 2018. A few months after that, Andrew went on to win 4 national titles, including setting 50 breast national record at 26.84. In June 2019, Martinenghi returned to the pool to set a new lifetime best of 26.85, just 0.01s off Andrew’s LTB. With the newcomers and veterans to clash, Martinenghi and Andrew are in the right shape to take on the challenge.

Returning from the 2017 final is Russian Kirill Prigoda, who placed 7th in the final. Later at the 2018 European Championships, Prigoda placed 4th in the final between top 2 finishers Peaty and Scozzoli. While Prigoda swam a world #15 time of 27.17 this season, his lifetime best of 26.85 puts him at top 8 contention alongside Martinenghi and Andrew. 2015 World finalist Caba Siladi of Serbia swam a lifetime best this season with a 26.83, putting him 0.02s ahead of Andrew’s own American record. Siladi, now 29 years old, now has an opportunity to re-appear in the top 8 this year.

Darkhorse: Asian Games champion Yashurio Koseki swam a 27.01 this season in the 50 breast. With his sub-27 lifetime best of 26.94 ranking 11th behind the aforementioned swimmers, his 2017 silver in the 200 breast proves that he is more than capable of amping up his sprint breaststroke.

How good are Lima and Gomes starts ? If they do what CVD did at commonwealth games and put him under pressure then there’s a slight chance, but Peaty on top form should be three peat on 50brs.

Don’t see a chance of anyone beating an in-form Peaty without half-a-dozen kicks off the start.

Lima and Gomes do more than half a dozen!

I’ve never noticed it with them, so I’m not going to agree with you there. That said, Adam Peaty does seem a bit bemused by the way people out-start him so dominantly internationally. He has one of the better starts in Britain, better than Murdoch and certainly a lot better than Wilby. His entry angle can be dodgy, but he reacts well, propels well and actually has decent pullouts. Even most of our juniors were giving the field half a bodylength off the start in breastroke events at Euro Juniors – Van Der Merwe would have gone 1.06mid with a start like the rest of the field. Either British coaches are missing a trick, or everybody else is doing *something*.

Everyone else is doing something

Wish they’d find a way to crack down on this.

Those boys normally fly kick the whole way down the length! And they know it

Peaty’s long course breaststroke power levels are just too much. I would love to see MA get on that podium even though he’ll likely get fourth.

The Brazilians will be wayyyy faster than this

Lima will be faster 26,2 I expect and will sell the gold hard to peaty

Gomes will beat Lima
Gomes is much more consistent as well. Lima went 26.3 and 2 days later was 27.0

26.3 in a suspiciously fast day of racing. Everydody in 50s was at least .2 or .3 faster than the rest of Mare Nostrum. Agree RE Gomes; Much prefer him to Lima.

This is a pretty fair assessment. I would swap positions 4 and 5.

And his start/pullout is much improved!

Underwater cameras for DQ’s could be a curve ball to this (and a few other events)….

What’s the deal with Michael Andrew being #5 when he has the worst SB (and second worst PB) and doesn’t really benefit from taper?