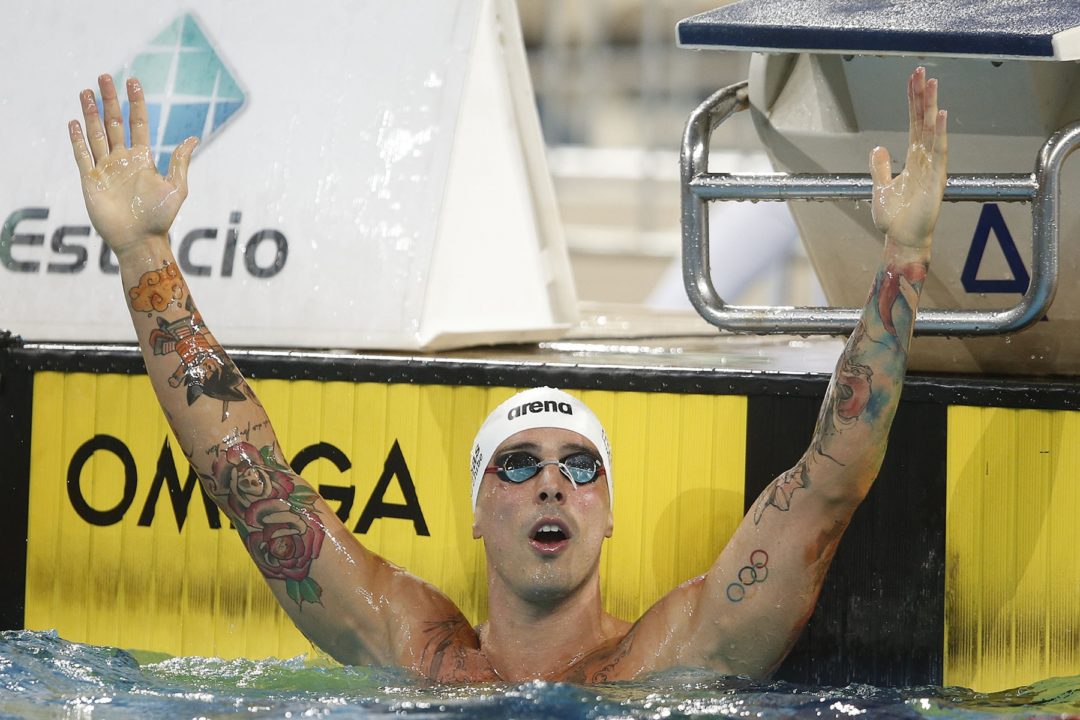 Fratus just threw down a world-leading 21.47 at the 2019 Brazil Trophy in his second competition since shoulder surgery in September, while Geer is the defending champion from last year. Archive photo via Satiro Sodré/SSPress/CBDA

Jacob Miller of Roanoke, Virginia has announced his commitment to the NAIA’s Milligan University for the fall of 2022, joining a large class of 2026.

Distance freestyler AJ Adams of Castle Rock, Colorado has announced her verbal commitment to swim for Pepperdine University next year.

General manager Jason Lezak (above) has his Cali Condors back in the ISL grand finale for the 3rd-straight season. The Condors are the defending league champions.

The annual TYR Derby Pro Swim Meet and accompanying events will run this weekend in Louisville. In addition to the meet on Friday night, there will be a drowning prevention clinic this Thursday afternoon, while world record holder and 12-time Olympic medalist Ryan Lochte will host his own clinic on Saturday afternoon. The meet and clinics are put on by the University of Louisville swim & dive program and is held to raise money to benefit Sigma Gamma Rho. Sigma Gamma Rho is committed to diversity, inclusion, and to the increase the swim participation and decrease drowning rates in our community. The meet also aims to bring world-class sprinters together for an exciting sprint meet, shoot-out style.

Eight women and eight men will square off in a 50 free long course. The field will get smaller through three rounds until a winner is crowned. Here’s a full breakdown of the rounds:

On the women’s side, defending TYR Derby champion Margo Geer is slightly favored here, though the field includes veteran sprinter Madison Kennedy and several Olympians. Kennedy was 24.88 at this meet last year in an early round, but fell in the final to Geer’s 24.91. In that final round last year, Lia Neal was third and Farida Osman fourth, so the top four all return. The biggest challenger is Mallory Comerford — she’s back from racing at the Brazil Trophy last week, where she went 24.89, just .09 off of her lifetime best from the 2018 Pan Pac Championships.

The dark horse here is Amy Bilquist, who just wrapped up her NCAA career with Cal. Battling through injuries this past season that kept her from racing most of the first semester, Bilquist went 21.52 in the 50 and 47.42 in the 100 in yards at NCAAs to set a personal best in the 50 and take 6th in both events overall. She was also 47.01 in the 100 at Pac-12s. She hasn’t made much noise in LCM since 2015, when she hit a 25.03 at age 17, and her best from 2018 came at the Santa Clara PSS (25.46), while she went a tick slower at Nationals. This is her post-college debut, and we could see something big if she’s in the same form as she was at NCAAs.

Bruno Fratus has to be the favorite here. Michael Andrew, the defending champion, isn’t here this weekend, but it probably wouldn’t have mattered even if he was. Fratus had shoulder surgery in September of 2018, the second shoulder surgery of his career after having his first procedure in 2013. In just his second meet post-surgery at the Brazil Trophy, though, Fratus thundered to a world-leading 21.47 in the event last week, just two-tenths shy of his lifetime best 21.27. He was 2nd to Andrew, 21.87 to 21.84, last year, in this meet.

The field doesn’t include Caeleb Dressel or Andrew, the top two Americans in the event this season, but there is a strong group of recent college graduates who are still among the best of the American sprinters. Ryan Held, who is now training with the Indiana University pro group, had a great meet at the Richmond PSS, including a win in the 100 free (48.70). Team Elite’s Michael Chadwick had a strong meet in Richmond, too, and he’s the fourth-ranked American in the world this season with his 21.96 from that meet. Zach Apple is the third American sprinter here, and while he’s stronger in the 100 like Held, he could be a factor here, too. Held and Apple have both been 22-low in their careers, and both are teammates at IU right now.

The top challenger to Fratus is not an American, though. Japan’s Shinri Shioura ranks ahead of any American (including Dressel) in this race in the world rankings with his 21.67 from the Japan Swim 2019 meet earlier in April. Last year, Shioura made the final round of this meet but ran out of fuel with a 22.62 after going 21.88 in the preliminary round and a 22.24 in the semifinals.

There will be a livestream for this event, with details to be announced tonight.

Will be interesting to see what Schoeman will do!