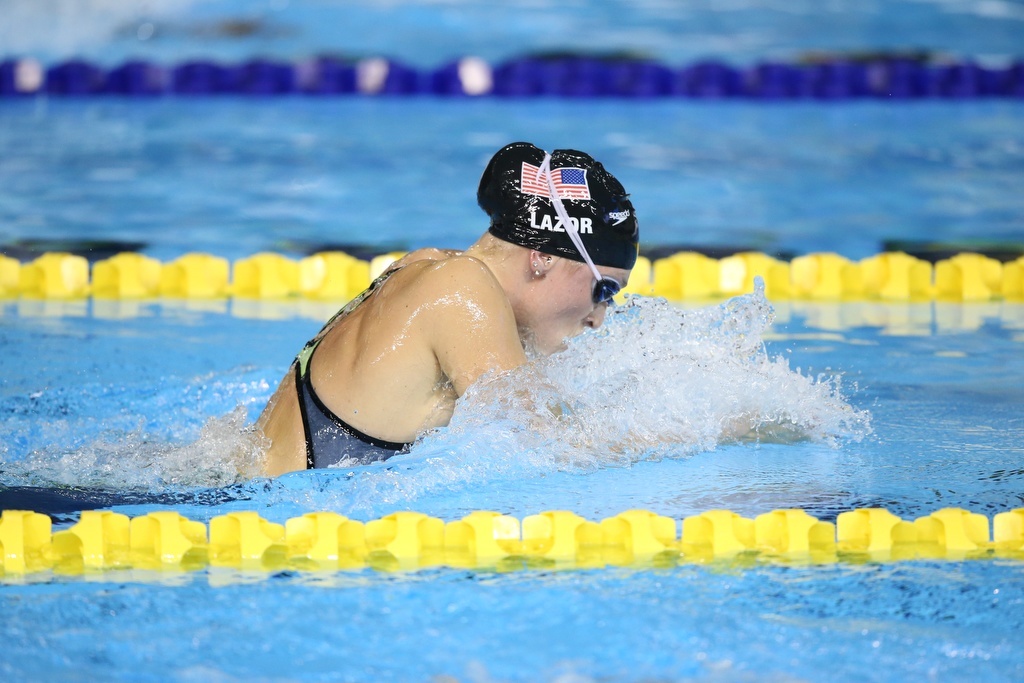 Tonight's finals will feature the 100 free, 200 breast, and 100 back, as well as the mixed 4x100 medley relay. Stock photo via Chris Tanouye

Meghan Small comes in as the top seed by a second and a half in the women’s 200 IM on the final night of the 2019 Pan Ams in Lima, Peru.

2:15.48 undercuts the Peru National Record, which was held by DeBever at 2:15.53 from April of this year. Here is a split comparison between the two races:

Tonight’s finals will feature the 100 free, 200 breast, and 100 back, as well as the mixed 4×100 medley relay. American Margo Geer was the top qualifier in the women’s 100 free this morning. Geer was 54.6 this morning, after anchoring the mixed 4×100 free relay to victroy in 53.0 last night. Judging by her split last night, we could see her take down the Championship Record of 53.83. Michael Chadwick (USA) led a tight field in the men’s 100 free this morning. Chadwick swam a 48.94, which was faster than his lead-off split on last night’s relay. Nathan Adrian (USA) was 6th this morning in 49.59. We can expect faster from Adrian tonight, who saw split in the low 47s a few times off relay starts at the World Champs a few weeks ago.

Annie Lazor has swum the 2nd fastest 200 breast in the world this year, 2:20.77, which also stands as her best time. She was 2:26 this morning to take the top seed for tonight. Americans Nic Fink and Will Licon are the top two seeds for finals of the men’s 200 breast. Both swam 2:10 this morning, with Fink’s best time this year coming in at 2:09.93, and Licon’s at 2:08.88. American teen Phoebe Bacon will be looking for Gold in the women’s 100 back after swimming the only sub-1:00 time this morning. She was just .05 seconds off the Championship Record this morning. Daniel Carr (USA) was the only sub-54 second men’s 100 backstroker this morning, with Brazilian Guilherme Guido posting the 2nd fastest time of the morning after winning the first heat in 54.52.

Margo Geer led the race from start to finish, flipping at the 50 meter mark in 25.87. which was nearly 1 second faster than anyone else in the field. Geer charged into the finish in 54.17, which was good for Gold by nearly 1 second. Geer has been this as fast as 54.09 this year.

With Geer out in front early, the remainder of the field stayed very tight for the first 50 meters. Canada’s Alexia Zevnik and Brazil’s Larissa Martins Oliveira broke away from the pack at around the 75 meter mark, sprinting in for 2nd and 3rd respectively. There was a gap bewtween those two and 4th place finisher, Lia Neal (USA), who bettered her prelims swim with a 55.62.

American Michael Chadwick split .01 seconds behind Venezuela’s Cristian Quintero, 23.27 (Chadwick) to 23.26 (Quintero). Chadwick battled it home a little quicker, however, touching the wall in 48.88 to Quintero’s 48.94.

Not one, but two swimmers were under the Pan American Games Record, with both Annie Lazor and Bethany Galat of the USA crushing the previous record of 2:24.38. The Americans picked up a 1-2 finish, with Galat touching the wall over 3.5 seconds ahead of bronze medalist Julia Sebastian of Argentina. Sebastian led the field at the 100 mark, turning in 1:09.37 to Lazor’s 1:09.50 and Galat’s 1:09.53.

Will Licon and American teammate Nic Fink took control of the race early on, and pushed each other to the end, each touching well under the Pan American Games Record of 2:09.82. Fink was out just a little faster than Licon, turning at the first 50 in 28.93 to Licon’s 29.14. Licon then took a slight lead over Fink, which he held for the remainder of the race.

Both Licon and Fink swam lifetime bests. Licon bettered his previous mark of 2:08.14, which he had swum all the way back at the 2016 US Olympic Trials. His 2:07.62 now ranks him as the 4th fastest American all-time in the 200 breast, and the fastest American this year, dipping under Andrew Wilson’s 2:07.77 from the first stop of the World Cup. Fink was under his previous best of 2:08.56, which he swam at 2017 Worlds. Fink is now 6th all-time for Americans.

Mexico’s Miguel de Lara took Bronze by nearly 1 second, with Mexican teammate Mauro Castillo Luna coming in 4th with a 2:12.21. With his swim, de Lara broke his own Mexican Record, which he held at 2:11.77 from last year’s CAC Games.

16-year-old American Phoebe Bacon controlled the race from the start, taking the event in a time of 59.61. The defending champion in the event was this year’s Bronze medalist, Etiene Medeiros (Brazil), who clocked a 1:00.67 tonight. Bacon was off her personal best of 59.12, which she swam at US Nationals last Summer, but she did swim a season best. Her prelims swim of 59.66 was her fastest of the season up until tonight’s final. With that Gold medal, the Americans have picked up their 4th Gold of the night.

Guilherme Guido of Brazil was out really quick, flipping in 25.39 at the 50 mark, half a second ahead of USA’s Daniel Carr (25.86). Carr pulled up to Guido consistently over the course of the entire 50, pulling compelety even with him just under the flags. Carr ultimately got his hand on the wall first by just .04 seconds, splitting 27.64 on the 2nd 50 to Guido’s 28.15. Guido’s personal best came from the World Champs a few weeks ago, where he swam a 52.95. Carr broke 54 seconds for the first time this morning, and dropped his best by again almost a full half second tonight.

Dylan Carter, representing Trinidad and Tabago, took the Bronze medal with a 54.42. Carter has a personal best of 54.03 from the World Champs a few weeks ago.

Argentine star Delfina Pignatiello broke away from the field very early on, getting herself some clean water to work with as she went on to win the event by nearly 5 seconds. Pignatiello split high-31s and low-32s each 50 on her way to taking Gold. She wasn’t too far off her personal best of 8:24.33.

Mariah Denigan of the USA established herself as the 2nd place swimmer behind Pignatiello at around the 300 meter mark, and held on to her lead to take 2nd. Vivian Eichelberger (Brazil) ran down Chile’s Kristel Kobrich, who was in 3rd up until the 700 meter mark. Eichelberger raced home in 1:03.98 on the last 100. Kobrich ultimately finished 4th in 8:37.22.

Brazi’s Miguel Leite took the early lead and held it until around the 700 meter mark. Andrew Abruzzo of the USA hovered between 2nd and 3rd for the majority of the race, turining it on in the last 150 meters to take a comfortable lead by the time he touched the wall in 7:54.70. With that swim, Abruzzo became the Pan American Games Record holder, as this was the first time men have competed in the 800 free at an edition of these Games. The addition of the the men’s 800 free and women’s 1500 free came because the Olympics will also be featuring those races for the first time next Summer in Tokyo.

The American team of Phoebe Bacon, Cody Miller, Tom Shields, and Margo Geer touched the wall first by a huge margin, but were disqualified. With the USA out, Brazil took Gold, winning in 3:48.61. Brazil led the race from the beginning, with Guilherme Guido leading off in 54.68, the fastest in the field. Joao Gomes then split 59.32 on the breast leg to give the Brazilians a big lead. Gomes’ time was the fastest in the field with the exception of Cody Miller, who split 58.87 on the disqualifed American relay. Giovanna Tomanik was next in Brazil, posting a 59.33, and Larissa Oliveiro anchored in 55.28.

Team Canada was running Brazil down quickly on the back half of the race, but the lead Brazil had built proved to be too much. Javier Acedvedo led off in 55.03, followed by James Dergousoff in 1:01.71. At the 200 mark, Brazil was ahead of Canada by 2.74 seconds. Franci Hanus dove in for Canada’s fly leg, and split 58.71, knocking .62 seconds off Brazil’s lead. Alexia Zevnik anchored for Canada, splitting 54.52 to cut another .76 seconds into Brazil’s lead.

Argentina used their two female swimmers first, a pretty unconventional method in mixed relays. Eliana Berrino led off in 1:02.61, with Julia Sebastian splitting 1:07.55 on the breast leg. Santiago Grassi then split a 51.65 on the fly leg, which was faster than he swam individually in the 100 fly. Federico Grabich then brought Team Argentina home in 48.72.

Who’s ready for some PAN FLUUUUTE?!?!

Pan flute is to Pan Ams annoyance as Rowdy is to swim fans on commentary.

I have no problems with Mr. Gaines.

POLL – Really curious what the consensus is
https://linkto.run/p/JVZDMSE9

The shallow minded swimming community always says whoever’s coaching the current best swimmer is the best coach so Bowman for like 12 years and then Troy since, with some smattering of man crushes on whoever happens to be coaching ledecky at any given time (Yuri, gemmel Meehan).

I think there are about a dozen “best coaches” and within that group, it is all about style and who works best for each swimmer

THE best coach of ALL TIME is Jon urbanchek

Has to be Peter Andrews. lol

http://yoursports.stream/live?v=espnu
Free Streaming link for those of you without ESPN or in foreign countries