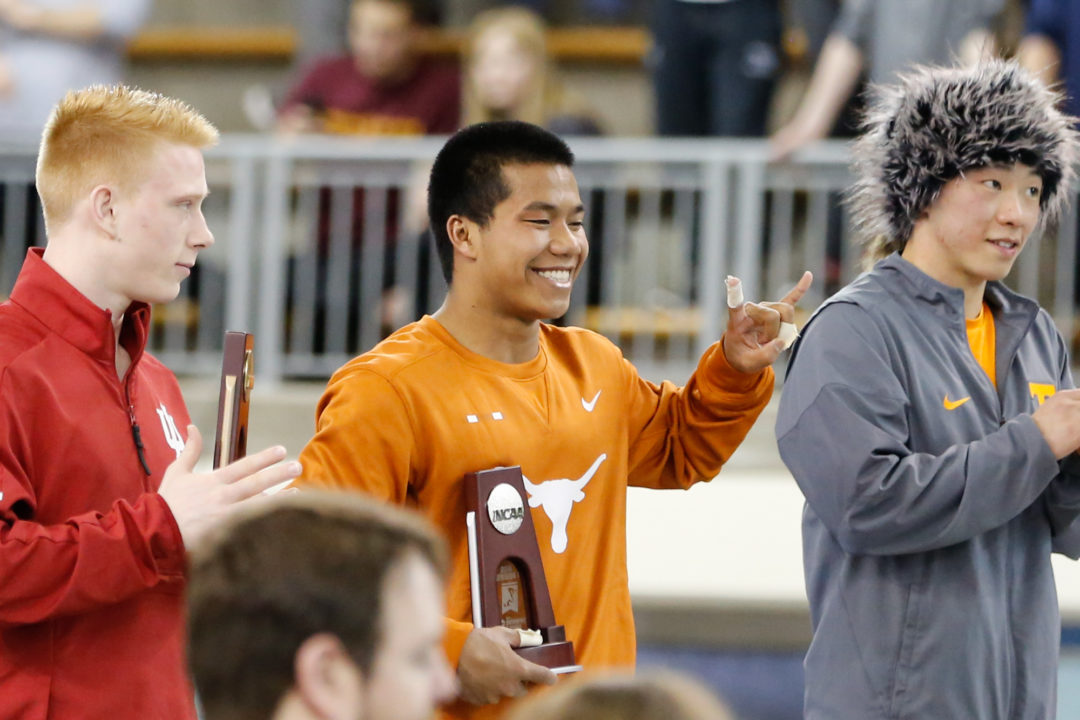 Texas will once again have two divers in the A final, while Indiana scored one and missed one potential scorer on a missed last dive. Archive photo via Tim Binning/TheSwimPictures.com

Texas will once again have two divers in the A final, while Indiana scored one and missed one potential scorer on a missed last dive.

Texas got Jordan Windle and Grayson Campbell back into the A final – they were 5th and 7th last year. Windle qualified third this morning and Campbell, diving last of the 51 divers, slid into 6th with a strong final few dives.

Indiana got Andrew Capobianco back into the A final as the second qualifier. He was 8th last year. But IU missed a huge opportunity in James Connor. Last year’s 6th-place finisher was running fourth until his final dive, when he overrotated and scored mostly twos, dropping all the way out of the top 16. He finished 19th and will not score tonight.

Tennessee put two into the A final, led by Colin Zeng, who dominated prelims with 432.20 points – more than 25 ahead of the field. It looks like the sophomores Windle and Capobianco will be the top threats to Zeng in tonight’s A final.

Miami’s Briadam Herrera should also be in the mix. He was 4th, and has previously been an NCAA runner-up, although he redshirted last year.

In terms of team points, Texas is curently projected to score 29 points, if Windle and Campbell hold their spots. Indiana would score 17 if Capobianco holds second.

Purdue’s Greg Duncan won the B final, scoring 398.20 to best the other seven divers by 18 points. That 9th-place finish is an improvement on the 11th he took as a freshman last year with UNC before transferring to Purdue.

If all prelims places hold in the A final, here’s what each team would score, based on results of the B final:

The Texas divers have hit their taper.

Thank you James Connor, it was a joy watching you dive and represent IU.