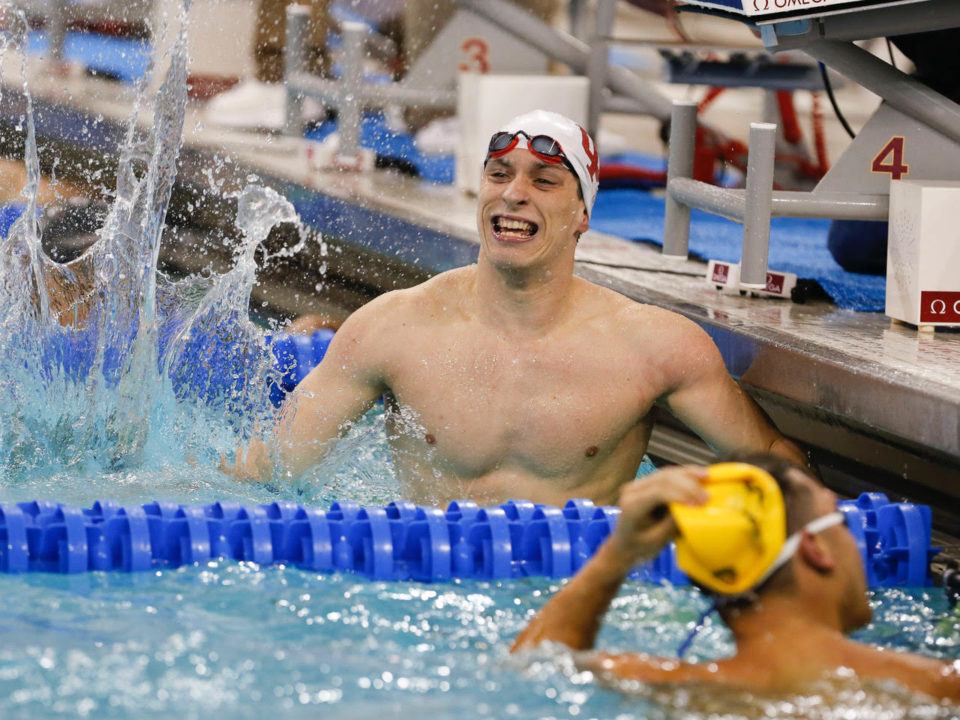 Indiana looks just as strong as last year in this event, and they will be gunning for their 2nd-straight win. Current photo via Tim Binning/TheSwimPictures.com

Defending champions Indiana top the psych sheet, just as they did last year heading into the meet. They’ve been pretty consistent, in that they were seeded last year at 3:01.30 before winning in 3:01.07, and they come in this year with a time of 3:01.63 from Big Tens. They bring back three of their four legs in Gabriel Fantoni, Ian Finnerty, and Vini Lanza, who split 45.59, 50.33, and 44.53, respectively at NCAAs last year. They lost Blake Pieroni and his 40.62 anchor leg, but bring in transfer Zach Apple, who owns a 41.36 lifetime best, and should come close to matching Pieroni’s effort. By all appearances, this is their race to lose.

Texas should be back in the thick of things after taking a big step backward last year. After winning this title three-straight times, setting a new NCAA and US Open record each time, the Longhorns’ slipped to the B-final. The Longhorns took care of their most glaring issue, thanks to freshman breaststroker Charlie Scheinfeld. The rookie split 50.7 on this relay at the Texas Invite, and even if he can’t quite match that, he should be substantially faster than the 52-high split they got from Sam Stewart last year. Scheinfeld is the only lock on this relay, as Texas has a few different options. John Shebat led off in 2016 and 2017, but Austin Katz took over in finals last year after Shebat could only muster a 45.60. Both men are capable of going under 45, but Shebat may end up swimming fly. He split 45.0 on that leg at Big 12s, and with a full taper, should probably be able to go 44-mid. There’s also an option of going with Tate Jackson on fly, who has a lifetime best of 45.78, and someone like Townley Haas on free, but going with Shebat on fly and Jackson on free is probably the faster combination.

NC State is another team with lots of options, despite losing sprint star Ryan Held to graduation. At ACCs, the Wolfpack went with a lineup of Coleman Stewart (44.36), Daniel Graber (51.89), Nyls Korstanje (44.94), and Giovanni Izzo (42.07) for a time of 3:03.26. But they could also use Andreas Vazaois (44.81 lifetime best) or Justin Ress on backstroke and shift Stewart to fly (44.38 split at NCAA prelims last year). They’ve also got Jacob Molacek available on breast (52.32 split at 2018 NCAAs finals). Izzo doesn’t have a NCAA invite, although he could be brought along as a relay-only swimmer, but they’ve also got 41-second freestylers Molacek or Ress available. Follow all that? We think we did.

Mizzou looked spectacular at SECs, and come in with the 3rd-fastest time this season, a 3:03.37. The big question is whether not they can hold their taper and match their times again at NCAAs. Daniel Hein finally broke the 46-second mark with a 45.72 leadoff, Caleb Hicks took over breast duties and split 51.51, while freshman Danny Kovac split 45.23. The big leg for the Tigers, though was Mikel Schreuders, who anchored in a smoking 40.91, making him one of a handful of men to split under 41.

Rounding out the 3:03 teams are the Louisville Cardinals. They return three of their four legs from last year, and like Indiana, there’s pretty much no guessing as to their lineup. At ACCs, Nick Albiero led off in 45.55, although he went 44.88 individually, Evgenii Somov, the only new addition to this lineup, split 51.90 on breast, Zach Harting got under the 45 barrier with a 44.80 fly split, and Andrej Barna anchored in 41.50. Last year, Louisville impressed at ACCs and still managed to drop time at NCAAs, so they should be a safe bet to at least hold those times next week.

Cal took 2nd each of the three years that Texas won, but the Ryan Murphy-less Bears faded just a bit last year, taking 4th in 3:02.83. They lose Connor Hoppe (50.87) and Matthew Josa (44.71) from the middle two legs, but that doesn’t mean they’ll take a hit in terms of overall time. They still have Daniel Carr (45.50 leadoff, but who could be faster this year), and Ryan Hoffer, who anchored in 41.46 but could also swim fly. Freshman Reece Whitley split 51.91 at Pac 12s, but went 51.38 individually. Andrew Seliskar could swim either breast or fly (44.80 at Pac-12s), and if the Bears leave off Seliskar off this relay and put Hoffer on fly, they still have Michael Jensen or Pawel Sendyk on free.

Despite losing three of their four legs, USC actually is coming in with a faster seed time than they had last year, when they ultimately finished 3rd in 3:01.83. They took their biggest hit on backstroke, where Patrick Mulcare will be pressed to meet the 45.0 that Robert Glinta and Ralf Tribuntsov hit last year. But Carsten Vissering is one of the best breaststrokers in the NCAA, and is seemingly capable of splitting sub-51 at will. They lost Dylan Carter (44.71) and Santo Condorelli (41.21) on the back half, but Alex Valente split 45.30 at Pac-12s, and Nikola Miljenic went 41.66, so USC isn’t looking quite as rough as would’ve been expected.

Alabama has top eight times in four relays this year, including this one. Their seed time of 3:04.17 comes from SECs, where they finished 2nd behind Mizzou. They had to shift Zane Waddell from fly to back this year, and he responded by dropping a 20.22 split in the 200 medley relay, and a sub-45 victory in the individual 100 back at SECs. Laurent Bams is good for right around 52 on breast, and Robert Howard‘s ability to anchor in sub-41 means that Knox Auerbach‘s 46.2 on fly is enough to keep this team in the running for the A-final.

Another three teams are clustered together between 3:04.86 and 3:04.97. Texas A&M took 3rd at SECs, although, it’s not clear whether or not they have much room left for improvement. Michigan is roughly two seconds faster than they were coming into NCAAs last year, and they should at least score after finishing 19th last year. Florida’s relays look much more solid than expected, despite turning over their team, but they’ll still need to knock a couple seconds off their seed time to make the A-final.

Looking further down the psych sheet, we have two teams who made the A-final last year, but seem to long shots to make it this year. Georgia returns three of four legs from its 8th-place finish this year, but will need a freestyler who can get under 43 on a relay start if they want to make the top eight again. Likewise, Stanford looked a bit rough at Pac-12s, and is only seeded with a 3:06.89. Still, both schools dropped big times off of seed last season to make the A-final, so neither can be completely counted out.

Virginia, Tennessee, and Minnesota are all seeded at 3:05-low, and any could challenge for a spot in the A-final, especially if any of the top eight-seeded teams can’t match their times.

Vissering dropping a 49 on this relay

Ah, but consider this:

I think all these relays are going to be very competitive, but each team has question marks in this 400 MR. Very hard to cleanly project the winner.

11
0
Reply
JP input is too short
Reply to  RollTide

Texas definitely has the ability to win this. I guess I was hedging my bets a bit by putting them 4th. If Scheinfeld can simply match his times from the Texas Invite, and if Jackson can do what we know he’s capable of, it’s going to be a very close race. I think we’re a bit uncertain on what to expect from Jackson after he only had a few swims at Big 12s.

He’s a bit of an unknown for sure.

I can’t think of a reason to count Texas out of winning any relay. Legit contender in every one… IF everyone they choose to put in performs up to their ability… nothing crazy… just doing what they’ve already shown they’re capable of.

IU’s best flat start times add up to about 2:59.4. They have to be the favorite, but its NCAAs and you gotta get it done.

Sources tell me Knox Auerbach has been doing a lot of trampoline work at the Don Gambril Olympic Pool at the Alabama Aquatic Center to prep for this race. The idea is for him to get even more height and distance off of his rolling start; ideally, he’ll hit the opposite wall for his first turn as he finally lands in the water. We all know air has less resistance than water; could become a really fun element to the race if he pulls it off.

28
0
Reply
googoodoll
Reply to  He Gets It Done Again

You say Apple-infused Indiana, I say Indiana-infused Apple. Regardless they are a very capable team and have all 21 events covered! I am hoping for the most competitive meet ever with the four great programs all in the fight.

3
-2
Reply
The Wolf of Raleigh

NC State will the win in this one.

They have the depth to have a completely different 4 swimmers from prelims to finals. Those fresh swimmers will make the difference over the long haul of the meet.

2
-24
Reply
Swammer
Reply to  The Wolf of Raleigh

I wouldn’t say they’re going to win, but the race between NC State and Indiana is going to be closer than people think. If they get the lineup right, who knows? I also think Texas beats Cal. Texas has the depth on free and back. Shebat also has some good underwaters so I wouldn’t worry about him on fly. Cal just has too many YOUNG superstars. I would bet on the experience of Texas over the speed of Cal.

1
0
Reply
JP input is too short
Reply to  Swammer

I feel like the Texas and Cal relays could very well only have one cumulative year of age between them… Texas’s relay could go So/Fr/Sr/Sr and Cal’s So/Fr/Sr/Jr… Now if Texas does go Shebat (Sr)/Schienfeld (Fr)/Jackson (Sr)/Haas (Sr) you will have a point!

0
-1
Reply
IU Swammer
Reply to  The Wolf of Raleigh

I know I’m mixing correlation with causation, but given how your other predictions have turned out, your comment makes me more confident in IU.

Cal or Indiana could go 4 different too, really, and be more viable than NC State.

NC State’s option there would be something like Vazaios/Molacek/Hensley/McLaughlin AM and Stewart/Graber/Kortsanje/Ress PM.

But I bet none of them do that full swap-out.

2
0
Reply
Swammer
Reply to  JP input is too short

NC State could also do Vazaios, Graber, Stewart, Ress. It just depends if they think Stewart will be better on back or fly.

Bold prediction: Ncsu will swim Molacek on this relay. My bet is he goes all 5.

What does that change exactly? They’re still up there competing at the top end of the big heat.