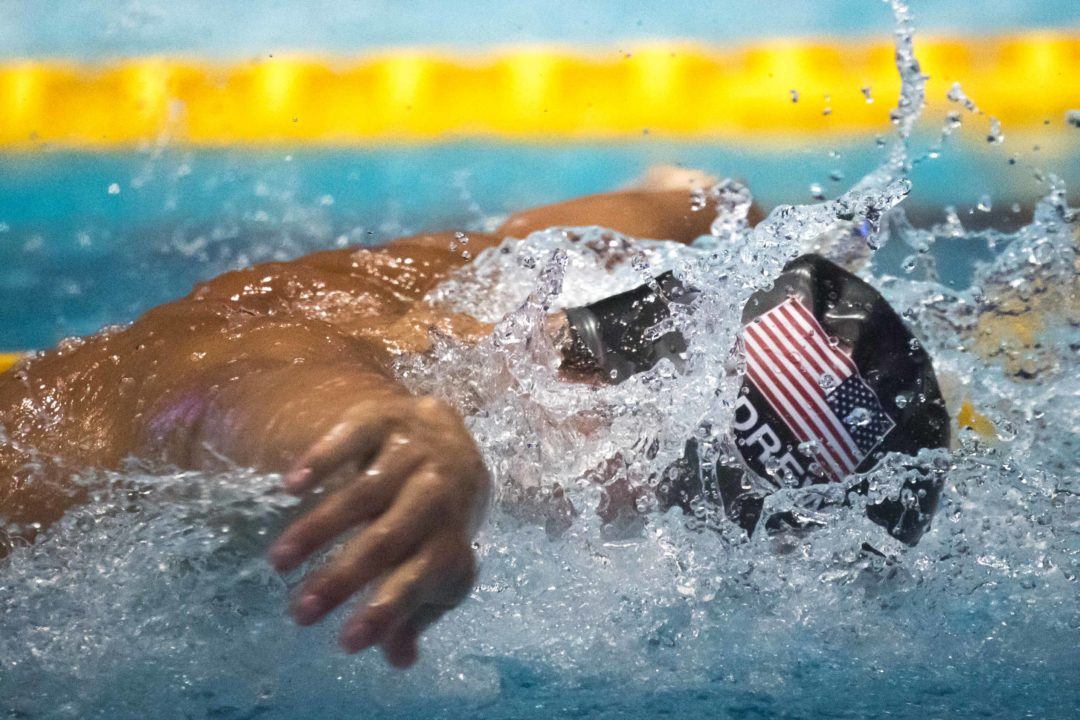 There's a backstroker shortage in Des Moines: two teams will struggle to fill complete lineups this month, while several captains will face tough decisions about what to do with versatile talents like Michael Andrew (pictured) or Caeleb Dressel. Archive photo via Tim Binning/TheSwimPictures.com

Being a professional athlete means professionally recovering in between sessions at a swim meet. Olivia Smoliga and Natalie Hinds’ solution? ASMR Videos

Michael Andrew brought in a prize money haul in Des Moines, winning five events and earning a big relay bonus to lead all money earners on the 2019 Pro Swim Series.

After staying in Michigan to finish her masters and train, Ali DeLoof has made the move out to the Team Elite pro group in San Diego to focus full time on swimming. What has the transition been like?

Though overall entry numbers are way down from last year, there’s still a fair amount of star power in Des Moines. That said, active swimmer shortages are going to sting at least one team this week, and the Pro Swim Series’ decision to reward top FINA point swims (as opposed to running series points like in previous years) is adding another wrinkle: top athletes limiting the scope of their event entries. That’s going to put the captains in more precarious positions when choosing their starting six.

This is what we were worried about: with the Pro Swim Series moving eastward – and into more out-of-the-way cities from a travel perspective – the fear was that the large group of California-based pros wouldn’t travel as much as they did in past years. That’s going to burn DiRado this month, as Cali talents Murphy and Manuel are absent in Des Moines. Nathan Adrian’s surgery for testicular cancer also leaves this team without the swimmer that has been the most ‘sure thing’ of anyone on the Pro Swim Series the last five years.

DiRado has just five swimmers active, so she’s going to leave one spot open regardless. That’ll be backstroke, because none of her active swimmers are entered in backstroke events.

The strategic choice for DiRado is whether to try to maximize her number of scorers (working to get all five active in some form), or taking her losses and trying to put her top athletes in the best position to score big, perhaps crowding out her other active swimmers in the process.

We’re taking the former approach. Chase Kalisz is once again skipping the 400 IM, keeping him from being the 20-point lock he was most of last year. We’ll start him at butterfly, figuring that he’s a pretty good in-season swimmer and could win the 200 and get at least 10 points. That frees up the IMs for Bethany Galat, who is entered in both and should score pretty well.

Lia Neal is the only choice at freestyle, and that leaves DiRado’s two breaststrokers in the breast and flex spots. The other option is to try to maximize points from Kalisz and Galat – Kalisz could take the IM spot and likely score 10 with a 200 IM win. Galat could move to the breaststrokes, where she’s seeded better than the IMs. But then DiRado would have to start Fink at flex and leave Miller off her starting lineup. Miller is coming off of injury and didn’t swim great in his only showing this year (a SCY meet in December), so it’s certainly possible DiRado won’t bank on points from him, instead maximizing points from her four other swimmers.

Jaeger is going to run into several of the same issues as DiRado. His star IMer, Melanie Margalis, is also swimming only the 200, so her points as an IMer get capped at 10 instead of 20. Jaeger also has no backstroker and will have to leave that spot empty, unless he wants to use Margalis, his only entered backstroker who is seeded 16th in the 100.

The breaststroke is a pretty straightforward choice between Annie Lazor and Andrew Wilson. Lazor swept the 100 and 200 in Knoxville; Wilson won the 100 but was 3rd in the 200 and 4th in the 50. Good drafting to Jaeger, who – at least in this early stage – seemed to pick the best of a tough-to-predict breaststroke field. We’ll take Lazor after her big Knoxville sweep, but Wilson has probably done enough to be the top flex play.

Margalis is the only IMer entered, and is a good bet to score big in the 200. Then comes the tricky part. No one knows what to expect from Caeleb Dressel, who is arguably the best swimmer on the planet, but also swims in a system that is notoriously brutal at mid-season. Dressel could win seven events or he could fail to crack the top 3 at all; neither would be entirely surprising. We’ll take his butterflys for two reasons: first, Jaeger has a ton of other freestylers and his only other flyer is Tom Shields, who would have scored only 8 points at best in Knoxville. Second, because Dressel’s butterfly races appeared a little more sharp than his freestyle races during the regular season last spring.

Wilimovsky seems the safest bet in freestyle; he’s got Zane Grothe in the distances with him, but not as deep a field as Deloof in the mid-sprints.

Everyone is thin on backstrokers this time around. If it weren’t for Kathleen Baker, Beisel would have no backstroke entries, either. And though Baker is a big name, she’s not the best start here, at least based on Knoxville results. Baker didn’t even swim the 200 back in Knoxville and finished 3rd in the 50 and 8th in the 100, scoring just 8 points for Beisel.

Still, she’s going to outscore the backstrokers from Jaeger and DiRado. And she’s Beisel’s only option. Jay Litherland is the only two-distance IMer on the active roster, and he’s a solid start.

Then, Beisel has three big, tough calls. The first is freestyle. She’s got Zane Grothe and Leah Smith, both of whom were studs on the tour last year and hold high seeds. But Smith has made a trend of entering these events only to scratch them. She did it multiple times last year, and did it again in Knoxville two months ago. Grothe is our starter and Smith our flex play, but only because we have a sneaking suspicion USA Swimming lets its captains replace swimmers who scratch the day of the meet.

Tough call #2: breaststroke. Kevin Cordes was pretty solid in Knoxville, taking 2nd in the 50 and 4th in the 100, though Beisel started him in the 200, where he scratched. The upside pick is Will Licon. Here’s some informed speculation: last year, the Texas pros appeared to rest or at least put some focus on the Atlanta Pro Swim Series in March. Perhaps that coincides with when the college swimmers are resting, and made it easier to build a cohesive training block between the two groups. Licon, Jack Conger and Andrew Wilson all went season-bests at this time last year. Conger and Wilson are now gone from Texas, but Licon could be in line for a big week. He went 1:00.8/2:09.4 at this time last year.

Tough call #3: the flex play/butterfly conundrum. Hali Flickinger is the very, very likely winner in the 200 fly. She won by four seconds in Knoxville. But if she starts at butterfly, her points are capped at 10, as she’s not entered in the 50 or 100. If she’s not the fly starter, she might even be a better flex play than Leah Smith. But the other flyers are iffy. Kendyl Stewart is only entered in the 50, capping her points with a lower max-point probability than Flickinger. Justin Wright is probably only a scorer in the 200. We’ll take Flickinger in the fly role, assuming Smith swims. If Smith isn’t making the trip (choosing to spend her money on entry fees for meets she doesn’t swim instead of plane tickets to those meets), then it’s a tough call between sliding Flickinger to flex with Wright/Stewart at fly, or throwing in someone like Blake Pieroni as the flex play.

IM is proving to be one of the tougher roles to fill so far this year, and Adams is lucky to have Gunnar Bentz, perhaps the best IM starter of the bunch this time around. She also has two great options at the position everyone has struggled to fill in Knoxville – I guess we know who’s hoarding all the backstrokers.

Olivia Smoliga won the 50 and was second in the 100 in Knoxville, and she’s proven to be a great in-season swimmer. That makes her the best play. Jacob Pebley is a strong flex option who is generally good in-season, but didn’t compete in Knoxville.

Adams has a ton of flexibility with the rest of her top talents. Michael Andrew could fit in a bunch of places, but is probably maximized as a flex play after winning the 50 free and 50 back in Knoxville with top-3 finishes in the 50 free and 50 fly to boot.

Kelsi Dahlia is the consensus best fly play on this tour. Margo Geer was second in both the 50 and 100 frees in Knoxville, and winner Simone Manuel is absent in Des Moines. That leaves Micah Sumrall for the breaststroke spot: she was 2nd in the 100 and 200 in Knoxville.

As a whole, Des Moines is shaping up to be another strong outing for the Adams Family, who already lead the series by 10 over DiRado. Adams has pretty good scorers at most of her spots, and is the only team with the maximum of 12 scoring opportunities. Helping matters is that DiRado is in big trouble on this leg, limited to only five starters and just 9 scoring opportunities.

Beisel is in last place after Knoxville, but she should surge this week – in fact, we’ve got her projected with the second-highest Des Moines score, behind only Adams. That does, though, depend on whether Leah Smith competes or not. Jaeger’s hopes probably ride on how fast Dressel is at this time of the year and whether Jaeger makes the right call on where to start him between fly, free and flex. We’ll wager that Adams will have a sizable lead after this weekend, with the other three bunched up fairly close. Jaeger is set up to take over second place, with Beisel also jumping past DiRado for third.