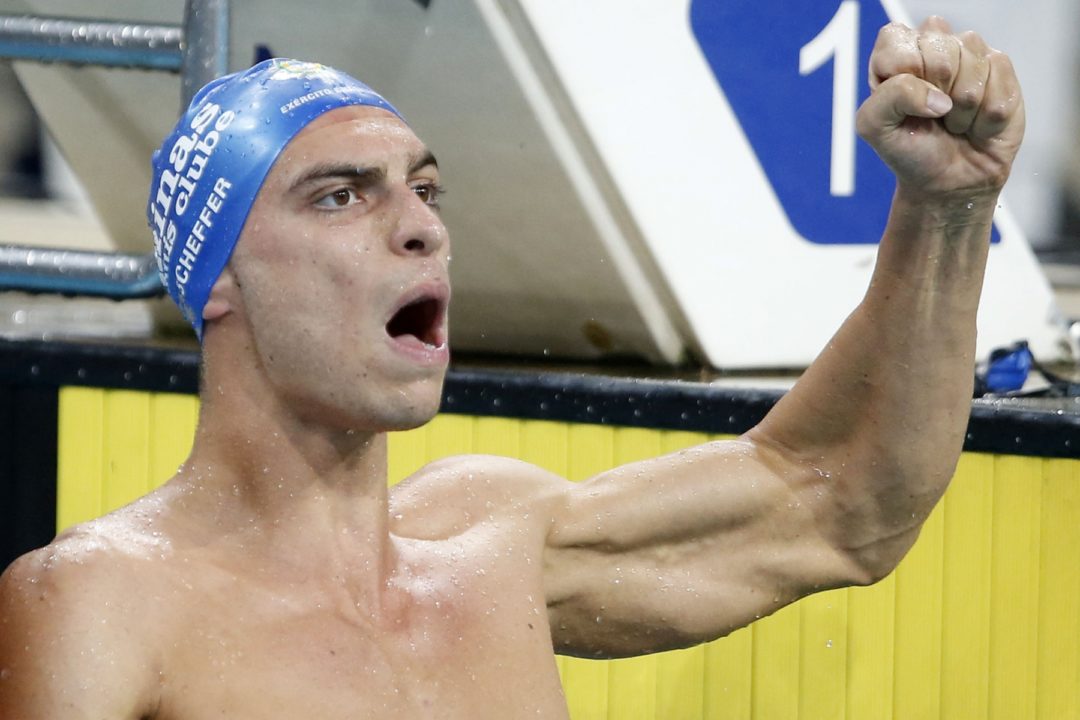 Minas' Scheffer shaved over a second off his own record, but Pinheiros battled from behind to take the overall team title. Current photo via Satiro Sodre/SS Press

The final day of the 2019 Brazil Trophy, Brazil’s national championships, saw a number of world top five swims and South American records. Pinheiros also showed off its sprint depth as it battled from behind to defend its overall team title.

Veteran Etiene Medeiros (SESI-SP), known primarily as a perennial world leader in the 50 back, nabbed a win and meet record in the 50 free. She went 24.53, the No. 7 time in the world this year. She recently said she’s focusing more on free training than on backstroke in an attempt to make the 4×100 free Olympic relay team. American Mallory Comerford, representing Minas for the week, took second place in 24.89. In third was defending champion Lorrane Ferreira, of Pinheiros, in 25.30.

Bruno Fratus (Minas) was the only man under :22 in both prelims and finals, ending the day as the world’s leader in this event. He went 21.47 Sunday night.

Pinheiros swimmers finished second through fifth, as well as seventh and eighth. Marcelo Chierighini took second place in 22.05; he set the South American textile 100 free record earlier (47.68) in the meet. In third place was Pedro Spajari in 22.07, in fourth was Gabriel Santos in 22.14, and in fifth was Luiz Borges (son of Brazilian great Gustavo) in 22.21. Pinheiros swimmers went 1, 2, 3, 4 in the 100 free, but with Breno Correia instead of Borges.

The team has a storied sprinting tradition as the former home of Cesar Cielo, current world record holder in the 50 and 100 free – Cielo cut ties with the team earlier this year and did not compete at the Brazil Trophy.

Defending champion Joao Gomes Jr. (Pinheiros) swam a world-leading 26.42 in prelims this morning in the men’s 50 breast, but finished third in finals in 26.80. His teammate Felipe Lima, who was 26.48 this morning, won the event in 26.50. Taking second was Unisanta’s Felipe Silva in 26.75.

Minas, armed with a number of international swimmers to boost points, built a lofty lead on defending champion Pinheiros early in the meet. Minas still led by nearly 200 points after day four, but Pinheiros had reeled them back to within 25 points after day five. Thanks in part to its sprint prowess on the men’s side, going 1-2-3-4 in the 100 free and 2-3-4-5-7-8 in the 50, and winning every relay, as well as the extra points for Sunday’s South American records in the 50 breast for both genders, Pinheiros came out on top in the end.

Minas’ Mallory Comerford, who broke the Brazil Trophy record in the 100 free, and Pinheiros’ Marcelo Chierighini, who broke the South American textile 100 free record, were given the female and male awards for performance of the meet, respectively. Comerford was the highest-scoring female swimmer of the meet, and Fernando Scheffer the highest-scoring male.

What were the splits on the medley relay? 3.32 is not bad