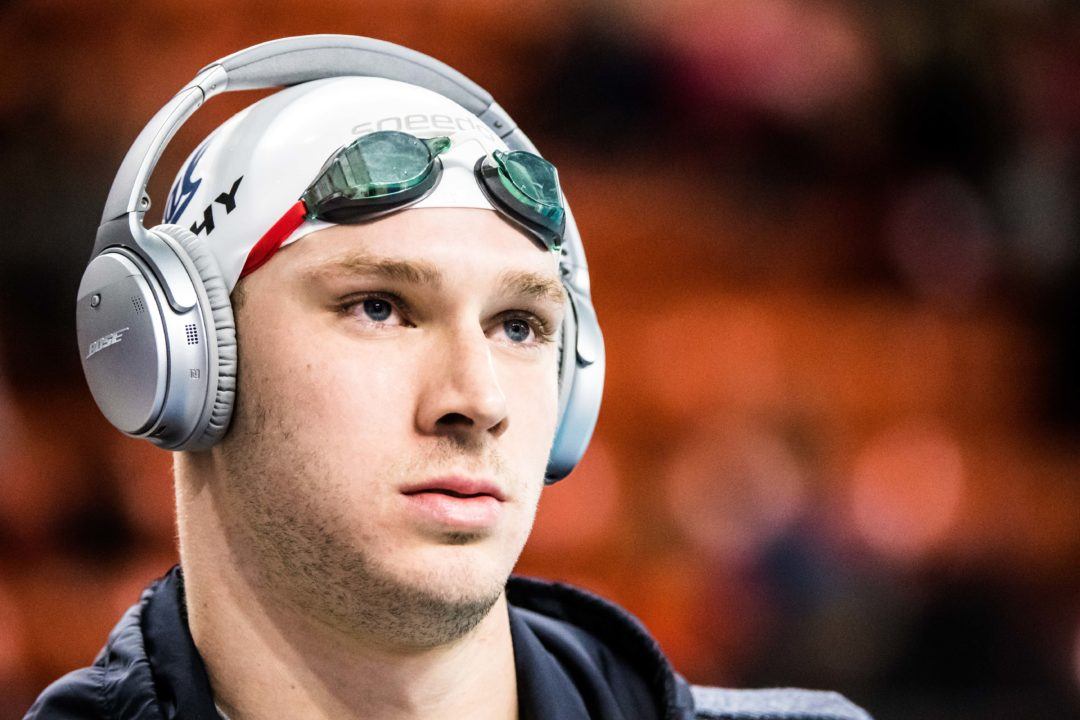 The men's 100 back continues to be one of the most competitive events in the U.S. Archive photo via Mike Lewis/Ola Vista Photography

The men’s 100 back has arguably been the most competitive event domestically for the United States over the past decade.

Ten years ago, 2007 World Championship silver medalist Ryan Lochte swam the fastest time of his career at the Olympic Trials in Omaha, but failed to make the team in finishing 3rd. In 2010, reigning Olympic champion and world record holder Aaron Peirsol won the Pan Pac title, but was only able to because Lochte scratched out of the final (only two swimmers from each country can swim the A-final, and Peirsol was 3rd fastest in prelims).

At the 2012 Trials, David Plummer swam 52.98 in the final, a time that ended up being just .01 shy of the bronze medal winning time at the Olympics, but he was 3rd. In 2014, Plummer swims a 53.19 from the B-final at Pan Pacs and bumps up-and-coming star Ryan Murphy off the 2015 World Championship team (in the event) by .02. And then, in a clash of three titans, defending Olympic champion Matt Grevers missed the 2016 team by taking 3rd to Murphy and Plummer at the Trials.

The race has been one of triumph and heartbreak for Americans in recent years, and even with the retirements of Peirsol, Plummer and 2012 silver medalist Nick Thoman, the event has not lost any of its edge. Now, Murphy and Grevers are joined by elite company in Justin Ress and Jacob Pebley.

At the Santa Clara Pro Swim in June, Murphy spoke about how he accomplished all of his childhood dreams in 2016. He always wanted to go to the Olympics, win a gold medal and break a world record. After accomplishing all three, he didn’t immediately know what his goals were moving forward. “I was swimming for a couple months not really knowing what my goals are, and it’s hard to swim, and give 100%, when you don’t know what your goals are”.

By the time he figured out his goals and “locked in”, it was almost time for World Trials and then shortly thereafter the World Championships.

There, after winning both events at the Olympics the year prior, he fell to bronze in the 100 and silver in the 200 back in Budapest. “I definitely don’t want to get beat again. I don’t like that feeling, and that’s pushed me a lot this year”.

“Not getting beat” certainly will be more important at Pan Pacs than at Nationals, but Murphy certainly wants to get back on top in the country after Grevers beat him at World Trials and Worlds, and thus got the finals spots on the men’s and mixed 400 medley relays. 2016 is the only time Murphy has been faster than the 53.24 he’s been this year in-season, so I think a big swim is coming at Nationals, 52-mid or better.

Grevers has been amongst the best in the world for ten years now, but doesn’t look to be slowing down with a pair of 53.7s under his belt this year. I don’t think anyone expected him to be as fast as he was in 2017 after his Olympic disappointment (three swims under 52.5), and he should be back in the 52s again in Irvine.

NC State’s Ress really broke out last year, beating Grevers and Murphy head-to-head at Trials in the 50 back, and then placing 6th in the event at the World Championships. He also established himself as the #3 guy in the 100 behind Murphy and Grevers with Plummer gone, taking 3rd at Trials before winning gold at the World University Games in Taipei. He was under 53.5 six times during the year, and nearly popped a lifetime best at the Columbus Pro Series in early July in 53.30. He’s a very talented all-around swimmer, hardly touching backstroke during a very successful NCAA campaign, and looks like he’s ready to join the ranks of Americans who have gone 52.

Pebley, however, has already been 52, something people forget about. In that crazy Olympic Trials race two years ago, the now 24-year-old took 4th in 52.95, flying under the radar while Murphy, Plummer and Grevers grabbed the headlines. His speed was a bit off last summer in Indy, but he’s already been within two tenths of his 2017 best this season (53.93), and will likely challenge Ress in the battle for 3rd (though with a top-2 spot all but locked up in the 200 back, he could realistically save a bit of his taper for Pan Pacs).

Those are the perennial top-4. They’re the four Americans sub-54 this year, and only one other swimmer is under 55: Ryan Lochte.

The 33-year-old really hasn’t seriously pursued this event since whiffing on the Olympic team in 2008, but was his fastest in three years in June at 54.75, and won’t have any other events on his schedule on day 4. However, I think the most likely scenario is he takes the day off in preparation for the 200 IM on day 5.

Behind the top-5, there are 15 men who have been 55-something this season.

Darkhorse: 16-year-old Carson Foster really exploded at the end of last year in the 200 back, and looks poised to dip below his 100 best of 55.61 at Nationals.

What exactly happened to Michael Taylor to caused him to stop swimming?

He hasn’t stopped swimming. He just finished his first year at Florida (swam at NCAAs) and probably wants to focus on school since it’s a hard adjustment period freshman year.

Let’s not forget Conger was 53-point like 5 years ago, but he dropped the event – 53 is good enough for an A final at best in the USA.

He’s said before that he’s done swimming the 100 backstroke seriously.

Justin Ress could break through to the top 2 this year.

The 100 LCM back is always a thrilling race to watch. The last 25 meters especially.

Ress can break the 50 back world record in my opinion. He’s not at the same level in the 100 yet. But definitely a contender to make the US team for worlds next year in the 100 too.

Ryan Murphy is one of my favorite swimmers whose talent deserves more media attention. If not to count Lochty he is the only active USA swimmer who holds world record. He has multiple Olympic and World gold medals but surprisingly only one Pan Pac bronze medal. I wish him best this season in Tokyo.

Correlation: I meant American male swimmer who holds individual world record. I thought it was evident since the article was about men’s competition.

When are you going to update the tracker?

I don’t think Shebat will make the final here, over the last couple of years he has moved away from 100 back in LC

what evidence do you have to support this claim?

mainly last year at trials, he was better in his fly and 200IM than his backstroke. He may have just had a bad swim but he hasn’t shown himself as a major contender in LCM yet