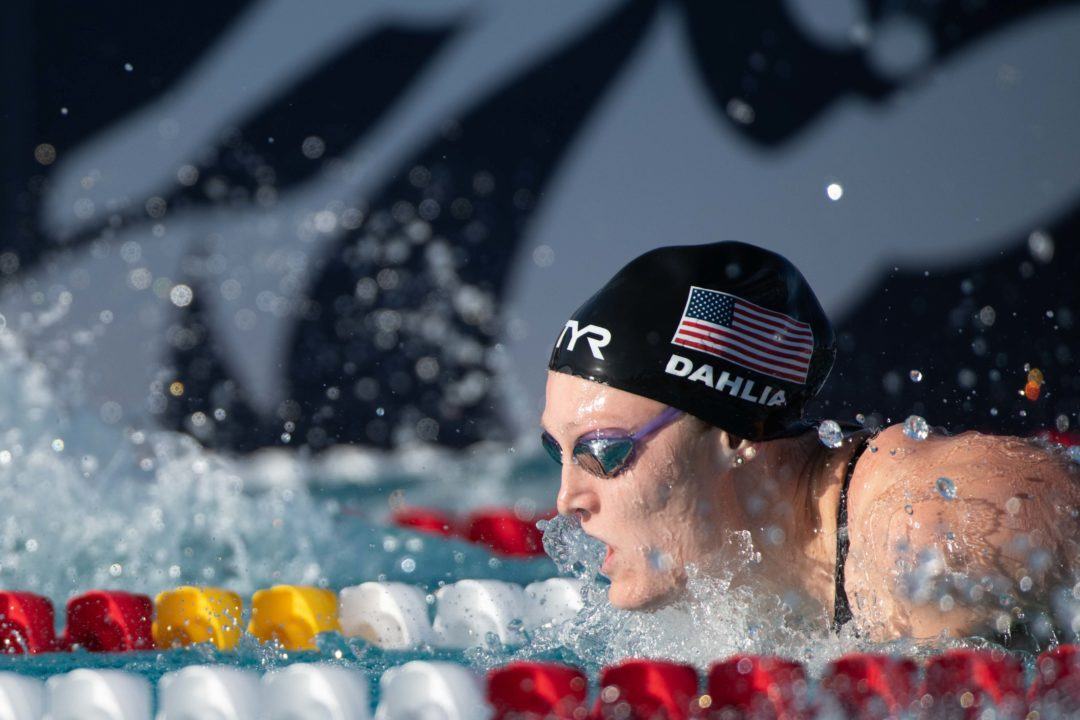 We will definitely have a new name atop the women's 100 fly at this year's Nationals, but the face likely won't be. Archive photo via Mike Lewis/Ola Vista Photography

We will definitely have a new name atop the women’s 100 fly at this year’s Nationals, but the face likely won’t be. That’s because perennial fly favorite Kelsi Worrell is officially competing under her married name of Kelsi Dahlia – but no matter what name appears in results, the times don’t look any less impressive.

Dahlia has won the last three major American titles in this event, topping 2017 Nationals (57.38), 2016 Olympic Trials (56.48) and 2015 Nationals (57.27). Dahlia has been the fastest American in this event in each of those three years, taking bronze at last summer’s World Championships. She only dropped about a tenth from 2016 to 2017 (when she went 56.37 in winning World Champs bronze), but she doesn’t need to drop any time to win this event domestically – in fact, since the end of the 2016 Olympics, no American has come within 1.5 seconds of Dahlia’s best time.

There’s a true crowd queuing up behind Dahlia for the remaining Pan Pacs and World Championships spots, though. Amanda Kendall has been the next-fastest over the past few years, going 57.87 at U.S. Open last summer. She’s already been 58.2 this season and sits second among Americans, though she’s been in the news for more dubious reasons, getting hit with a 3-month doping suspension for declaring the use of an inhaler without a Therapeutic Use Exemption.

Two more women come in within a tenth of Kendall over the last two years, though. Sarah Gibson was 57.96 at Nationals last year and Mallory Comerford 57.97. Both actually beat Kendall at Nationals and Gibson made the trip to Worlds as part of Team USA. Gibson, a Texas A&M postgrad, has already been 58.4 this year and at 23 is younger than the 26-year-old Kendall. Comerford is still in college and continues to rise, though her event focus is on the relay-distance freestyles rather than fly. Comerford does train at Louisville with Cardinal alum Dahlia, and is in the mix to make it an all-Card top two at Nationals.

A couple other post-grad speedsters return from last summer’s A final, though they haven’t had the kind of international breakthroughs that Dahlia has. Hellen Moffitt of UNC has been within a tenth of her lifetime-best 58.24 already this year, and USC grad Kendyl Stewart was third at Olympic Trials in 2016, though she hasn’t approached her 58.22 since then and hasn’t really been at her best since 2014.

Years ago, Katie McLaughlin was a popular pick to be the next great American medal threat in the 200 fly. But a 2016 neck injury derailed her Rio Olympic hopes, and since then she’s developed more as a sprinter. Her speed has come around enough that she was 58.33 earlier this summer – the best in-season swim of her career and better than any swim other than her 2015 57.8, pre-injury.

Keep an eye on Hali Flickinger, the 200 fly Olympian who had a breakout lifetime-best of 58.48 in the 100 over the weekend. Flickinger is no doubt more slanted towards the 200, and has to make a tough lineup call between the 100 fly and the 400 IM – she currently ranks 6th nationally in both, but with Melanie Margalis hinting she’ll bow out of the IM, that might be a higher incoming rank for Flickinger.

The name to watch if you’re hoping to catch an explosion is Erika Brown. The Tennessee Volunteer had a blistering college season, transitioning to butterfly only to become the second swimmer in history to break 50 seconds in the short course edition of this event. Brown’s previous best time was a 55.12 from her freshman year of college. She also displaced Dahlia herself for the fastest 100 fly split in history at 49.11. Brown has already lowered her long course best from 1:02.4 to 59.1 this season and could be in line to go 57 or better if she can transfer those short course time drops to the big pool.

Behind that group, there are a host of youngsters looking to get into the mix. Dakota Luther made the senior World Championships team last summer at 17 and has been faster this season than she’s ever been in-season before. Regan Smith has the look of Team USA’s next multi-event superstar, with some of the nation’s best times in both backstrokes and both butterflys. Cassidy Bayer is another former age group 200 fly standout who’s stagnated a little but might be a bigger threat in the 100 moving forward. She was 4th at Olympic Trials in 2016.

There will be a couple of key absences. Olympian and American record-holder Dana Vollmer has made clear she wants to contend for the 2020 Olympic team, but says she probably won’t be ready for Nationals after having her second child just about a year ago. Danielle Nack was an A finalist a year ago, but hasn’t logged a swim since her senior NCAA meet with Minnesota and might be done. Eva Merrell went 58.5 as a 15-year-old back in 2015, but went backwards a little in 2016 and missed the entirety of the 2017-2018 season so far with an undisclosed injury.

Dark Horse: Katie Drabot is a hyper-versatile swimmer who had a breakthrough in the short course 200 fly this past NCAA season. Drabot has to make some tough lineup calls, particularly between the 200 fly and 100 free on day 1. If Drabot chooses to go after the 100 free (for its extra qualifying opportunities on relays), swimming the 100 fly might be a nice compromise to see if her fly continues to surge without giving up a free event. Drabot has already been a lifetime-best 59.3 this season, dropping seven tenths of a second without even tapering yet.

Veronica Burchill without a mention?

Without Kelsi, the USA would really be hurting in this event internationally. She helps the medley relay stay on top as well.

The second spot is totally up for grabs. Erika Brown should wear the coonskin hat again for good luck.

I like Moffatt to swim a 57. She’s been the most consistent of the Team Elite West crew this year.

Agreed. I think Moffitt will be one of the front runners in this event. She has been steadily improving each year and won world university games last year.

I hate to say that because I like her very much but hopefully Mallory Comerford doesn’t qualify for worlds in that event. And if she does it I hope she lets someone else take her spot. She has enough to do with the 100 free and the relays. Swim the events in which you can medal.
Until Dana Vollmer comes back again Kelsi Dahlia is for the moment and 2 years before Tokyo the only American able to medal at the world level. Hopefully for the US medley relay she stays healthy.
Katie McLaughlin is slowly but surely back to her best, at least in the 100 fly. Not the case in the 200 fly yet.
Erika… Read more »

Whoever qualifies should swim so we have the best team.

We don’t think how y’all do in France 😆

This is Pan Pacs, not World Championships or the Olympics. This is the big meet where swimmers can swim off events and see how they do.

I think Katie McLaughlin will be dangerous. She got a big best time in her yards 100 fly (51.1) this year.

Flickinger just went a 58 low this weekend. Not even mentioned above.

I think Kendall will throw down a good one tbh..