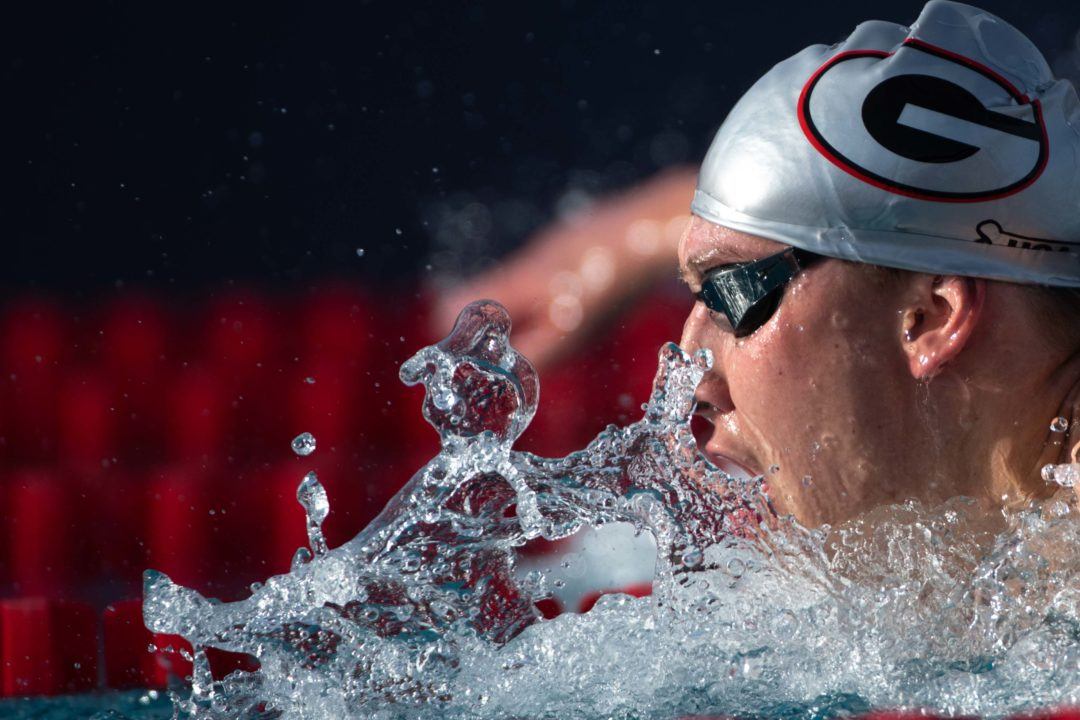 Chase Kalisz will go for a clean sweep of the 400 IM titles on the PSS circuit tonight in Columbus. Archive photo via Mike Lewis/Ola Vista Photography

Chase Kalisz and Zane Grothe are locked in a battle for the PSS points lead, as they’re currently tied with this being the penultimate finals session of the series. Kalisz is essentially a lock to win the 400 IM, considering he hasn’t lost it at all over the course of the first five stops, and thus Grothe will need to pull out the win in the 200 free to keep pace. He’ll face a competitive field including his Indiana training mates Blake Pieroni and Zach Apple, along with Michigan distance ace Felix Auboeck.

Another one of tonight’s highlights will be Leah Smith going after a tough double, as she’ll have less than an hour between the 400 IM and 200 free. The 200 free in particular should be a good race, with Allison Schmitt having her fastest swim in two years this morning in 1:58.59, and Smith swimming her fastest of the season in 1:57.64.

We’ll also have Michael Andrew highlighting the men’s 50 free lineup, as he’s coming off a big best time in the 100 fly last night. He went a PB of 21.69 this morning, and has stated he’d like to get down to 21.5 tonight.

Leah Smith and Vien Nguyen had a close battle throughout the women’s 400 IM final, with Nguyen building a two-second advantage on the breaststroke leg before Smith ran her down for the win with a 1:01.45 freestyle split. Smith clocked in at 4:37.64, her fastest ever in-season, as she moves into #7 in the world and 2nd among Americans in 2017-18.

Nguyen’s swim was her fastest since 2016, putting her 16th in the world, and Evie Pfeifer of Longhorn Aquatics dropped her personal best once again for 3rd in 4:41.95. She took two seconds off in prelims, getting down to 4:43.13, and chops another full second and a bit tonight.

Kristen Romano of the Ohio State Swim Club won the B-final in 4:46.16, lowering her own Puerto Rican National Record of 4:47.47.

Chase Kalisz had his closest race of the Pro Series in the 400 IM tonight going up against Phoenix Swim Club’s Hiromasa Fujimori, but the reigning world champion prevailed in a 4:15.16 to go a perfect 6-for-6 for the season.

Charlie Swanson of Club Wolverine swam his fastest of the season by three seconds for 5th in 4:19.38, and his teammate Tommy Cope scored a massive personal best in winning the B-final, dipping below 4:31 for the first time in 4:25.52.

Margo Geer made it eleven swims under 25 seconds for the season with the win in the women’s 50 free in a time of 24.82, just a tenth off her career-best done in Indianapolis. She’s the 2nd fastest American in the event this year, and is currently considered the front runner to earn the #2 Pan Pac spot this summer behind Simone Manuel.

Kelsi Dahlia dipped below 25 seconds for just the third time in her career, elevating her to 5th among Americans this year, and her training partner Mallory Comerford edged out Club Wolverine’s Siobhan Haughey (25.38) for 3rd in 25.35.

Also of note, after winning a swim-off to get into the A-final this morning, Katherine Douglass finished just .01 off her lifetime best for 5th place in 25.51.

Michael Andrew continues his consistent string of sub-22 second swims with his 2nd fastest ever in 21.70, just missing his best time from prelims of 21.69. That swim elevated him into #6 in the world for the year.

Wolfpack Elite’s Justin Ress finished just .02 off of his lifetime best, set at the Indianapolis stop, to take 2nd in 22.38. Zach Apple registered a season-best by over two tenths in 22.56 for 3rd, and Ress’ teammate Ryan Held took a tenth off his prelim swim in 4th (22.73).

28-year-old Ryosuke Irie put together a very impressive 200 back performance, holding all his splits under 30 to clock in at 1:55.51, dropping his season-best of 1:55.92 and moving up from 7th to 5th in the world rankings.

16-year-old Carson Foster of the Mason Manta Rays dipped below 2:00 for the first time this season in 1:59.05, his second fastest swim ever, to take 2nd and move up from t-8th to 5th among Americans this year. Russian Grigory Tarasevich from Cardinal Aquatics was 3rd in 2:00.09, just ahead of Indiana’s Jacob Steele who resets his PB for the second time today in 2:00.33.

Nicolas Albiero from the University of Louisville lowered his lifetime best for the third time in 2018 in winning the B-final, taking off almost a full second from his 2:02.01 in 2:01.12.

In an absolutely wild women’s 200 free final, Club Wolverine’s Siobhan Haughey got out to a fast start and managed to fend off the charge from Allison Schmitt and Leah Smith at the end, out-touching Schmitt by .01 for the win in 1:57.20. That’s her fastest swim of the year, and puts her 15th in the world.

Schmitt had her fastest swim in two years this morning, and was 1.3 seconds faster tonight with her 1:57.21, making her the 2nd fastest American this year behind only Katie Ledecky. Leah Smith also swam her fastest of the season in 1:57.41 for 3rd, and Gabby Deloof had a PB for 4th in 1:58.43.

Blake Pieroni used his early speed to get out ahead of the field in the mens’ 200 free, flipping in 24.94 before holding 27s the rest of the way to touch in 1:48.08 for the win and a new season-best time. He moves past Zane Grothe as the 2nd fastest American this year.

16-year old Kathryn Ackerman dropping 3 seconds after being scratched into the A-final, beating Lilly King by .41

Heck of an in-season time for Leah Smith in the 400IM. It will be interesting to see what her Pan Pacs Schedule will be like considering the 400IM, 200 Free, and 800 Free are all on the first day. God bless her if she goes for all three.

She finished really fast and will be key in three weeks

Tough but expected win at 400IM for Leah Smith. The battle at 200 free when in contrast to Leah Allison doesn’t have any doubles tonight may get exciting.

assuming he is not under heavy work cuz he went 2:10 in the 200 breast

He is probably pointing to the pan pacs not nationals. He can easily be top 3 in both IMs at the nationals even without a taper.

In the post race interview he said Jack Bauerle told him he “didn’t need to gun for this one”. Jack probably didn’t see the need to put an all out 400 IM under him 18 days out from Irvine.

Oh yeah, he was a full hundredth off! Wow. Can’t be consistent smh

S/O to Devon! He is swimming hotter than Tucson on a summer day!

MLA – The hype is real. #gethome

Curious to see how much faster a lot of these top times are at nationals. Less than 3 weeks from nationals some teams could be halfway thru a 6 week taper, or just about to start after the meet.

The very best will want to hit their taper for pan pacs. The us nationals are in an outdoor shallow pool so the times will be faster at pan pacs. Plus the competition will be stiffer with Japan, Australia, Canada and Brazil part of the meet.

Agree but the US is so deep that people could miss making pan pacs without a taper? Irvine has history of being a pretty quick pool

The times weren’t that fast last time the nationals were there in 2014. KL did set a WR at that meet, but she was the exception.