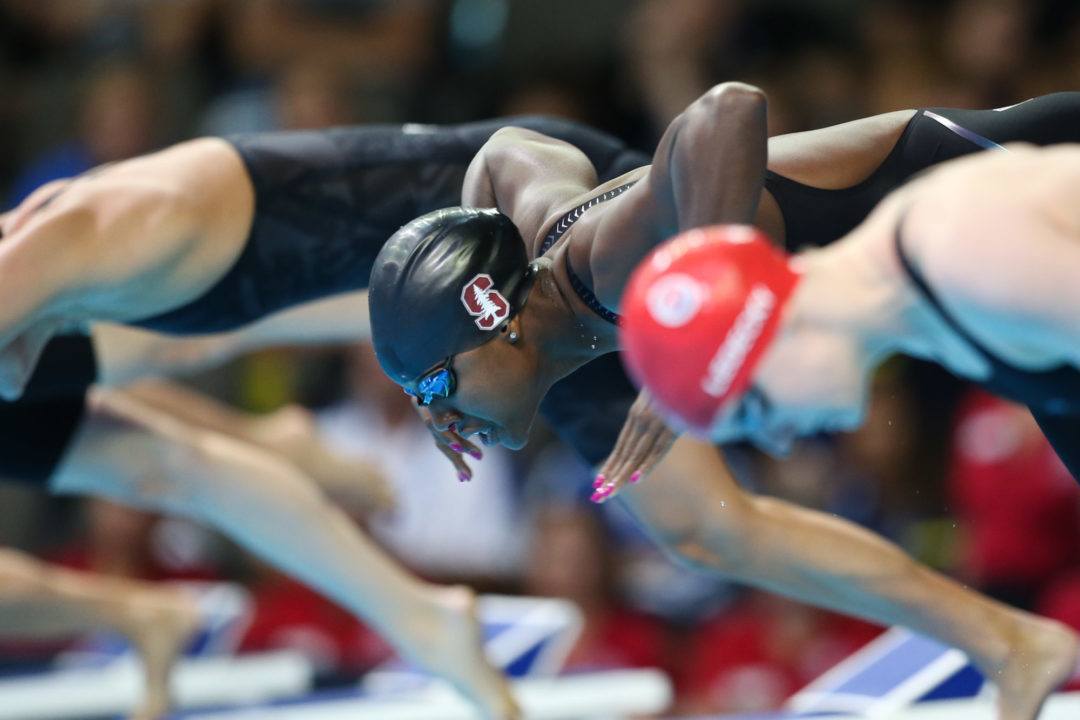 USC return this year with a highly talented group, but they'll be hard pressed to defend their title against Stanford and Cal. Archive photo via Tim Binning/TheSwimPictures.com

Simone Manuel, Katie Ledecky, Janet Hu, and Lia Neal came together to win gold in a new NCAA and American Record time of 3:08.51. With that, they also accomplished a sweep of the 2017 Pac-12 relay titles.

Louise Hansson says that she swims best when she goes in “her own little bubble.”

Last season at the Pac-12 Championships, we saw the USC Trojans win their first ever conference championship title. They return this year with a highly talented group that now includes freshman standouts Louise Hansson, Becca Mann, and Tatum Wade. They’ll be hard pressed to defend their title, however, as Stanford and Cal are huge threats this season.

Stanford already had a team good enough to contend for championships titles, but with the addition of their freshman class, they’re ridiculously good. Headlining that class is star distance swimmer Katie Ledecky, who, to no one’s surprise,has been untouchable in the distance races so far. Also returning for the Cardinal is sprint ace Simone Manuel, who redshirted last season to focus on the Rio Olympics.

Cal has also brought in some big guns with American Record holder Abbey Weitzeil now on their roster. Weitzeil is not only their top prospect to outswim Manuel in the sprints, but she may also be the key to the Bears’ medley relay. In recent years, Cal has been lacking breaststroke depth, but Weitzeil has been putting up consistent 27s on the 200 medley relay at dual meets, and threw down a 1:00.83 in the 100 breast at the UGA Fall Invite.

200 FREE: It’ll be interesting to see how the 200 free shakes out between Cardinal teammates Simone Manuel and Katie Ledecky. The event is right in the middle ground of their specialties, as Ledecky rules the long distance races and Manuel is one of the best sprinters out there. Their best times are just a tenth apart, with Ledecky boasting a career best of 1:41.04 and Manuel owning a 1:41.15. Manuel certainly has the speed, but Ledecky will be ready to come home like a train in what could be one of the best races of the meet. There’s plenty of star power in the race aside from those 2 swimmers, with the likes of Lia Neal (Stanford), Katie McLaughlin (Cal), Chelsea Chenault (USC), and Kirsten Vose (USC), and Hannah Cox (Arizona) all potentially swimming the event.

100/200 BACK: The backstroke races at last season’s Pac-12 meet were ridiculously fast, and we’ll likely see another big showdown this season. Both Cal’s Amy Bilquist (50.85) and Stanford’s defending champion Ally Howe (50.91) have already been sub-51 this season. The Cardinal’s Janet Hu (51.01) and Cal’s Kathleen Baker (51.25) have been just shy of that mark at 51-low, so we could see someone swimming in the 50-high range not even make the podium. The Cal duo of Baker and Bilquist currently hold the top 2 times in the 200 back this season, but Stanford’s Hu is not far behind. USC’s Hanni Leach looks to be the darkhorse for the podium in that race after putting up a quick 1:52-mid in their dual meet against UCLA.

50/100 FREE: The sprint freestyles will give us a first look at Cal’s Abbey Weitzeil, the 50 free American Record holder, against Stanford’s Simone Manuel, the 100 free American Record holder, in an NCAA championship format. Of course we can’t count out Cal’s Farida Osman, who was lightning fast at the 2016 conference meet. USC’s Anika Apostalon, Arizona’s Katrina Konopka, UCLA’s Linnea Mack, and Stanford’s Lia Neal are also among the podium threats in the sprints.

USC is bringing in a talent-heavy team to defend their Pac-12 title, but Stanford looks almost unbeatable at this point. We could see the Trojans give the Bears a run for their money, however, if it came down to a close battle between those 2 teams. Most of Arizona’s top performers from last season are returning, and they’ll likely hold on to their 4th place standing from last season ahead of UCLA. The Sun Devils have been looking good under Bob Bowman, and look like they’re in good position to improve from their 8th place finish last season.

Does anyone know if this meet can be viewed in Florida? My cable company is DirectTV and is not a Pac12 provider? I think I’m just out of luck. I’m tempted to fly to the west coast and rent a room for the week just to watch. I’m just kidding. ?

PAC 12 network online for prelims. I think free app. Finals on tv network. If cable co doesn’t carry then something like sling tv thru Apple TV for 20-25 dollars a month can get you PAC 12 network.