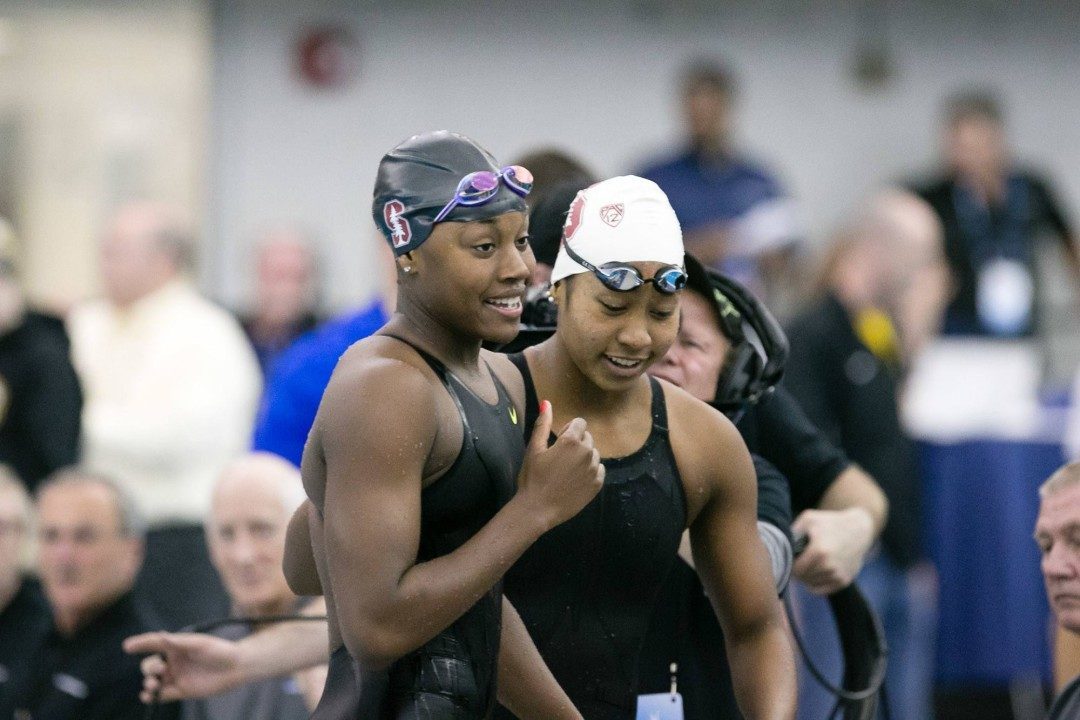 Simone Manuel, Katie Ledecky, Janet Hu, and Lia Neal came together to win gold in a new NCAA and American Record time of 3:08.51. With that, they also accomplished a sweep of the 2017 Pac-12 relay titles. Archive photo via Tim Binning/TheSwimPictures.com

The Stanford women closed out the 2017 Pac-12 Women’s Swimming and Diving Championships with a bang. In the 400 free relay, the Cardinal squad of Simone Manuel, Katie Ledecky, Janet Hu, and Lia Neal came together to win gold in a new NCAA and American Record time of 3:08.51, clipping a few hundredths off the former record set by Stanford at the 2015 NCAA Championships. With that, they also accomplished a sweep of the 2017 Pac-12 relay titles.

Manuel’s leadoff split of 46.47 was a few tenths faster than Neal’s 46.84 on the 2015 relay, but Neal’s 46.45 on tonight’s relay was about 7 tenths shy of Manuel’s legendary 45.79 anchor leg in 2015. We could see the Cardinal switch up the order at NCAAs, as Neal has put up some strong performances as the leadoff swimmer in the past.

Great swim but here’s something crazy that I’ll probably never say again, but ledecky was kind of a liability on that. Slowest split from a flying start on any of the top three relays. Obviously it’s not really an event in her wheelhouse but you don’t see ledecky being the slowest oftentimes.

Just goes to show Stanford’s amazing success is not entirely due to Ledecky…many Stanford swimmers are absolutely on fire at this meet. NCAAs is going to be so much fun to watch.

Agreed. And the truth is– there are other Stanford women that are faster sprinters than Ledecky. Eastin could put up a 47.9 relay split. In other words, if coaches were being firm about times, she should be left off this relay. But not gonna happen.

True, but trust me, as a former 400 IMer, doing that event twice the day before is a KILLER

Ledecky couldn’t even get on 4×100 free relay at OT being #7 with 53.99 time. And then two 52.6, 52.7 splits followed completely unexpected. Probably because of her hard training the tapering process is very effective in her case. I hope she will be faster in March and her relay participation at this meet isn’t because she is Ledecky but because coaches value her reliability and believe that that will be the best tapered team they can assemble.

Absolutely – Given her taper/rest history she will be on the relay and NCAAs and will split 47. low. Can this relay go sub 3:07? It will be close!

Agreed. This is the conference meet, no NCs. She’ll split a second faster next month.

…or she just didn’t have that great of a swim on that day?

Ledecky was out faster at the 50 anchoring the 4×200 relay…spinning her wheels maybe? I feel like there is no reason she cant be 47 low in this relay given another month’s speed work/rest.

The voting links seem to have disappeared. Have they been removed? Thank you.

Hallelujah! The moment when you find actual race videos!!!