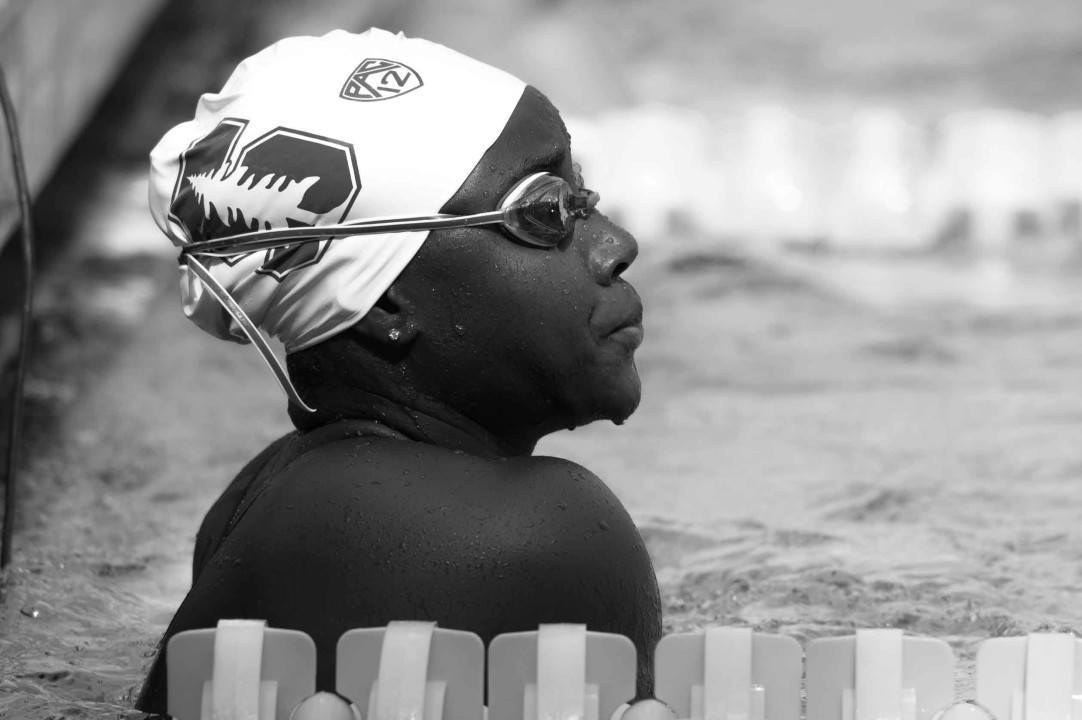 Simone Manuel will look to lead Stanford back to the top of the podium in the 400 free relay. Archive photo via Mike Lewis/Ola Vista Photography

After an incredible NCAA and American Record performance in late February at the Pac-12 Championships, the Stanford women are the clear frontrunners in the 400 free relay at NCAAs. The lineup they boast is incredibly stacked, featuring three members of the American 400 free relay at this past summers Olympics (including prelims), not to mention both the 100 free and 200 free Olympic gold medalists in Simone Manuel and Katie Ledecky.

In that swim at Pac-12s, Manuel led off in 46.47, just about four tenths off her own American Record of 46.09. Based on how she has looked this year, the chance she cracks the 46-second barrier is definitely viable, though the 400 free relay being the last event of a tough meet can always have an impact.

Lia Neal, who sits 4th in the 100 free rankings so far this year, gives Stanford half of the women who have cracked 47 seconds this season and a formidable lead-off/anchor duo. Janet Hu is a very reliable 47-mid in the third slot, and Ledecky is certainly capable of going better than the 48.1 she split at Pac-12s.

Stanford wasn’t the only fast team in this race at Pac-12s, as the top three seeds all come from the conference. USC finished just over a second back of Stanford in 3:09.57, and Cal was just another half second back of them in 3:10.15.

USC has four strong legs, led by Louise Hansson who led off that relay in a 47.03, and Anika Apostolan who anchored in 46.91. It doesn’t look like they have the firepower to compete with Stanford, but with a 47.0 lead-off, two sub-48 middle legs and a sub-47 anchor they’re definitely in the medal picture. They are the defending champions from last year.

Cal’s season best of 3:10.15 interestingly came without the #2 performer all-time in the 100 free Abbey Weitzeil, whom they opted to use on the 200 free, 800 free and 200 medley relays instead.Per the NCAA rules, Weitzeil will be allowed to swim four relays plus her three individual events, meaning she’ll almost definitely be added to their 400 free relay roster.

Holding the three other legs constant at their Pac-12 splits, the addition of Weitzeil improves Cal anywhere from 1 to 2 seconds, pulling them to within reach of Stanford. The 2016 Olympian did not swim the individual 100 either at Pac-12s, but her season best of 47.22 from the Georgia Invite is 1.16 faster than Kristen Vredeveld‘s 48.38 lead-off at the Conference Championship.

Coming in seeded fourth is NC State, who put up 47s across the board to win ACCs in a time of 3:10.31. Though regarded as more of a backstroker, senior Alexia Zevnik was a 47.38 leading off that relay, the fastest she’s ever been. If all four of them are around the same where they were in Atlanta, they’ll be in the hunt for a medal.

Coming in behind them at ACCs was Louisville, who have a gem in Mallory Comerford. Comerford won the individual 100 in a blistering 46.75, and split 46.68 on the relay. Though she will likely have one of the fastest splits in the field, the Cardinals don’t quite have the four legs that are needed to be in a top three to four position, but should get in the A-final.

Olivia Smoliga will be key to Georgia’s success in the 400 free relay. (Photo by Tim Binning)

Georgia also has a formidable lineup with the #5 all-time performer Olivia Smoliga and 400 free relay Olympic medalist from Canada Chantal van Landeghem. Rumor has it that some of the Georgia women weren’t tapered much for SECs. Smoliga’s relay lead-off was nearly a second slower than her 46.95 done at the Georgia Invite, though her individual was a solid 47.37. Seeing as they’ll likely drop about a second from Smoliga alone, and if they can get small drops from their three other legs, they can be contenders for a top three finish.

Texas A&M comes in seeded 9th, but were third last year and shouldn’t be counted out. They return that entire relay, though likely keeping on freshman Amy Miller over Claire Rasmus, who swam the event last year. They will need Beryl Gastaldello (47.1 lead-off) and Sarah Gibson (47.7 split) to be close to where they were a year ago to contend in the top five.

Texas is another team to watch out for, with a couple of surefire 47s in Rebecca Millard and Claire Adams, not to mention their taper for Big 12s was likely minuscule, if they tapered at all.

After battling it out at Big Ten’s, Wisconsin and Michigan will be in the mix for a spot in the A-final as well. Both North Carolina and Arizona have also been 3:13 this year, and will be in the fight for the top eight.

It would be interesting in the future to see top 10 or 12 predictions to see who the writer are close to making finals as well.

Will we see the record broken? This relay is the last event of the meet. Swimmers can get tired. Also this last session starts with 1650 race followed by 100 freestyle final. Do we know how Stanford’s relay team will look like?

It’s most likely Manuel, Neal and Hu and it’ll be interesting to see if Greg puts Ledecky as the fourth or putting someone else like Howe, Engel or Drabot.

How can anyone not put Ledecky on? It’s like not putting MP on the Rio 4 X 100 free relay just because he didn’t swim it at OTs. She’ll have an insane split (just like MP did). She probably only needs 10 minutes rest, she’s so insanely fit.

*Stanford stacked in EVERYTHING