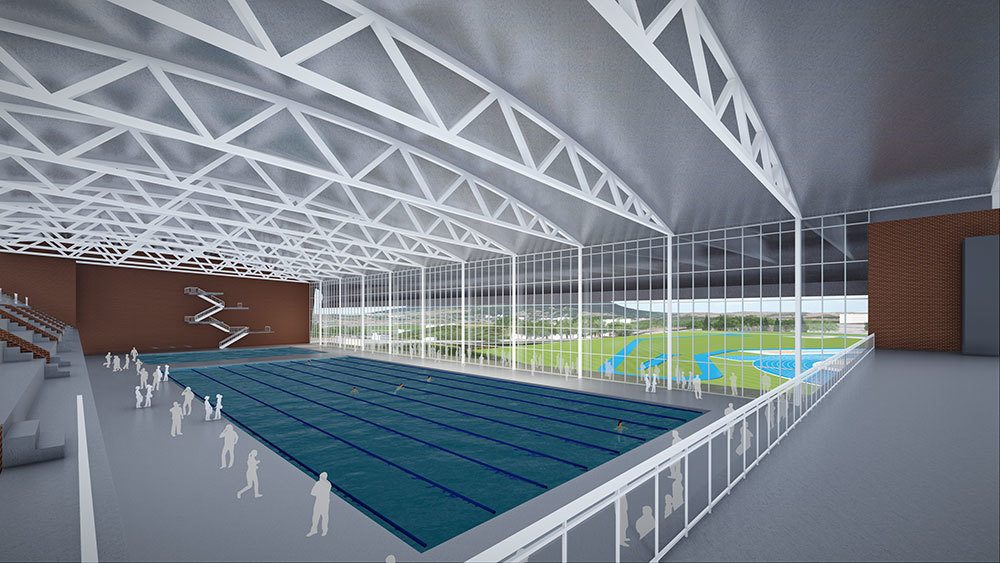 Penn State University released plans to build a new pool that will be 130,000 square feet and include a 10 lane, 50-meter pool with the ability to seat 2,500 spectators. Current photo via Photo Courtesy: Penn State Athletics

McCoy Natatorium may be known for its history, dating back to 1967, but it’s certainly not known as one of the best university pools in the nation. Penn State University announced new plans to make changes to this facility and build out a Natatorium with a 10-lane, 50 meter pool. The university has spent the past 17 months developing these plans across 23 venues, but the Natatorium is a highlight that all current, past and future swimmers will be excited about.

“These facility resources will greatly assist in our vision of creating conditions for success for our student-athletes as we prepare them for a lifetime of impact. We look forward to engaging with our key stakeholders to most effectively and efficiently activate this plan,” Sandy Barbour, Director of Athletics, stated in a press release.

The Nittany Lions’ current practice and competition facility does not include an indoor 50-meter pool, though they do have an outdoor 50 meter. It’s currently 50,400-square feet with plans to nearly triple the size making it 130,000 square feet. Another upgrade that will benefit the program are the plans to build a separate diving area from 1, 3, 5, 7.5, and 10-meter boards and platforms. This will make a huge difference for the diving program that has never had access to platform boards inside McCoy.

The plans for the new facility also highlighted two levels of spectator seating 2,500 people and a new media facility. This will give the university opportunity to host national level meets for both swimming and diving.

In 2011, Penn State announced renovation plans to McCoy Natatorium but they were suspended indefinitely after the university was hit with $60 million in NCAA sanctions related to the university’s response to child abuse by former assistant football coach Jerry Sandusky. The money for the Natatorium was originally supposed to come from three sources: $30 million from student activity fees since it would have been open to student use, $25 million from the athletic department and $10 million from donations.

This time around, Intercollegiate Athletics is hoping to raise a minimum of $120 million in philanthropic gifts to start the first five venues. While Penn State has developed a 20-year plan to upgrade 23 venues, the Natatorium falls in a “priority project” and will be built in the initial five years of the plan. Construction on any facility isn’t expected to begin until 2018-19 at the earliest.

The render pictures of the pool that Penn State released can be found here.

Have you seen u of i’s pool?

Iowa has on of the best pools in the country. Coaching staff on the other hand….

Illinois at least has an indoor 50 meter pool with a separate diving well.

Have you seen the University of Wisconsin’s competition pool?

One correction. Penn State does have a beautiful outdoor 50 meter pool.

Agree. What year was that built?

I’ll believe it when I see it. They’ve been saying this since the early 90’s. I remember JoePa doing a big reveal on the pool deck announcing a new pool back in the mid 90s. PSU has let so much talent slip through their fingers it’s embarrassing. All their talent has gone to UVA, UGA, UTenn, etc and they keep making promises they can’t keep.

9
-1
Reply
Know It All
Reply to  xPaSwimmer

Sandy Barbour gets things done, she’s clutch. All sports are on the upswing with her.

2
-1
Reply
Know It All
Reply to  xPaSwimmer

If funding is received, PSU has gotten buildings done in a year so wouldn’t be shocked to see this done sooner (despite the long wait)

What’s the latest on the Penn State Natatorium? Have they broken ground n it yet or at least announced where the actual location will be (it was to be decided between two possible locations).