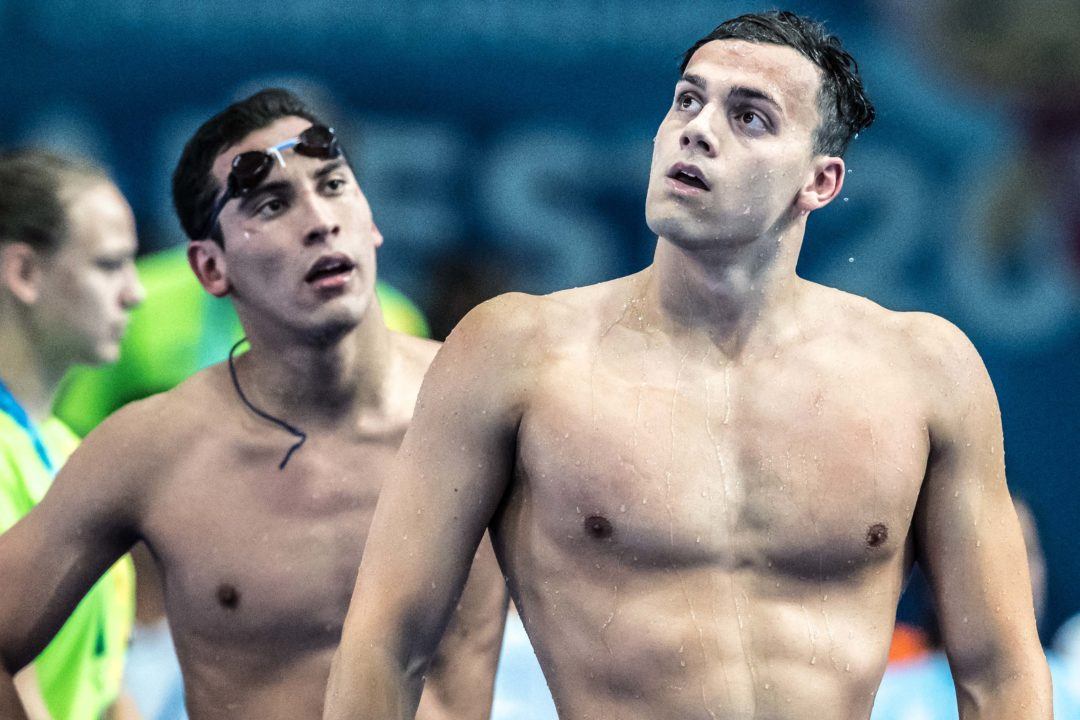 Defending 200 free world champ James Guy will be back in the pool in the heats of his best event on day 2. Current photo via Mike Lewis/Ola Vista Photography

The second preliminary session of the 2017 FINA World Championships will feature a total of five events: the women’s and men’s 100 back, women’s 100 breast, men’s 200 free, and women’s 1500 free. Four of the five will advance the top-16 to the semi-finals on day 2, while the top-8 in the women’s mile will advance straight to the final scheduled for day 3.

First up will be the women’s 100 back, which is bound to be an exciting event with plenty of big names. The first circle-seeded heat will have Americans Kathleen Baker and Olivia Smoliga side-by-side, while the last heat features world #1 Kylie Masse and defending champion Emily Seebohm. In between the two, Olympic champion Katinka Hosszu takes the middle lane alongside China’s Fu Yuanhui, who tied Masse for Olympic bronze behind Hosszu and Baker in Rio.

This is an event where Hosszu could potentially scratch, as the semi-finals take place shortly prior to the 200 IM final. She’ll likely swim the heats and re-evaluate from there.

In the men’s event, defending champion Mitch Larkin, world #1 Xu Jiayu and Olympic champion Ryan Murphy will take lane 4 in their respective seeded heats. 2012 gold medalist Matt Grevers, the only other man seeded under 53 seconds, will swim alongside Murphy in heat 5.

Initially seeded 5th at 52.76, Russian Evgeny Rylov has scratched the event, opening a spot for world junior record holder Kliment Kolesnikov. Kolesnikov will swim alongside the other Russian, Grigory Tarasevich, in heat 4 with Xu.

The women’s 100 breast will be the 1st of a three round battle between American Lilly King and Russian Yuliya Efimova.

They won’t cross paths just yet, as world #1 Efimova will swim in the sixth of six heats alongside world record holder Ruta Meilutyte of Lithuania. King will swim in heat 5, and her American teammate Katie Meili headlines heat 4.

The men’s 200 free is another race that’s expected to be tightly contested and thus very exciting. Fresh off a title in the 400 free on day 1, China’s Sun Yang will center the last heat, flanked by defending champ James Guy and his British teammate Duncan Scott.

The first circle-seeded heat includes Park Tae Hwan, Mack Horton and Aleksandr Krasnykh, and the 7th heat will be headlined by Americans Townley Haas and Blake Pieroni. Olympic silver medalist Chad Le Clos is also scheduled to swim in heat 7, but rumor has it he will scratch. We’ll have to wait and see. For now, he’s still on the start lists.

Initially the #4 seed, American Leah Smith has decided to scratch the women’s 1500 free. That makes the event even more wide open, as there are only 22 women scheduled to swim.

Katie Ledecky is the overwhelming favorite, while Hungarian Boglarka Kapas is the clear favorite for silver. Ledecky will swim in heat 3 with Spain’s Mireia Belmonte, who missed the 400 free final on day 1. Kapas made the 400 final but was a bit off her best, which could open up the battle for the minor medals. One who could step up is Italian Simona Quadarella, who will swim beside her in the 2nd heat.

You can find all the start lists for day 2 prelims here.

I don’t expect anything dramatic from prelim races tomorrow. All major players will proceed to semifinals. The only race of interest is W1500. If Katie Ledecky is capable to improve her personal best in this event it is very possible that she will go for the world record tomorrow.
Her today races sent a confusing message. If she swam 400 at the same level as at trials to save energy for relay then why did she swim relay at trials level. If she swam 400 to the best of her current form then again why it is at trials level. She is tapered now. It is very confusing.
If she didn’t swim 400 at her best to save… Read more »

Dude she is way ahead of every one, after Ledeckys post Rio success, its not as easy to improve in every event while dominating the field. She is the one that everyone is chasing. In Rio it showed that she managed to have Speed while keeping the endurance with her 52 split and winning the 200.

Women’s 1500m: WR watch for Ledecky, like always. However it will be interesting to see where Kapas amd Belmonte are at, afterimg a dissapointimg day 1 for both. I’m liking Quadarella for the silver right now, but the heats could change that.
Women’s 100 breast: The rivalry between King and Efimova will only get more heated as this meet goes on, and I think rhe first round will reflect that. It wall also be interesting to see if someone comes out as a favorite for the Bronze.
Mens 200 free: I’m disappointed that Le Clos scratched, though I guess he’s puttimg all his cards into regaining the 200 fly title. Sun was absolutely dominant in his heat, and… Read more »

I have a feeling the women’s 100m Back silly suit record will fall in the prelims or semis….too much talent this time for it to survive! Who will it fall to ???

10
0
Reply
Coach B
Reply to  Torchbearer

Wouldn’t be surprised if one of them takes it in prelims/semis and hosszu downs it again in finals. Leaner than ever. Will be fast…

Gonna see a lot of fast time from the girls in 100 back, Masse, Baker, Hosszu and Seeborm, won’t be surprised to see 58.5s in the prelims!

I might be late to this- but is Margalis no longer with dolfin? I’ve seen her speedo suits recently…

Boomer Phelps will swim in the prelims of the 200m free, advance to the semi finals out of land 8, break the world record from that same lane, and finally scratch finals.

While not losing his pacifier in the process.

I heard he did that in practice

No, that was the great white shark. Boomer Phelps was in Lane 1. 6th in the heat. Ahead of Sun Yang.

Ah the swimming memes are getting spicy

It’s going to be by Townley Haas. You heard that here first.

no way park all the way

Haas is on fire …..he is the man to beat

47.4 split was very impressive. He has the speed now to go with the endurance.

We’ve seen Sun in that form many times before and he’s never hit 1:43

If Townley’s relay splits count, I think Sun’s 143 split should count as well.

I’m only using Townley’s relay split to show he’s got the front end speed to hit 1:43. He’s shown it several times now. At trials and at worlds. Sun hasn’t replicated a 1:43 split or shown front end speed to get there from a flat start

Sung Yang is the only one who can do it imo