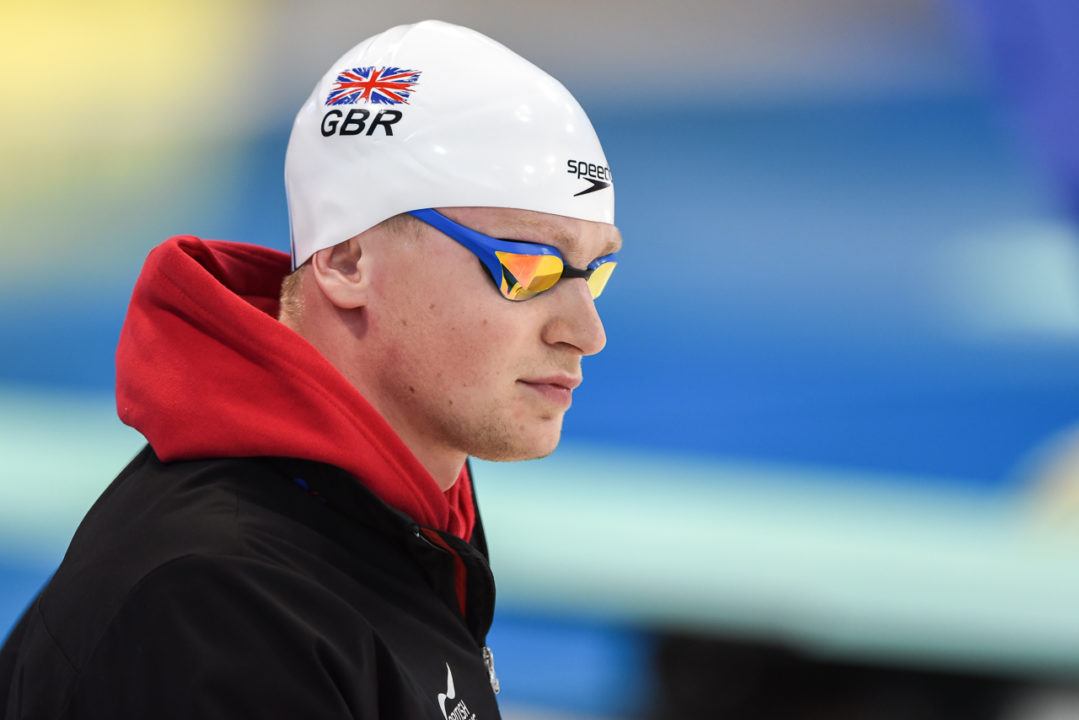 Among the stacked international talent headed to IUPUI Natatorium in Indianapolis later this week for the Arena Pro Swim Series is a huge over 40-members British contingency that includes multiple Olympic medalists and national record holders. Both veteran athletes, as well as up-and-coming talent are expected to make the trip, giving the Americans and other foreign standouts a great pre-Budapest tune-up.

Among the British Men…..

Big names along the lines of 100m breaststroke Olympic gold medalist and reigning world record holder Adam Peaty are embedded throughout the recently-released psych sheets, but even he isn’t sticking to his usual event schedule.

Peaty is entered in his specialty, the men’s 100m breaststroke, as well as the 200m distance of that discipline, but the 22-year-old British star is also hidden within the men’s 200m freestyle entries. He sits as the 67th seed in the event, holding an entry time of 1:58.08, a mark which may or may not be legit since he has rarely competed in the event. Per the psych sheets, the newly-minted Loughborough squad member is also set to swim the 50m freestyle, where he heads to Indy as the 80th seed in a time of 24.88, the exact same mark as 3 other British teammates.

One of those teammates is Andrew Willis, the 2016 Olympian who will be contesting not only that off-event, but also his bread-and-butter 200m and 100m breaststroke races where he holds the 2nd and 10th incoming seeds, respectively. University of Stirling standout, Ross Murdoch, is also making the trek across the pond, with the 2016 European Champion expected to compete in both the 100m and 200m breaststroke events alongside his compatriots.

Reigning 200m freestyle World Champion James Guy is your top seed in both that event, as well as the 400m freestyle. The Bath elite squad member will also be competing in the newest event in his repertoire, the men’s 200m butterfly. He’s been adding butterfly to his racing line-up more and more, most recently with the 100m butterfly in Somerset earlier this month where he scored a time of 53.19.

2016 Olympic medalists Dan Wallace and Duncan Scott will try Indy on for size as well, with both men taking on the 200m freestyle, while Wallace aims for the 200m IM/200m breast and Scott tackles the 100m butterfly and 100m freestyle. In the latter event, Scott surprised the men’s field at the 2016 Olympic Games, where the 18-year-old managed a time of 48.01 for 5th place. He enters this Pro Series as the 4th seed behind Nathan Adrian, Luca Dotto and Vlad Morozov.

Youngsters Luke Greenbank and Cameron Kurle are making the trip as well. Greenbank is looking to make his senior mark after claiming multiple golds at the 2015 European Games, while Kurle is coming off having made the British Olympic roster as a prelim 4x200m freestyle relay swimmer at just 19 years of age.

Among the British Women…..

A mega-accomplished women’s squad from Great Britain is also making the journey, led by two-time Olympic silver medalist Jaz Carlin. The Bath star is seeded first in her best events, the women’s 400m and 800m freestyles, while also holding the 2nd seed in the 200m freestyle behind Italy’s Federica Pellegrini. Sans Katie Ledecky, who is coming off a super successful PAC-12 Championships and is now focusing on her NCAA Championships, Carlin could be the one to come away with at least two mid-distance freestyle titles when all is said and done in Indy.

Young Kathleen Dawson will also be in attendance, as will Newcastle’s Emily Large. Dawson holds Scotland’s backstroke national records across the 50m/100m/200m distances in both short and long course and enters the meet as the top seed in the 100m distance. Dawson is also set to compete in the 100m freestyle at IUPUI as well.

As for Large, the British Junior National Record holder is listed as swimming 6 events, including the 200m/400m IM, 50m/100m freestyle and the 100m/200m butterfly races. The 16-year-old’s highest seed comes in her specialty, the 200m butterfly, where she is ranked 5th among the entrants in her time of 2:08.87, her gold medal-winning time at last year’s European Junior Championships.

Another youngster is set to make an appearance across multiple events in the form of 15-year-old Freya Anderson. British Swimming’s ‘Emerging Star of the Year’ for 2016 is the 10th seed in the 100m freestyle race, an event in which she scored a British Junior National Record in last year (SCM). Anderson will also be contesting the 50m freestyle and 200m freestyle, along with the 100m breaststroke.

Expect a British breaststroking battle between Chloe Tutton and Molly Renshaw, as the two 20-year-olds are ranked 1st and 2nd in the 200m event. The pair finished in 4th (Tutton) and 6th (Renshaw) at the 2016 Olympic Games, with Renshaw setting a new National Record of 2:22.33 in the semi-finals. In Indy, Renshaw is entered in that NR time, with Tutton just .01 behind in 2:22.34. They’re both within the top 10 entrants of the 100m event as well.

Veteran swimmer Hanna Miley will be in the mix for medals at the Pro Swim, taking on a heavy racing schedule that’s been characteristic of the 27-year-old throughout her career. Miley ranks highest in the IM events, where she enters the meet as the 2nd place seed in the 400m IM and 3rd place in the 200m IM. She’s also ranked 4th in the 200m butterfly race, so look for her to make a move in any or all of those contests. Miley’s line-up also includes the 200m breaststroke, 400m freestyle and 200m freestyle, should she maintain her entire schedule.

Right, this was a British Swimming-focused piece.

This an article about British swimmers

This is great to see these different NT come to the PSS, hopefully it continues to happen!

No chance … have u seen his freestyle ?