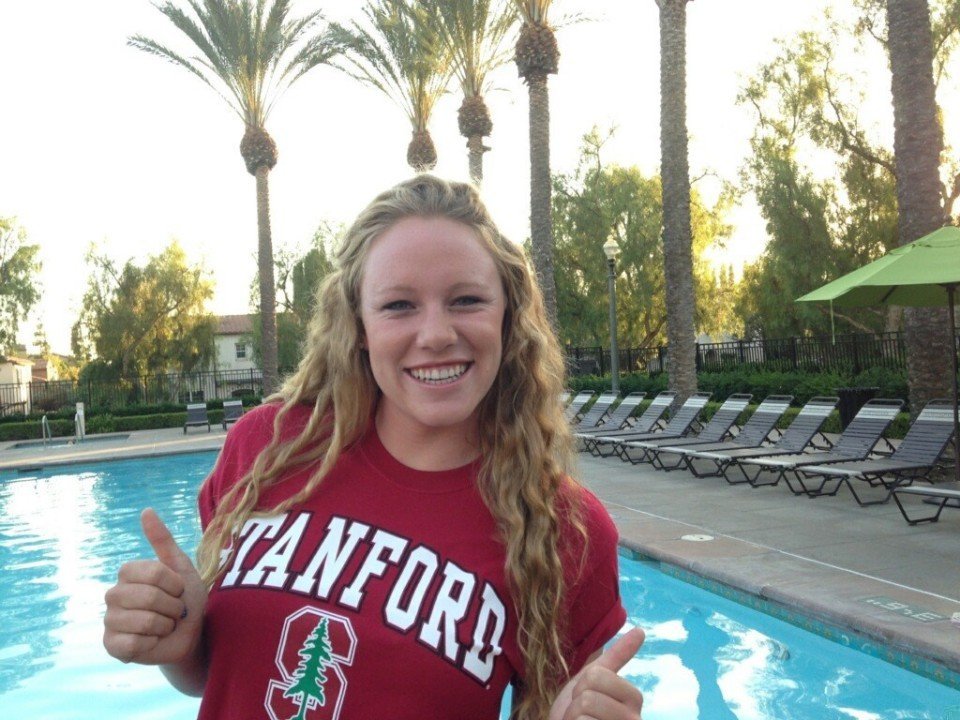 This season, a pair of freshman are up to challenge Leverenz's 1:51.77. Those freshman are Stanford's Ella Eastin and Cal's Kathleen Baker. Archive photo via Ella Eastin

Last season at the NCAA Championships, Caitlin Leverenz’s NCAA and American Record survived another year as Missy Franklin missed it by less than 4 tenths. This season, a pair of freshman are up to challenge Leverenz’s 1:51.77. Those freshman are Stanford’s Ella Eastin and Cal’s Kathleen Baker. Eastin and Baker come into the meet as the 1st and 2nd seeds with times of 1:52.77 and 1:52.80, respectively. Those times are from their extremely close showdown at the Pac-12 Championships, and they’ll be back to push each other again at NCAAs.

Coming into the meet, Eastin and Baker are 1.5 seconds ahead of anyone else. Texas’ Madisyn Cox is the 3rd seed with a 1:54.27 from Texas Invite. Cox brings some experience to this race at NCAAs this season. She was 3rd in this event in 2015.

Texas A&M’s Lisa Bratton and Michigan’s Siobhan Haughey also enter the meet with sub-1:55 times. They’re tied for 4th at 1:54.97. Haughey is a freshman, and will be swimming this event for the first time at NCAAs. Bratton was in the consolation final last season, placing 11th in this event.

Less than 2 tenths back is Virginia’s Kaitlyn Jones. Jones and Texas A&M’s Bethany Galat enter the meet as the 6th and 7th seeds with a pair of 1:55-lows. Jones put up a best time of 1:55.11 at the UGA Fall Invite this season. Galat’s seed time of 1:55.22 is from the SEC Championships.

Jones’ Virginia teammate Courtney Bartholomew holds the 8th seed with her 1:55.63. Bartholomew was 5th in this event at last season’s NCAAs, and will look to challenge for a top spot again.

Among the notable names to look for in this race, Cal’s Liz Pelton comes into the meet 13th with a season best of 1:55.98. Though she’s been off the mark in this event so far this season, it’s definitely possible that she could be a factor. Pelton was 2nd in this event last year at NCAAs with a 1:52.80. Pelton had hand surgery last July, and could challenge for the event, depending on whether or not the injury is still a factor.

Darkhorse: Cal’s Celina Li comes into the meet with a season best of 1:55.79. However, Li’s best time is a 1:53.85 from the 2014 NCAA Championships. If she can get back to that level, she could be in the running for a top 3 finish this weekend.