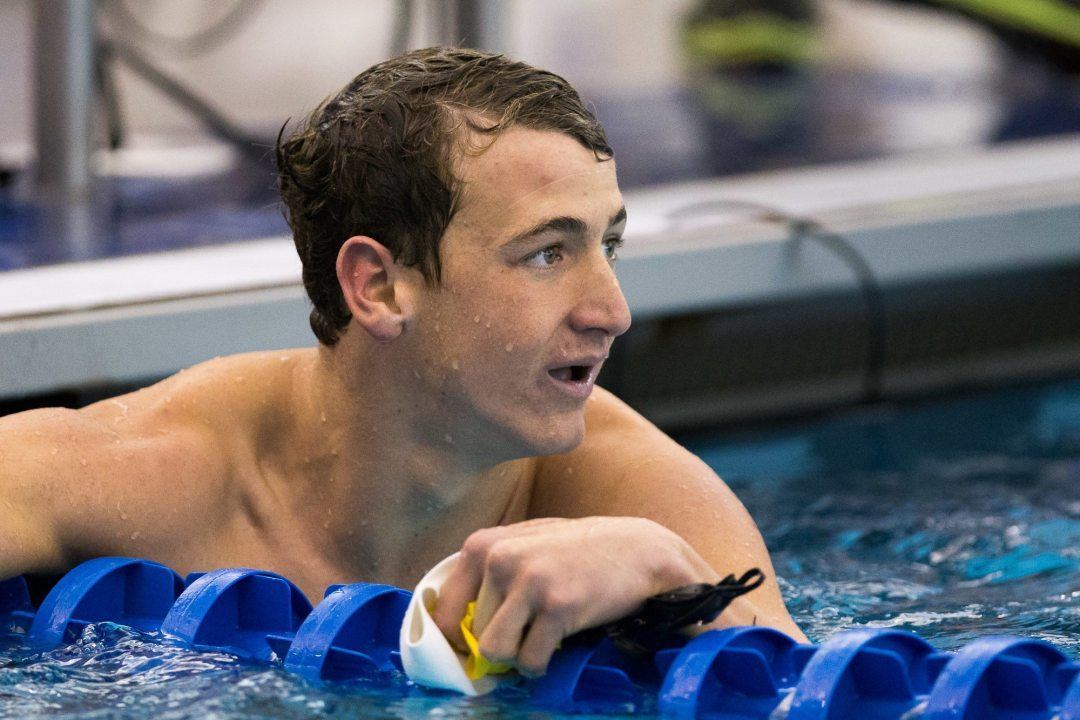 The men's 50 free will feature Ryan Hoffer, who ripped an incredible 18.88 this morning. Archive photo via Tim Binning/TheSwimPictures.com

Texas Ford Aquatics’ Gabrielle Kopenski made a massive drop from her prelims time, smoking the field with her 4:37.94 for gold. The race for 2nd got interesting in the last 100 yards, as Taylor Ault trailed Haley Yelle before dropping a 55.50 on the final 100 split. Ault wound up with silver in 4:41.88, while Yelle took bronze in 4:43.35.

Austin Swim Club’s Dakota Luther finished just off the podium with a 4:44.27 for 4th place.

It took a sub-4:20 to make the podium tonight in the men’s 500 free, with the top 4 swimmers all posting times in the 4:19-range. Patrick Callan jumped out to lead by over a second through the first 200, and held off the field for gold in 4:19.07. Top seed Jack LeVant started to make his move in the middle 200 of the race, but faded on the last 100 to finish 4th behind silver medalist Zach Yeadon and bronze medalist Alexander Zettle.

Future Pac-12 rivals Bryce Mefford and Alex Liang went head-to-head in the 200 IM. Despite Liang’s big move on the breaststroke leg, Mefford, a Cal commit, was able to hold his lead on the freestyle. Liang, a Stanford commit, was tenths behind for 2nd as both finshed in the 1:45-range.

Grace Ariola tore through the water en route to a 22.20 victory in the 50 free, just out-touching silver medalist Eva Merrell (22.26). It took a 22-low to make the podium, as Daria Pyshnenko and Amalie Fackenthal tied for bronze in 22.30.

Ryan Hoffer blew away the field once again in the 50 free, winning the final with an 18.71 to drop another .16 off his best time from prelims. With that, he’s now within .04 of the 17-18 NAG Record set at 18.67 by Caeleb Dressel. He still has the option of leading off the 200 free relay later in this meet if he wants another shot at it.

Fort Collins Area Swim Club took control of the 400 medley relay, with Colleen Gillilan putting up a 52.72 effort on the butterfly leg to help her team to gold. Their breaststroker, Zoe Bartel, added to her medal total tonight with a 59.19 on the breast leg.

Scottsdale Aquatic Club picked up their 3rd relay title of the weekend, with Ryan Hoffer giving them the early lead after a 46.51 backstroke split. In a close battle for 2nd, Corban Rawls threw down a 44.67 freestyle split to give Nitro Swimming the silver ahead of Palo Alto Stanford Aquatics.

Is there going to be a live stream? I see a live stream link on USA.Swimming, but it doesn’t seem to be streaming finals. The repeat from this mornings prelims is on…

The title says prelims – the finals are streaming in the box. West on now. It says prelims too, but it’s not.