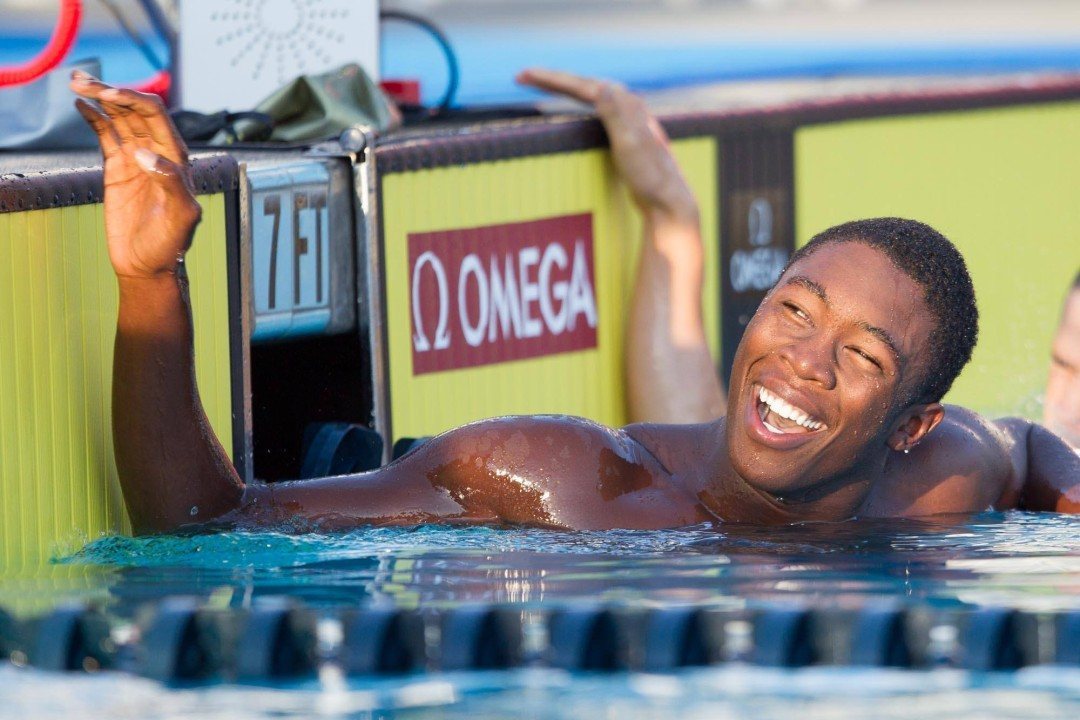 In the 200 breast, Reece Whitley will be making a run at his own 15-16 NAG Record. Archive photo via Tim Binning/TheSwimPictures.com

Scottsdale Aquatic Club’s Ryan Hoffer picked up top seed in the men’s 100 free with a 43.42 this morning. His finals swim is highly anticipated, as we wait to see what he has in store after throwing down a 41.23 at this meet last year.

Watch Regan Smith’s record-breaking performances, along with all the other championship finals, from Day Three of 2016 U.S. Winter Junior Championships-West in College Station, Texas.

We’re getting ready for day 4 finals at the 2016 U.S. Winter Junior Championships (East), which will be the final session of the meet. Follow along with us for a live recap of the events, including the 200 back, 100 free, 200 breast, 200 fly, and 400 free relay. We’ve got a couple of age group records on watch tonight, including the 15-16 boys NAG Record in the 100 free. Drew Kibler will look to take down the record, which currently belongs to Ryan Hoffer. In the 200 breast, Reece Whitley will be making a run at his own 15-16 NAG Record.

Marlins of Raleigh’s Madison Homovich added another medal to her total this weekend, this time winning gold in the 1650 free. Ohio State’s Molly Kowal made a late move to surpass 15-year-old Madelyn Donohoe at the finish, as the 2 swimmers rounded out the medals with silver and bronze respectively.

Baylor Swim Club’s Trey Freeman turned in the 7th fastest time in 15-16 age group history on the way to gold in the mile. Freeman dropped 20 seconds on the way to his first sub-15 minute swim. It took a 15:04.02 to make the podium, as Johannes Calloni and Ross Dant picked up the remaining podium places.

Nashville Aquatic Club’s Alex Walsh collected another gold tonight. She won the 200 back gold with a quick 1:53.70, followed by SwimMAC’s Julia Menkhaus. A slew of swimmers finished in the 1:56-range in the battle for bronze, but it was Marcella Maguire who got her hand to the wall for the podium spot.

Shortly after her mile victory, Madison Homovich returned to the pool for this race, taking 8th in the final.

Quest Swimming’s Clark Beach dropped a full 3 seconds off his best over the course of today, winning the men’s 200 back in 1:42.59. Behind him, Pleasantville Aquatics’ 15-year-old Destin Lasco clocked 1:44.02 for 2nd, moving up in the all-time rankings to establish himself as the 8th fastest 15-16 performer in history.

Rounding out the podium was Cardinal Aquatics’ Nicolas Albiero, who charged through the back half to out-touch Jacob Johnson (1:45.38) for bronze.

Gator Swim Club’s Isabel Ivey crushed the field into the 100 free, clocking her first sub-48 time ever and landing 3rd on the all time top list 10 for 15-16 girls. Ivey’s winning time of 47.88 was just .15 off the 15-16 NAG Record set by Simone Manuel in 2013. Carmel Swim Club’s 15-year-old Kelly Pash swam her way to a podium finish, taking 3rd behind Greater Tampa’s Morgan Tankersley.

In the B-final, 13-year-old Gretchen Walsh had a huge swim, winning the heat with a 49.48. Only Missy Franklin and Lia Neal were faster as 13 year olds.

The top 3 finishers in the 100 free all finished in the 43-range. Drew Kibler upheld his slight lead from start to finish, clocking a 43.14 to win the event. SwimMAC Carolina’s 15-year-old Jack Walker made his move on the 2nd 50 to outpace Zionsville Swim Club’s Jack Franzman as the 2 swimmers took silver and bronze respectively.

It took a sub-2:10 to medal in the women’s 200 breast final, with Brooke Forde blasting a 2:09.12 to pick up another gold. Nashville Aquatic Club’s 16-year-old Allison Raab and 15-year-old Ella Nelson both landed on the top 10 all time 15-16 performers list. Raab out-touched Nelson at the finish, clocking the 7th fastest time ever in their age group, while Nelson picked up bronze with the 8th fastest time ever in the age group.

Penn Charter Aquatic Club’s Reece Whitley dropped the mic in the 200 breast, setting a new 15-16 NAG Record on the way to gold with his 1:52.37. Whitley’s time was over a second faster than his previous NAG Record time of 1:53.66, and put him over 6 seconds ahead of the rest of the field.

Enfinity Aquatics’ Olivia Carter ran away with the 200 fly final, clocking a 54.61 split at the 100 on the way to her gold-winning 1:55.78. Lakeside Swim Team’s Brooke Forde swam to medals in back-to-back events, following up her 200 breast victory with a 200 fly silver. Also winning multiple medals was SwimMAC’s 200 back silver medalist Julia Menkhaus, who took 3rd in this event.

The 200 fly final came down to the touch, as the top 2 swimmers were separated by just a tenth. Nicolas Albiero returned to the pool, leading the race through the first 150 yards. In the final stretch, Spencer Carl was able to pull ahead for the win, out-touching Albiero by .11 at the wall.

Nashville Aquatic Club’s Alex Walsh gave her team the early lead with a 48.90 start, but Carmel Swim Club roared back for the gold with a trio of 49-range splits. Gator Swim Club picked up bronze after Isabel Ivey charged to a 47.79 on the anchor split.

The Bolles boys finished off the meet with another relay victory, with Willie Davis clocking a 44.19 leadoff split on the way to their 2:58.32 for gold. A close battle for 2nd saw Jake Sannem give Upper Dublin Aquatic Club the slight edge with his 43.88 on the 2nd leg. Despite a 42.53 anchor from Drew Kibler, Carmel Aquatic Club came up just short of the medals, and SwimMAC Carolina finished 3rd.

Reece Whitley with a huge NAG record. He’ll develop the speed for the 100 soon enough. For now I love seeing him drop in the IMs as well.

Worst announcer EVER!!!! Such a disappointment when you are watching the meet live and hear no names, no clubs, no times!!! Pathetic for such an awesome meet!!!!

It was SO painful. I was in the audience and had NO clue when anyone got a NAG. That should not ever happen! Horrible announcer. Just horrible.

Goodbye East. It was a fun meet to watch. I travel to the West meet now. With a true announcer. 🙂

The guy in the west seems to be familiar with some of the clubs there and is likes to get the crowd going.

The guy in the west seems to be familiar with some of the clubs there and is likes to get the crowd going.

The announcer doesn’t announce the results. No times. Nothing.

USA swimmings coverage is rotten including their lousy picture.. There is not even a running clock on the screen. They need to fix this.

Reece Whitley the giant coming up in the 200 breast
He didn’t look very happy yesterday after his 100 breast.
Let’s see if he can improve his NAG record of 1.53.66.