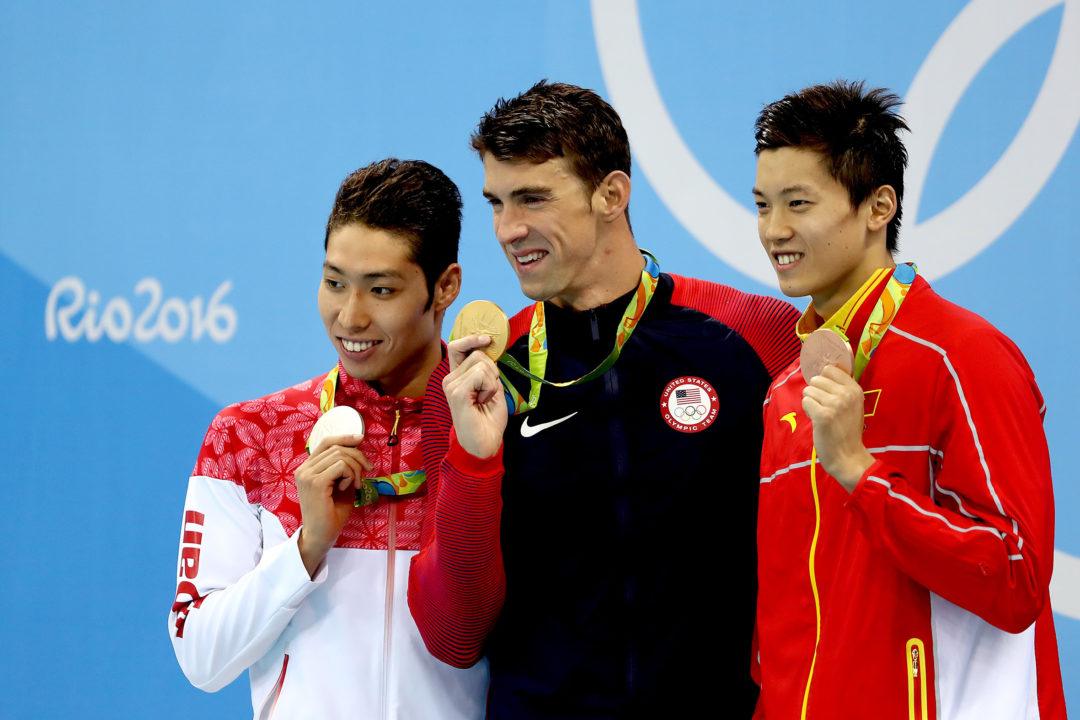 Kosuke Hagino (left) earned 3 medals at the 2016 Olympic Games, including the 400m IM gold, to help lay claim to the Swammy for Asian Male Swimmer of the Year. Archive photo via Mike Lewis/Ola Vista Photography

Despite being dealt a big blow in 2015 where a biking accident resulted in a broken elbow and Japanese swimmer Kosuke Hagino out of the 2015 FINA World Championships, the 22-year-old fierce competitor dedicated himself to a mindful and measured recovery. Hagino took his time, opting out of competition for the remainder of 2015 then quietly returned to the pool in January 2016.

Immediately upon his return, Hagino was up to form, racing his way to gold in the 200m IM and 400m IM events at the 2016 Kitajima Cup. His respective times of 1:57.73 and 4:11.38 held up within the top 3 in the world at the time, firing off a warning shot to IM competitors everywhere that his Olympic campaign kicked off on the right foot.

With American stalwarts Michael Phelps and Ryan Lochte out of the path of a possible 400m IM Olympic victory in Rio, Hagino took full advantage. He owned the grueling race from start to finish, ultimately notching the win in a time of 4:06.05, a new Asian Record.  The monstrous swim broke Hagino’s previous record of 4:07.61 set at the 2013 Japanese Championships and marked the stealthy athlete’s first individual win at either an Olympics or World Championships.

His impressive outing was followed by another battle in the sprint IM event, with Hagino chasing Phelps for the gold in the 200m. Phelps ran away with the gold, but Hagino scored the silver medal, producing a huge 1:56.61. With that performance, Hagino became the 7th fastest performer of all time in the event.

Although Hagino couldn’t make the magic happen in the enormously stacked men’s 200m freestyle final where he settled for 7th in 1:45.90, his lead-off on the Japanese 4x200m freestyle relay helped give them the edge for bronze in Rio. Hagino threw down an opening split of 1:45.34 to come in as 2nd fastest only behind USA’s Conor Dwyer.

Hagino underwent endoscopic surgery for his elbow and would be out of the water for a month beginning in September. He plans to return to competition in April 2016 at the Japanese National Championships.

How is Schooling not at least an honorable mention?

I think Seto has a solid year too.

Hey guys, just a total brain fart on our part. It’s been a long year to say the least :-).

It’s a tough call, because of how splashy Schooling’s win was, but on the balance, with Hagino getting a second medal, and two Asian Records, he’s still the fair choice, outweighing Schooling’s secondary results that would be his NCAA performance.

It’s a tough choice between a King and an Emperor. But Braden got them the right way round! Well done!

I love how Swimswam had these awards broken down to continents, but then once they got to North America, they chose to award them by country, USA and Canada. I wonder why Mexico was left out…

9
-5
Reply
bobo gigi
Reply to  Whatever

They have given the German awards too. And Germany is in Europe.

Why put a picture of hagino winning a silver? He did win gold in rio!!

Not sure if you actually understood the statement there buddy