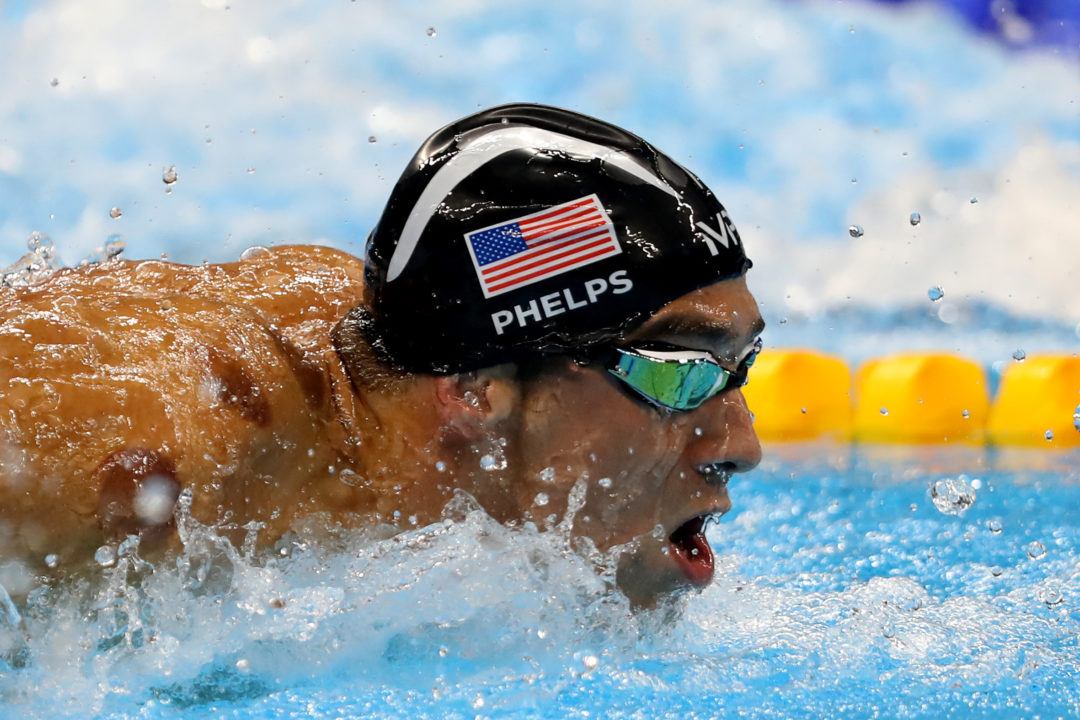 Finally Michael Phelps is up in the men's 100m butterfly. This event is arguably the toughest on his schedule for him. He wasn't remarkably fast at the US Olympic Trials but has shown throughout this meet that he's much better than he was just a few weeks ago. Current photo via Satiro Sodré/SSPress

After a fifth night of competition here in Rio at the 2016 Olympic Games, the action will once again turn to the heats where Michael Phelps is back, attempting to qualify for the 100m butterfly where he’s the three-time defending Olympic champion.

The first event on the docket is the men’s 50m freestyle. Defending Olympic champion Florent Manaudou of France is still the favorite four years after his stunning victory in London. Both Nathan Adrian and Anthony Ervin of the United States will be competitive in this race as well as some fresh talent from Australia.

The women’s 800m freestyle is all about Katie Ledecky, and anytime she swims there’s a world record watch. She broke her own world record in this event in January, leading many to believe she’ll break it here in Rio. The question is whether she’ll do it this morning or hold off until the final in order to do so.

Finally Michael Phelps is up in the men’s 100m butterfly. This event is arguably the toughest on his schedule for him. He wasn’t remarkably fast at the US Olympic Trials but has shown throughout this meet that he’s much better than he was just a few weeks ago.

Emily Seebohm of Australia will have the opportunity to try to redeem herself after missing the podium in the 100m backstroke. She’s the top seed in the 200 and if she can demonstrate the shape she was in at the Aussie trials she should be in the hunt for the gold.

In a head-to-head race in the final heat of the men’s 50m freestyle Andrii Govorov broke a Ukranian national record in order to take down defending Olympic champ Florent Manaudou of France with a time of 21.49.

That time for Govorov leads the charge heading into the semifinals tonight. Manaudou touched almost three-tenths behind him in 21.72 in order to take the fourth overall seed.

Taking the second and third seeds were Nathan Adrian and Anthony Ervin of the United States. Racing in the 10th heat, Adrian posted a time of 21.61 with Ervin clocking in just one one-hundredth behind in 21.62.

Both swimmers were part of the American gold medal winning 4×100 free relay, and Adrian picked up a bronze in the 100m freestyle last night.

Cameron McEvoy  was the only Australian to progress to the semifinals. He swam a time of 21.80 to qualify fifth behind Manaudou.

Stanto Condorelli of Canada who finished fourth in the 100m freestyle last night will also be in the semifinals, tying Great Britain’s Ben Proud for seventh overall with a time of 21.83.

Katie Ledecky has eliminated every record in the 800m freestyle that she could get her hands on spanning the world record, American record, world junior record, Pan Pacific Championships record, World Championships record, US age group records, and now the one she didn’t have: the Olympic record.

Ledecky swam a very easy 8:12.86 this morning in order to break Rebecca Addlington’s Olympic record of 8:14.10. That time gave her the top seed overall heading into tomorrow night’s final.

Breaking the Hungarian national record in the heats was Boglarka Kapas who is heading into the final as the second overall seed behind Ledecky. She was slightly faster than Great Britain’s Jazz Carlin this morning.

Carlin was the third swimmer to go under 8:20 this morning, highlighting how much this event has moved forward over the years. Her time of 8:19.67 puts her in a great position to medal in tonights final.

American Leah Smith, who looks to be a medal hopeful in the final, was an 8:21.43 to take the fourth seed ahead of Lotte Friis‘ 8:22.54. Jessica Ashwood of Australia, Sarah Kohler of Germany, and Mireia Belmonte Garcia of Spain make up the remaining qualifiers.

Michael Phelps of the United States is right in the mix to defend his three Olympic gold medals in the 100m butterfly, finishing fourth overall in 51.60 this morning to move forward to the semifinals.

Ahead of Phelps in the final heat was young up-and-comer Joseph Schooling of Singapore. Schooling rocketed off the start in order to drop the fastest times of the heats, clocking in at 51.41 at the wall.

Second to Schooling overall was Laszlo Cseh of Hungary who came from behind in order to win the fourth heat from the middle lane. Cseh managed a 51.52 this morning.

In his first 100m butterfly Olympic appearance Tom Shields of the United States dropped a very swift 51.58 to take down South Africa’s Chad le Clos and qualify himself third overall ahead of Phelps.

Katinka Hosszu threw down a monster time of 2:06.09 to take the top seed heading into semifinals and beat her previous personal best time. That time broke her own Hungarian national record.

While Hosszu was well ahead of the remainder of the field, Canada’s Hilary Caldwell was the closest to her and only other swimmer this morning to go under 2:08. Caldwell, who’s a world championship bronze medallist in this event,  rocked a 2:07.40 at the touch to finish behind Hosszu in their heat and take second overall.

Over a second behind Caldwell was Maya DiRado of the United States, taking things out in a controlled 2:08.60 for third overall. The top three times all came from heat number three.

Both the defending Olympic champion Missy Franklin and the defending world champion Emily Seebohm moved forward to the second round, however neither of them posted top eight times. Seebohm was 10th in 2:09.00 while Franklin claimed the 11th spot in 2:09.36.

thumbs up if you’re excited for tonight’s race’s?

I think that it’s really sickening how the media has been referencing the accomplishments of women in these Olympics with respect to the men in their lives.

Specifically, the Icelandic swimmers. To that end, I think we need to stand up for Eyglo Gustafsdottir and Hrafnhildur Luthersdottir. Maybe instead we should be referring to their dads as “Eyglosfadder” and “Hrafnhildursfadder.”

What an oddly specific attempt at a joke.

Schooling said: “It felt like a morning swim, relaxed, easy… I feel Okay, not really tired, just ready for tonight and focused.”

Schooling will be an huge threat to the experienced names. Hope he medal.

I revise my predictions

What is your Breaststroker like? Only Joking, I mean the backstroke.

He just finished second in the 200 Free. That’s pretty impressive.

There wasn’t a ton of pressure/expectations on him in the 200fr though. In 200fly, as defending Olympic champ and being the guy that was getting in Phelps’ face, he had a lot of pressure to produce a big swim to not end up looking like a huge fool.

Any time Australian fans get disappointed all they have to do is remember Kyle Chalmers. So mans I missed his swim last night. The dude is the real Thorpedo successor.