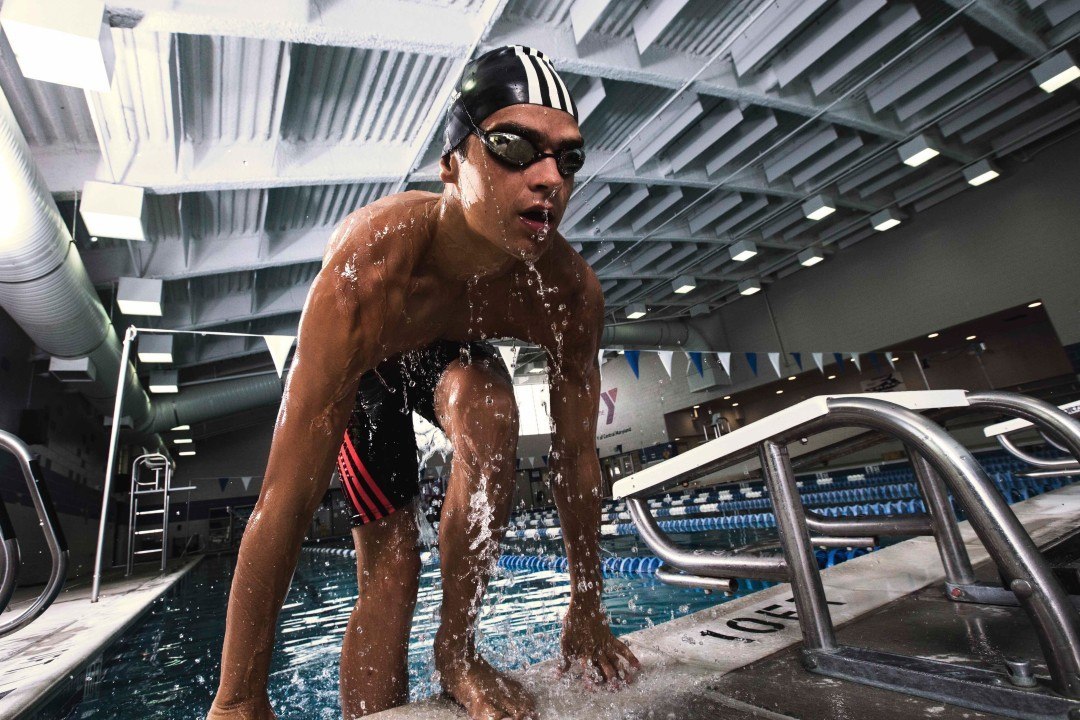 Michael Andrew is set to swim an incredible eight individual events at the World Junior Championships set to begin on Tuesday, August 25th. Archive photo via (courtesy of adidas swim)

With the Opening Ceremony of the 5th FINA World Junior Swimming Championships set to get underway on Tuesday, August 25th, the psych sheets have now been released in anticipation.

As a refresher, the competition runs from August 25th-30th in Singapore, with over 500 swimmers between the ages of 14 and 18 set to compete.  The specific age guidelines per gender are as follows:

Each nation may enter up to two swimmers per individual event and one relay team per event, as long as the athletes achieved the time standards between the qualifying period of May 15, 2014 through August 15, 2015.

Russian powerhouse Arina Openysheva is scheduled to compete in the 100m, 200m and 400m freestyle events, where she holds the top seed in both the 100m and 200m distances.  Openysheva rocked the inaugural European Games in Baku this past June, finishing up the competition with an incredible 7 medals.  Her individual wins came in the 200m and 400m freestyle races, so look for her to charge to the top of the podium on both of those events. Openysheva is also a threat in the 100m sprint as well, however, as she raked in a silver in Baku as runner-up to the Netherlands’ young sprinting sensation Merrit Steenbergen.

Openysheva will certainly have her hands full with Japan’s Rikako Ikee, however, as Ikee holds the 2nd seed in the women’s 100m free just three tenths of a second behind the Russian.  Another Japanese swimmer, Sachi Mochida, holds the runner-up seed in the women’s 200m freestyle, with an entry time of 1:58.69 to Openysheva’s 1:58.22.  The highest-ranked U.S. swimmers in the women’s 100m freestyle are Stanzi Moseley (55.69) and Lauren Pitzer (55.83), entering in 11th and 12th, with Hannah Cox ranked 4th in the 200m free event with her time of 1:59.29.

Another woman to watch is Turkish standout Viktoria Zeynep Gunes, a force on the breaststroke scene.  Gunes holds the top seed in the 200m breaststroke event, and is ranked 2nd in both the 50m and 100m distances.  Gunes is also ranked number one in the 200m IM event with her time of 2:11.46.

American Sierra Schmidt comes into Singapore as the top seed across two events, where she leads the incoming field in the 800m freestyle (8:27.54) and 1500m freestyle (16:23.75). Schmidt is also seeded 3rd in the 500m freestyle behind Aussie Tamsin Cook and Openysheva.

Other U.S. swimmers gunning for World Junior titles include Cassidy Bayer and Claire Adams.  For her part, Adams ranks highest in the 100m backstroke event, holding the only sub-minute time in the event from her swift 59.58 clocking at U.S. Nationals.  Adams is also ready to go in the women’s 50m backstroke, although she comes in as the 12th seed in the event.

In the 200m freestyle, Kurle will need to get past incoming number one, Maxime Rooney, the American youngster who amazed swim fans everywhere with his powerful swimming at U.S. Nationals.  Rooney holds the top seed in the 200m freestyle by well over a second (1:47.10) and also sits 4th in the rankings in the 100m freestyle (49.36).

Another prime time player to watch in the men’s freestyle events is Kyle Chalmers from Australia.  Chalmers actually competed as part of Australia’s 4x100m medley and 4x100m freestyle prelim relays at the 2015 FINA World Championships, so he is coming in with a slight bit of big-time meet experience in his veins.  In Singapore, Chalmers will be the one others are looking to beat in both the 50m freestyle and 100m freestyle events, where he holds the top times in 22.33 and 48.69, respectively.  In the 200m freestyle, Chalmers will also be a major threat, sitting fourth in the rankings.

The men’s breaststroke events will hold some of the fiercest battles of the meet, with Russian Anton Chupkov trying to hold off Americans Michael Andrew and Reece Whitley.  In the 100m breaststroke race, Chupkov holds the advantage over Andrew by just .03 of a second, 1:00.65 to 1:00.68.  EAch will no doubt be aiming for a new World Junior record as they try to get to the wall first.  Whitley, ranked 4th with is time of 1:01.06, could also throw down a mega swim to challenge for gold.

Chupkov holds the top seed in the 200m breaststroke as well, holding over a second advantage over Whitely in that event.  9th-seeded American Chandler Bray will also fight to be in the mix to get his name on the board.  And then Chupkov and Andrew will battle again in the 50m sprint breaststroke, although Lithuania’s Andrius Sidlausakas holds the top spot coming into the meet, where Chupkov is ranked 4th to Andrew’s 9th position coming in to the meet.

Overall, Michael Andrew will be swimming a stacked individual schedule, which includes a whopping eight individual events.  We will see Andrew on the blocks in the 50m/100m backstroke, 50m/100m breaststroke, 50m/100m butterfly, as well as the 200m IM and 50m freestyle events….plus relays.

Looking forward to seeing Taylor Ruck breakout on the international stage. I think she’ll be deadly on both the 200 free and back, in particular.

Penny Oleksiak as well. Canada has some serious talent now!

And hopefully with Brittany Maclean back to her best.

How many people will read this and think ‘who the heck is Shane Williams?’

As a rugby fan I know Shane Williams the Welsh player who is also small. 🙂

Also really looking forward to seeing what Antionette Neamt can do, she seems to be the name at the front of a good crop of talent for Ireland.

Overall, Japan and Russia look very strong in the junior ranks for the last few years. Especially on the girl’s side. Their medley relays will not be easy to beat.

The US team is looking very good on paper. I just wonder how many Americans will be able to at least repeat their times from early August. Some of them have swum a lot in the past few weeks. I see Bayer, Adams, Schmidt and Kopenski as strong medal contenders on the girl’s side. Rooney, Andrew,… Read more »

Will grieshop make a huge drop? I see Almeida going 4:13!

I watched 14 year old Sean Grieshop come from nowhere (El Paso) and win all 7 events he entered at the Texas AG Champs. I would not bet against him.

becase Texas ag champs and junior worlds are so comparable

To a psychodad, you are correct.

When at TAGS sometime ago I wondered if I was at the National Age Group Championship. The swimmer might perform well again if people don’t feed nonsense about tapering again is hard or that there’d is any difference. Just get out there and swim. The heck with natsayers.

Psycho.. Brandonn is seeded 2,6 seconds almost ahead of Grieshop.. that is a big drop for 400 IM..

And Pakhamov will swim the 100 fly.. seeded a lot ahead of the field.. Got surprised by the Japanese freestyler/flyer girl, never heard of her before..