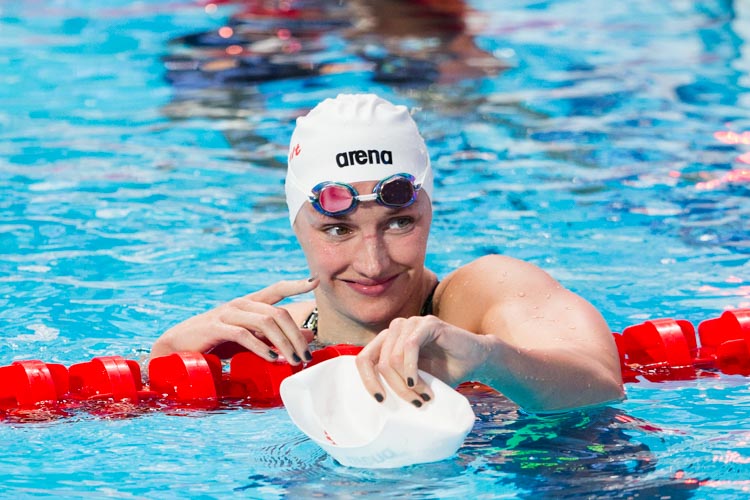 Katinka Hosszu has already had a phenomenal Championships so far, and she will compete in one of her signature races, the 200 fly, this morning. Current photo via Tim Binning/TheSwimPictures.com

After a sterling start to the FINA World Championships, Katinka Hosszu will compete in one of her strongest events, the 200 Fly. Hosszu is the European record holder in this event, and she’s been phenomenal every time she’s jumped into the pool this week. Fresh off a world record in the 200 IM on Monday night and a strong performance in the 200 free semis last night, Hosszu is poised to put on a show once more to start off Day 4.

Also competing today will be Australia’s Emily Seebohm in the 50 back, and given how good she was in the 100 back last night, she should be considered a heavy favorite for the event title. However, she will face some stiff competition from Brazil’s Etiene Medeiros and China’s Fu Yuanhui along the way. Don’t count out Denmark’s Mie Nielsen or USA’s Rachel Bootsma either.

We will also get some more sprint action in the Men’s 100 free as heavyweights Vladimir Morozov, Cameron McEvoy, and Nathan Adrian all square off. On the first night of competition, Morozov was the sole swimmer amongst all the participants in the 4×100 Freestyle Relay to break 47 seconds on any leg of the relay (46.95), so it may be worthwhile to pay special attention to see if he paces the field this morning. Of course, we also cannot forget about China’s Ning Zetao, the Asian Record holder in this event. Notably, France’s Florent Manaudou and Brazil’s Cesar Cielo, the world record holder in this event, are both not competing in the 100 free individually at these Championships.

For the final individual event of the prelims session, we will also get to see Ryan Lochte and Conor Dwyer from the United States tackle the 200 IM against a very tight field. Both Daiya Seto of Japan and Laszlo Cseh of Hungary have performed admirably in the earlier rounds of the 200 fly, and given how painful Lochte described his 200 freestyle final last night to be, we may not see him jump too far ahead of the field in the morning.

Finally, we will see the Mixed 4×100 medley relay contested at the long course variant of the World Championships for the first time.

China’s Fu Yuanhui posted the fastest time of the morning with her 27.66 out of Heat 4. However, she has a very slim lead over the rest of the pack, with the top 8 swimmers being separated by less than four-tenths of a second.

100 Backstroke champ Emily Seebohm did enough to win her heat, and will still be in the middle of the pool for the semifinals tonight. Her prelims time of 27.75 was just behind Brazil’s Etiene Medeiros 27.74 from the final heat, and the semifinals should repeat as a tight race across the board.

Notably, the United States’ Rachel Bootsma was a no-show in arguably her best event. No word as of yet as to why she was scratched this morning.

Australia’s Cameron McEvoy continued to swim controlled in all of his prelim swims with his effort this morning, and his 48.33 has him sitting 2nd behind Zetao entering the semifinal rounds.

Nathan Adrian of the United States got his first swim of the meet with a 48.61 out of the final heat, and he is currently sitting in 7th. Though he is a half-second behind the leader, Adrian looked optimistic and satisfied with his start to the Championships.

Yufei Zhang of China looked swift and smooth this morning as she led the heats of the women’s 200m fly with a new junior world record time of 2:06.92.

The young flyer took down American Katie McLaughlin’s 2:07.08 record from last year’s Pan Pacific Championships. McLaughlin ended up coming close to her time this morning, taking the second seed overall behind Zhang with a 2:07.32 performance.

Hungarian Liliana Szilagyi managed to be the only other swimmer to stick with the two leaders, putting up a 2:07.46 in order to qualify third. She will be joined in the semifinals by fellow Hungarian Katinka Hosszu who managed to qualify sixth with a 2:08.07.

The Americans will be represented strongly in the semifinals as well. Cammile Adams dropped an impressive 2:07.96 to qualify fourth ahead of Japan’s Natsumi Hoshi.

Other high profile swimmers such as Madeline Groves of Australia, Audrey Lacroix of Canada, and Hannah Miley of Great Britain made it through to tonight’s semifinals.

After finishing fourth in the 200m freestyle on day three, Ryan Lochte looked smooth and comfortable in the heats of the men’s 200m IM. Taking the top seed in 1:57.90, Lochte didn’t look like he took a hard stroke the whole race.

It looked as though he took it easier on the back and freestyle legs, however is breaststroke leg was extremely impressive. Lochte had the fastest breaststroke leg of the heats with a 32.83 split. The second fastest was 33.41 by Dan Wallace, however the majority of swimmers didn’t even crack 34-seconds.

Continuing a Florida Gators domination, Great Britain’s Dan Wallace took the second seed overall behind Lochte in a new Scottish national record of 1:58.28. That time just bettered his 1:58.72 record from 2014.

Tonight’s semifinals should see some shift changes as plenty of talent is featured in the lower half of the top 16. Australia’s Thomas Fraser-Holmes was 13th this morning and is known to have an extremely strong IM. Roberto Pavoni of Great Britain, Thiago Pereira of Brazil, and Daiya Seto of Japan all finished below the top six and could be major factors in the semifinals.

After a disappointing start to these championships the Americans look to be getting right back in the mix of things especially after breaking the mixed 4x100m medley relay world record in prelims.

The team of Ryan Murphy, Kevin Cordes, Kendyl Stewart, and Lia Neal collectively put up a time of 3:42.33 to take just under a second off the world record.

The most impressive split came from Ryan Murphy who put up a time that would have won the individual 100m backstroke earlier in the meet. His 52.18 marks the fifth fastest performance ever in the 100 back and makes him the fourth fastest performer of all time in the event.

Great Britain took the second seed ahead of Germany and Russia.

James Magnussen isn’t in the 100 free…

To me, the biggest surprise of these world champs so far is Laszlo Cseh. For being such an outstanding middistance swimmer so long, it’s eye opening to see he can swim all the way down to a 50. Especially how he came up at Manadou’s hip at the breakout but was gaining on the field ’til the end. This makes me very excited for his 200 and the 100!!!

Does anyone know if Universal Sports has a live stream for today?