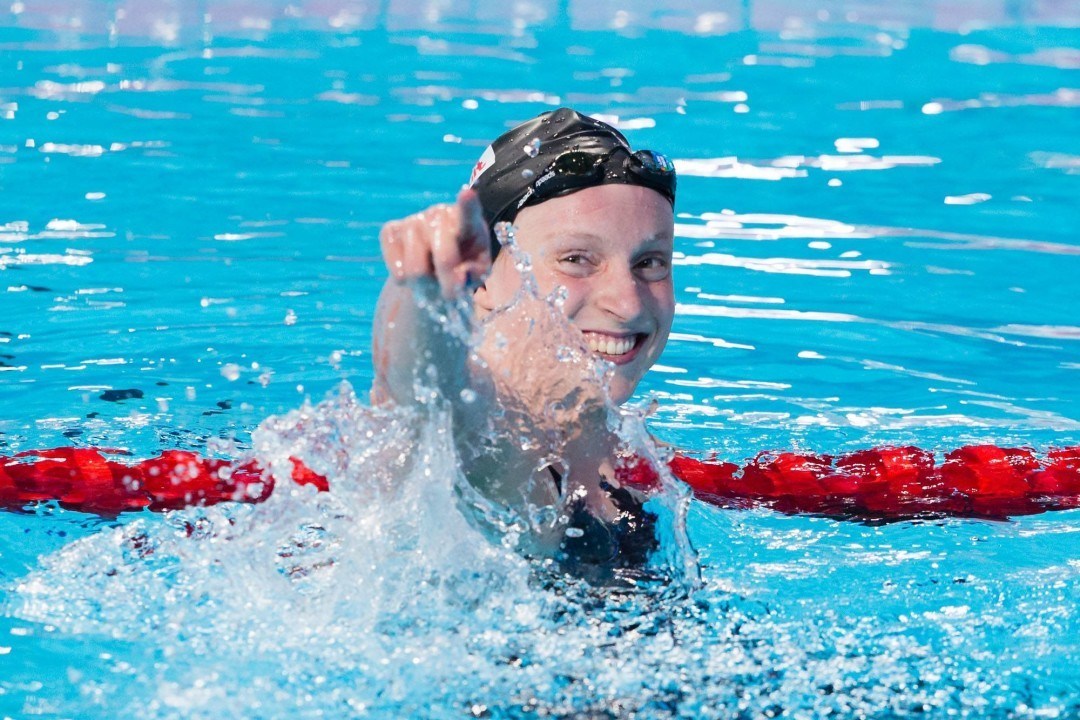 4 individual gold medals from Katie Ledecky made up half of the American victories in Kazan, Russia. Current photo via Tim Binning/TheSwimPictures.com

90% of respondents in our latest A3 pool believe that USA Swimming made the wrong decision to select the 2015 World Championship team in 2014 instead of 2015.

The question has swirled after Team USA had a historically-bad performance at the 2015 World Aquatics Championships two weeks ago in Kazan, Russia. There, the American men won just 2 gold medals and the women just 5. For the men, that’s the lowest total in the history of the long course World Championships, and the combined 7 gold medals (without mixed relays) is the lowest combined total since 1994.

There were many swims and swimmers who wound up outperforming the World Championship team at other meets, including the U.S. National Championships and the Pan American Games. While there was a difference in the level of pressure at those meets, and the fact that Nationals and Pan Ams didn’t include semi-finals in races 200 meters and shorter, this was still an abnormally low output for the American World Championship team.

With their response to our poll, SwimSwam’s readership (which historically has been made up of about two-thirds American and one-third international readers) believes that the selection was made too early. This is not the first time where USA Swimming has used this methodology, but in 2011, the year before the 2012 Olympic Games, it resulted in 16 gold medals: historically one of the more successful meets that the Americans had.

The suspension of Michael Phelps, and his subsequent performance at Nationals, is another caveat to this, as his suspension was not necessarily caused by the team being chosen last year, but were the team not already selected in 2014, hypothetically he might not have lost his spot on the World Championships team (though that’s purely speculative in one direction or another).

Despite the results, the Americans have maintained their confidence heading toward 2016, with several members of the team, including Olympic champions Missy Franklin and Tyler Clary, speaking out publicly that they’re not concerned by the results.

The theory espoused by USA Swimming for this meet is that it gives athletes a full cycle to train for the World Championships without having to double taper, which they view as important heading into the Olympic year. With multiple teams, including the World University Games and Pan Am Games, racing this summer and selected in 2014, a majority of the anticipated Olympic team will have gotten that full-cycle opportunity at one meet or another.

The poll results, however, show that fans aren’t ready to write off World Championship meets as secondary events as easily as they used to.

Sure America didn’t do that well at Worlds (except Ledecky!!!) but they had NO CHOICE but to pick the team last year because, news flash, world champs were before nationals this year. They had to pick the team last year because they didn’t have any “qualifying meets” between 2014 nationals and 2015 World Championships. Let’s take a breath and calm down and focus on what’s really important here, Ryan Lochte is gorgeous.

I think the difference between this year and 2011 was the youngsters. Most people how would have been better choices then the team present were young so they weren’t selected. In 2011 the team was very experienced so they were successful. The pool they selected from were just different, and one was better.

The new talent will reinvigorate this team by next summer. I don’t doubt USA for a second

Does anyone else here wish they’d go back to the every 4 years format? I think the WC’s were a more meaningful meet when a) it was less frequent and b) there was a bit of breathing room from the Olympics.

Actually, this comment also makes a lot of sense in terms of the costs involved for the host-city to stage the event. Wasn’t an upcoming Worlds recently cancelled because the prospective Mexican host city realized they couldn’t afford it?

I’ve noted that your main swimming website rival SW has just posted a very original question on their homepage:
was selecting the US world championship team last year too early?
Bunch of copiers! 😆

The year prior to the Olympics should and will be the biggest work year for many of these athletes .

I heard Frank Busch, the US national team director, after the meet in interview, and he looked very pleased with the results overall 😯 and not ready to change that qualification system every 4 years.

Why doesn’t USA swimming just select the World champs team based on a lottery? They would have a better shot of picking a winner.