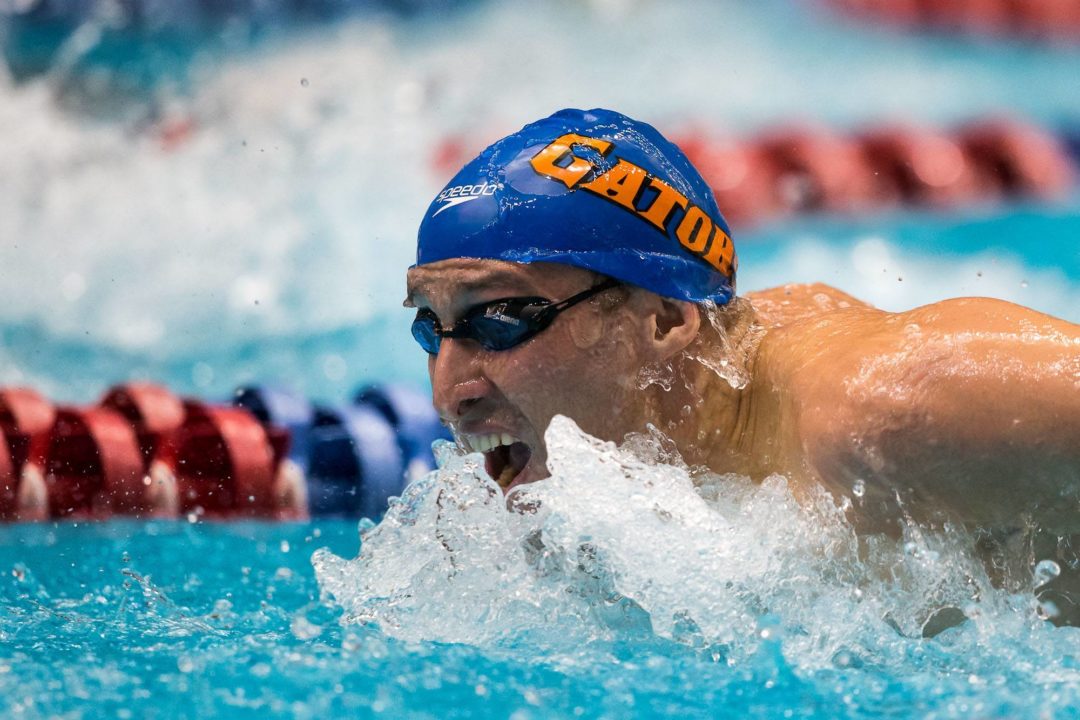 This year, the meet moves on to Athens, Georgia from February 18th-22nd, and the Florida men look even better this season with some of their freshmen making immediate impacts already, and with them in contention to win as many as 5-or-6 individual NCAA titles.

Their relays have come together nicely as well, with Corey Main showing a previously-unknown level of freestyle ability.

But it’s not so simple to just etch the Gators’ name into the trophy as champions just quite yet. That’s because the whole conference has gotten better. That’s partially because there were very few graduations, but it’s also partially because there are so many high-impact freshman, and so many more swimmers coming from places like Alabama and South Carolina who will have an A-final impact. The A&M men, though they graduated their best swimmer, have caught first a little bit too; the Georgia men are building off of an incredible summer; even the diving has gotten better.

As an indicator of how few graduations there were from the conference, take a look at the 200 medley relay, which is the meet’s first swimming event. There were 10 relays entered from 10 schools in the conference that sponsor men’s swimming. In those 10 relays last year, there were only 10 seniors. No individual relay had more than two seniors. The #3-#5 relays (Florida-Georgia-Missouri) didn’t graduate anybody.

We’ll dig into more specific races later, but that’s just a sampling of how strong the conference should be this year.

Since the SEC is only in their 2nd year of their new 5-day schedule, that they began last year, here’s a reminder of which races fall on which days. That should absolutely affect the outcome of the meet, especially for anybody who is attempting the 100 fly/100 back double – those races are now well spaced out.

Alabama – BJ Hornikel (senior freestyler), Kristian Gkolomeev (freshman sprinter), Anton McKee (freshman breaststroker), Connor Oslin (freshman backstroker) – The number of freshmen on this list, and who lead Alabama in different events, is a sign of how well Dennis Pursley did in his first year of recruiting by hitting the international markets.

Kentucky – Lucas Gerotto (junior butterflier), Chris Lott (senior sprinter), Eric Bruck (senior sprinter), Greg Ferrucci (senior diver) – The Wildcats are training under new head coach Lars Jorgensen, and the really exciting thing to watch will be how much success Eric Bruck can have; he was a part of the group that saw off the Clemson program with some really impressive results in those last few years.

400 Free Relay – This was a great race last year, with both Auburn and Florida splitting 2:50’s for a 1-2 finish at SEC’s. This year’s race should be even better; Auburn has to replace Kyle Owens, and has done so quite well with super sprint freshman Kyle Darmody. Florida has found a new sprinter in Corey Main, who last year was more of a backstroker, which makes them potential NCAA Champions after not graduating anybody. Auburn currently ranks #4 in the country, and Florida #7 in the event. A surprise Missouri team isn’t far behind them at #9 (just half-a-second slower than Florida), with Georgia, Texas A&M, and Alabama bringing a lot of quality as well. It’s hard to pick against Florida with how well they’ve swum this year; a lot of their guys aren’t sprint freestylers, but they sure do sprint freestyle. Auburn is still “sprint U” and have the country’s best in Marcelo Chierighini, which is an ace that nobody in the country can match.

400 IM – There could be a little built up tension behind this 400 IM. Last year, Georgia’s Chase Kalisz, then a freshman, was the NCAA Champion in the event. The man who might have beaten him was Florida’s Sebastien Rousseau, but he was DQ’ed in prelims. Rousseau is a senior and is back for vengeance, but Kalisz has taken his versatility to a new level this season. If there’s a can’t-miss race at this meet, it’s the 400 IM. Of course, last year, Rousseau didn’t swim this race at SEC’s, and since the conference doesn’t force its coaches to cut before psych sheets come out, we won’t know until later in the meet if this battle is actually going to happen. Points-wise, there’s certainly more logical places to put him with the Gators’ depth in the 400 IM.

500 Free – Everyone knew Georgia sophomore Matias Koski was going to be good last year when he was a freshman. His SEC Championship, though, in the 500 free early in the meet caught us off guard. He dropped five seconds from prelims to win the title by a full second over some great swimmers: South Carolina’s Michael Flach and Auburn’s Zane Grothe. Koski had other good swims at the meet, but none that were nearly to the level of that one finals 500 that he popped. Flach and Grothe are both seniors this year, and Florida’s Andrea D’Arrigo, another freshman, could be in the mix, as could Missouri’s Eegan Groome. There’s already been 8 guys in the conference under 4:20 in the 500 representing four schools, and that doesn’t even include Flach (he’s the 9th seed at 4:21).

50 Free – Because this is the SEC! And the SEC is about SPEED! Marcelo Chierighini from Auburn is the defending champ, and wants to leave his legacy. Florida’s Brad DeBorde matched Chierighini to the turn, but came up just a hair short coming home. If Kyle Troskot or the freshman Luke Percy can get in on this one, that would be even better, but DeBorde vs. Chierighini is worth the price of a ticket alone.

Don’t see a whole lot changing from last year’s final standings in this one. The only thing that might happen is with so many Florida NCAA qualifiers already, the Gators could really slog their way through this meet and focus on nationals. However, Florida’s “slogging through training” the last couple of years has been better than it once was; much better, so that might not even close the 200 point gap.

Everything through the 3-4-5 ranks should tighten up considerably, with Missouri looking deeper, and Tennessee developing the beginnings of a strong nucleus. However, Georgia is too deep in their 10-17 spots in the roster and should hold on to 3rd.

The LSU men got a big morale-boosting win in their dual meet against Texas A&M, and so they could run as high as 6th at this meet if they fire on all cylinders.

Alabama didn’t graduate a whole lot of points, and with the emergence of freshmen Connor Oslin, Kristian Gkolomeev, and Anton McKee, their relays look really good.

Remember that in the SEC, finals are scored through the C heat, which means that there’s a minimum of 22 points awarded for finishers in the top 8. So, when looking at last year’s scoring, note that the gaps between teams aren’t as big as they appear.

I’m having a hard time finding the 500 freestyler “Andrew D’Arrigo” but I assume it’s the same person as Mitch or “Andrea” D’Arrigo. Is this correct?

Marwan El Kamash is not a diver