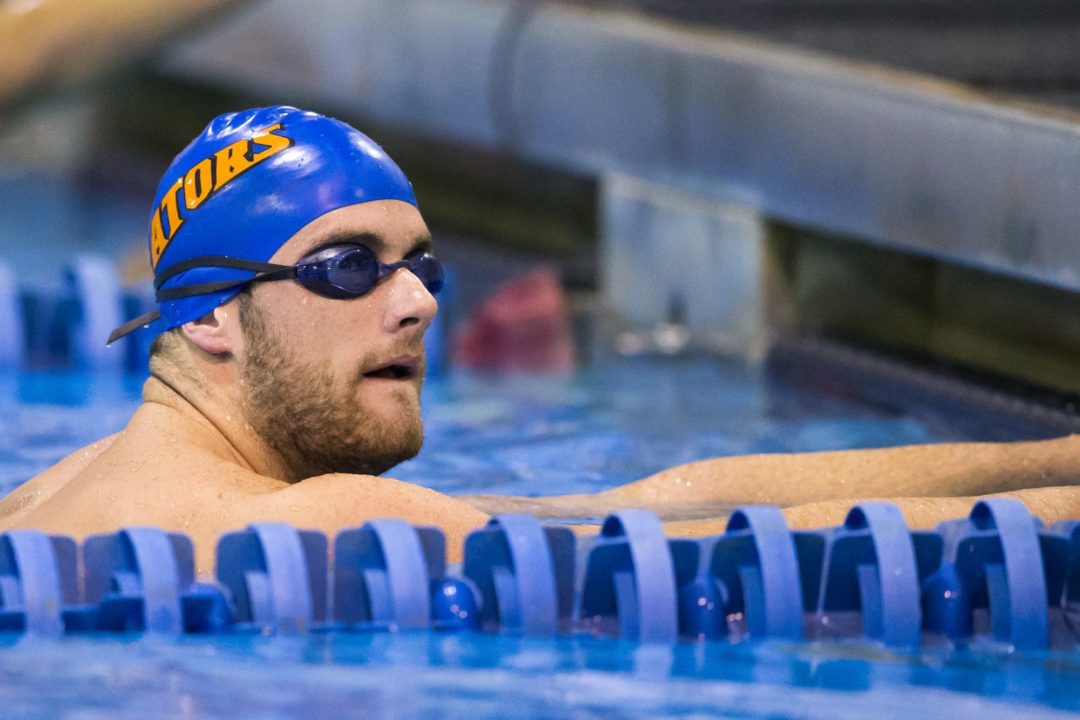 Florida's Brad deBorde, beard and all, has looked unstoppable at this week's SEC Championships. He and Auburn's Marcelo Chierigihini will have two more matchups on Saturday. Current photo via Tim Binning/TheSwimPictures.com

Saturday is the final day of the 2014 SEC Championships, and while it’s looking highly likely that the Georgia women and the Florida men are going to defend their team crowns, there’s still plenty of great individual races left at this meet, including the men’s 100 free between Brad deBorde of Florida and Marcelo Chierighini of Auburn.

The meet-closing 400 free relay on Saturday night should be a spectacular affair as well.

In total, the events on the day will be the 100 freestyles, the 200 backstrokes, the 200 breaststrokes, women’s platform diving, and in timed finals the 1650 freestyles and 400 free relays.

The women’s 100 free prelims were incredibly fast on Saturday, even with the top two finishers from last year’s meet graduating.

This year, Florida sophomore Natalie Hinds took the top seed in 47.75, and Georgia senior Shannon Vreeland is the 2nd seed in 47.80.

Beyond them, the depth in this race is impressive. Two more Georgia swimmers are in the top four, with Maddie Locus sitting 3rd in 48.06 and Olivia Smoliga sitting 4th in 48.21.

Texas A&M’s Lili Ibanez is the 5th seed in 48.22, Lindsay Gendron is the 6th seed in 48.28, Anna Patterson is the 7th seed in 48.29, and Tennessee’s Faith Johnson is the 8th seed in 48.41. That’s just incredible, and shows that if these swimmers can repeat those times, just how much it’s going to take to score in NCAA’s in this race.

Georgia’s Chantal van Landeghem was again the victim of the conference’s incredible sprint depth, and is the 9th seed, as she was in the 50, in 48.68.

Rolling down through the heats, it took a 49.02 to make the B Final (Auburn – Haley Krakoski), which is a huge jump even from last year, where it took only a 49.4.

Auburn needed something really special in the men’s 100 free to have a chance at the team title, and with the depth of the SEC, there was too much quality for that to happen.

The focus now becomes on wrapping up quality individual swims and NCAA qualifications, and Auburn’s Marcelo Chierighini had one of those in prelims with a 42.10 for the top seed.

The second Auburn tiger, and another freshman, Kyle Darmody is the 4th seed, and a second Alabama swimmer, Kristian Gkolomeev, is the 5th seed in 42.91.

Meanwhile, Florida’s top sprinter (and the top sprinter at this meet so far) Brad deBorde was sitting and watching times go on the board, and was perhaps a victim of being in the first circle-seeded heat, and a bit of a slow heat at that, but his 42.96 got him a spot in finals, which is all he really needed. He’s the 6th seed, which will put him in lane 7 tonight.

Throughout her career, Georgia freshman Rachel Zilinskas has always been a big-time taper swimmer. She’s used to coming down big for her  one-or-two championship meets a year in times, and rather than fighting that, the Georgia coaches have cultivated that this season.

We’re seeing the big payoff this week, as Zilinskas has had another breakout swim. This time, it’s for the top seed in the 200 backstroke with a 1:52.70, which is her lifetime best by almost four seconds in that event and moves her into the top 10 in the country this year.

Her ability to carry over her success to NCAA’s is going to be a key to whether or not the Bulldogs can repeat as champions. If she can get north of 20 points individually, especially in events where they’re not great but Cal is like this 200 back, that will have a significant impact.

Former (but not defending) NCAA Champion Elizabeth Beisel is the 2nd seed in 1:53.25, and her Florida teammate Sinead Russell is the 3rd seed in 1:53.68.

Georgia’s Jordan Mattern and Auburn’s Jillian Vitarius tied for the 4th seed in 1:54.00, and Texas A&M’s Melanie McClure was 6th in 1:54.17 0 a big final and a lifetime best for her that will be important for A&M’s battle with Florida for 2nd place.

The Tennessee men are putting together a great final day of the SEC Championships, and sophomore Sean Lehane continued that trend with a blazing 200 backstroke to take the top seed in 1:39.96 – his lifetime best by well over a second, and the top seed by well over two seconds.

A pair of Florida Gators took the next two spots behind him, with Carlos Omana and Corey Main each going 1:42.2’s, and Georgia’s Ty Stewart going 1:42.3.

Auburn’s Joe Patching, who was the top seed coming into this race, finished only 12th in prelims in 1:44.09. It’s looked like he’s been mostly training through this meet, though, which should set him up for a good performance at NCAA’s.

Texas A&M’s Breeja Larson put up another incredible morning swim, which will put on another NCAA Record watch on Saturday evening. She was a 2:04.92 in the 100 breaststroke (out in 1:00.6) to cruise to the top seed and break her own SEC Championship Record set last season at 2:05.71. She’s still half-a-second away from the mid-season NCAA Record she set last year, but she looks like she’s got her best chance yet in her senior season to finally take the 100/200 double at NCAA’s.

This is a really unique situation, because Larson has taken women’s breaststroking to such a crazy level, that swimmers going 2:07’s and 2:08’s, which are really, really good times at the college level, aren’t even in the title picture.

The men’s 200 breaststroke final sets up very similarly to the way the men’s 100 breaststroke final did on Friday. Alabama freshman Anton McKee is the top seed in 1:53.56, but Georgia junior Nic Fink is just behind in 1:53.62. On Friday, that played out well for Fink, but this 200 could be a different story: it’s McKee’s better of the two events, and Fink’s weaker of the two events (only in relative terms, of course).

South Carolina’s Alex Vance had a huge breakout to go 1:56.61 and tie with Missouri’s Igor Kozlovskij for the 5th seed. That’s Vance’s lifetime best by almost three seconds, with his previous best time coming when he was in high school (he’s now a junior).

The Florida men have all-but-sealed up the title, as it would take multiple DQ’s tonight for Auburn to catch them. It looks like Auburn will have enough of a gap to hold off Georgia for 2nd as well, so expect Florida-Auburn-Georgia to be your men’s 1-2-3.

The Georgia women couldn’t be derailed even with a lot of DQ’s, so they’ll be the women’s champions. Florida and Texas A&M will be close for 2nd; the Aggies have a notable edge (1 A finalist, 2 B finalists) based on the prelims races, plus a 112-point margin coming into the session, but Florida could erase that in a hurry with the 1650 free if things go well for them. Still, the smart money is on the Aggies.

Early heats of the 1650 free will begin around 2:30 Eastern time, with finals starting at 6.

When an athlete is an outlier and likely to compete in an event unchallenged, they are essentially swimming a time trial. Therefore, since they’re going after a ‘best time.’ And that best time can happen in prelims or in finals. So that swimmer goes after it both in the prelim and in the final. With little or no perceived risk of getting bumped to second in finals, he/she goes for the time in prelims and finals. With the risk of swimming fast in the morning and having a bit of a let down in finals. E.g. KLedecky goes all out in a.m. because there will be little or no challenge expected in finals. Unless there’s a MFranklin in the building… Read more »

Where has Heather Lundstrom been for Tennessee?

Did Kalisz scratch? Wasn’t he signed up to swim the 200 breast?

you can only swim 3 individual events and he swam 2,4IM’s and 2fly. you can enter as many events as you want but only swim 3

Great meet for both Georgia Men and Women! Dawg parents are loud and proud of their swimmers. Women showing their depth and training hard to try to repeat as NCAA Champs. Go Dawgs…Sick Em…woof woof woof

Georgia’s women have solidified their position as the favorite going into NCAA’s. With the freshman backstrokers of Smoliga and now Zilinskas, I believe that have the complementary points to beat the Pac 12 teams. Their freestylers are incredibly deep at all distances and Harrington and Margalis have been swimming lights out. Compliments to their staff on stepping it up after last year’s winning season.

bobo – to answer your question on Breeja – this is something I’ve been thinking about for a while. I think she doesn’t have a CHOICE but to swim fast in prelims. When you’re only taking 4 or 5 strokes per length, there’s no other way to swim it but fast.

Interesting reason.
You must be right.

My bet is on Sarah Henry for the 1650. I feel a huge swim coming out of her, especially at NCAA’s

DeBorde is a deadringer for Tyler Clary with that beard. He may want to consider shaving it though, if wants to challenge Chierighini tonight.

You weren’t kidding, he is a dead ringer. Fitting, as the phrase ‘dead ringer’ is an equine term, and these guys are the big horses.