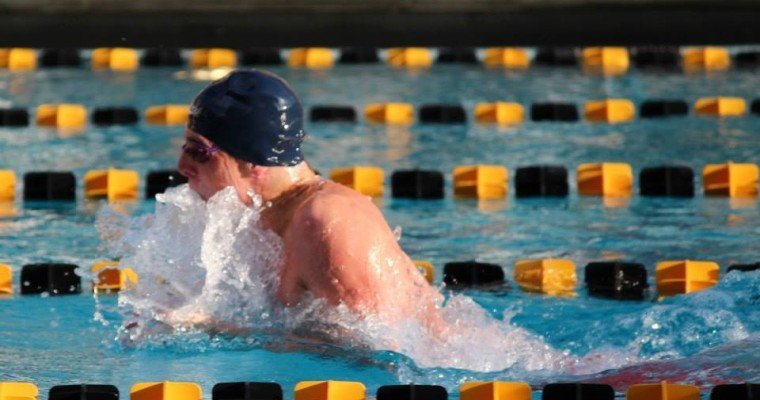 The California Community College Athletic Association’s state meet is one of the last of the junior college championships in the country. Made up of seven conferences (Coast, Big 8, and Bay Valley in Northern California; and Orange Empire, South Coast, Pacific Coast, and Western State in Southern California), the CCCAA is home to some very fast swimmers.

In the 2013 State Championships, Golden West College won both the women’s and the men’s meets. The women swept all the relays, and had at least one top-eight finalist in every swimming event except the 50 breast, 50 back, and the mile. Even so, they were outscored in individual points by runner-up Diablo Valley College and wound up winning by just 30 points. The previous year, DVC ended up second, 5 points behind Orange Coast College. This was a huge improvement from the 125-point margin with which OCC beat DVC in 2011.

Santa Rosa College and Ventura College have been right there in the mix the last several years, with Riverside College and Sierra College not too far behind. One team that has been steadily creeping up the rankings is Pasadena City College: hovering between 20-30th in the state for the last several years, the Lancers broke into the top ten in 2013 and might even make top six this year.

Golden West won the men’s meet in 2013 after having finished eighth the two prior years. Palomar, Diablo Valley, and Cuesta ended up second through fourth in a tightly-contested battle. Although they only won two relays and two individual events, Golden West consistently scored top-eight in most events and was able to put a nice margin between themselves and the rest of the field.

The 2014 State Meet brings a couple of changes. Notably, this the first year that a full week separates the Conference championships (which all took place over the weekend of April 14-19) from the final State Meet; in the past they have always been on consecutive weekends. The new schedule may affect the meet in a couple of ways:

The CCCAA Championship Meet includes two newcomers this year: Hancock College in Santa Maria and Santa Barbara City College. In addition, 2014 marks the last year that the women will swim the 50’s of the strokes and the 100 IM; in 2015, their events will match those of the men.

Women’s 200 IM: Pasadena’s Shannon Cheung is top seed with 2:07.76, but Golden West’s Melissa Bergesen will be with her every stroke of the way. Cheung beat Bergesen by 1/100 to take second place in last year’s final.

Women’s 50 free: The Splash And Dash is always exciting, but this year the women field a tight group. Lauren Vosseler of Golden West is top seed with 23.62, but just behind her and separated by only .40 are Racheal Gruetzmacher (Cuesta), Hannah Jarvis (Sierra), Kellie Thorsness (Orange Coast), and Laura Woods (Diablo Valley).

We expect it to be a very close race among Orange Coast, Santa Rosa, Diablo Valley, and Golden West for the top spot in the women’s race. One of these four schools has won the State Championship every year since 1999. Sierra is in the running this year, as well. Pasadena and its conference rival Mt. SAC are expected to be in a very tight race for sixth.

Golden West has the depth to run away with the men’s meet, but things get really interesting in the battle for second, with Mt SAC, Diablo Valley and Santa Rosa all vying for position. The next group jockeying for position is made up of Orange Coast, Ventura, and Riverside.

GWC wasn’t even the strongest in Orange County both men’s and women’s until just a couple a years ago. You have to go way back when Shirley Babashoff swam there for prior titles.

Well, Mark Schubert is a great coach and hes been pullin in quite a few foreigners.

how do I watch the event live?

From the meet director: “It is on takeitlive.tv, but they had a glitch with the streaming feed this morning. The link will go up on their site after the morning sessions. All prelims will be uploaded after prelims and the diving will stream at 1:00. All other sessions will stream live.”

Great coverage of the state meet…don’t see how it could be much better.