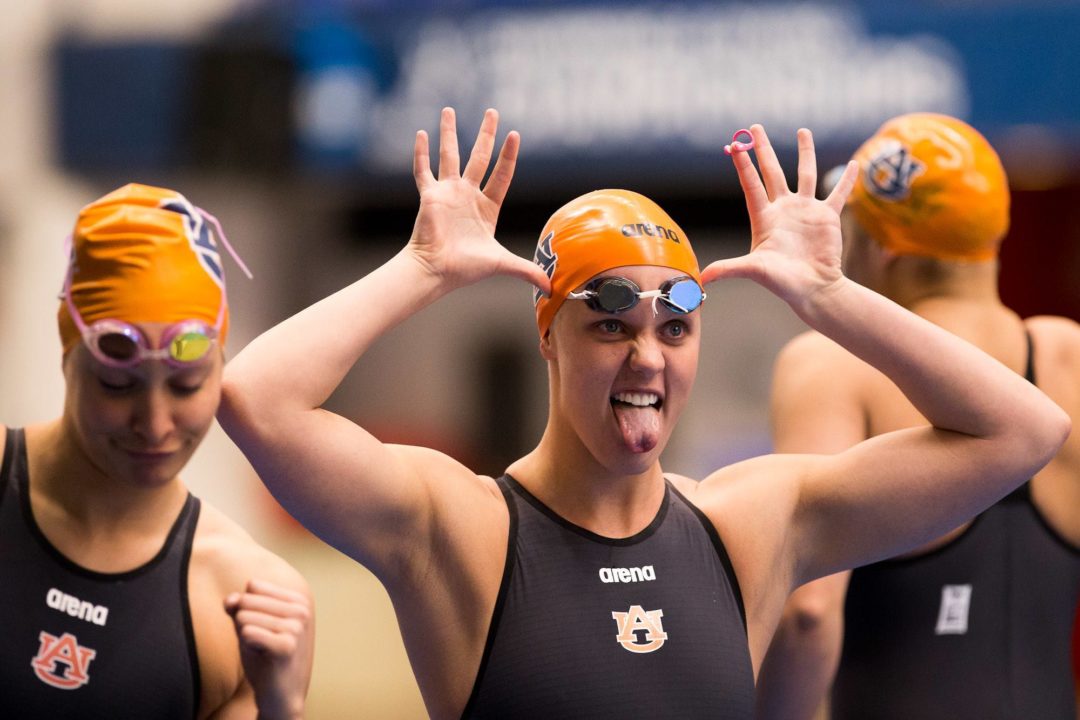 Day 2 rolls into the meat of the meet on Friday morning at the NCAA National Championships. (Photo Courtesy: Tim BInning/TheSwimPictures.com)

Day 2 has begun at the 2013 Women’s NCAA Championships at the IUPUI Natatorium in Indianapolis, Indiana, and we really get into the meet of the schedule on Friday morning.

For a quick preview of this morning’s events, see our quick preview here: http://swimswam.com/day-2-womens-ncaa-championships-quick-preview-with-live-links/

USC, even after DQ’ing their 400 medley relay on Thursday, was still pushing the envelope on this 200 medley relay here on Friday morning. Kendyl Stewart had a .13 reaction time on the fly leg, and anchor Kasia Wilk was just .08 on the anchor.

The result, though, for their bold exchanges was a top seed in 1:35.72 in this 200 medley relay. Split of the group goes to breaststroker Kasey Carlson, who was a 26.47 for the second-best split of the entire field.

The speed is picking up on day 2 of this meet, with it taking better than a 1:37 to make the final (for a change, that’s a good deal faster than last year).

Lurking behind them are the defending champs from Cal, including a 23.46 backstroke leadoff from freshman Rachel Bootsma. That was easily the fastest split on the field. Cindy Tran swam the butterfly leg, and split 23.36, so she looks a little better today than yesterday; and Kaylin Bing had a solid 21.89 anchor for them as well.

Wisconsin finished 9th, with a 21.59 anchor from Ivy Martin, and Texas was 10th – Laura Sogar split 27.20 on the breaststroke leg.

Michigan got their relay into the B-Final, which shows what a stunning turnaround this program has taken in one year under Mike Bottom (Angie Chokran was a 27.13 on the breaststroke leg), and Georgia just snuck in as the 16th seed. The only change for the Bulldogs from SEC’s was putting freshman Chantal van Landeghem on the freestyle leg, and she is the reason this relay finaled (by .01 seconds to boot over Ohio State) with a 21.65 split. They backstroke leg was over 25 seconds, which may give them some pause of changing this relay still for finals.

Florida’s Elizabeth Beisel came out on a mission in this women’s 400 IM, splitting a 1:56.6 on her first 200 yards Last year, against the likes of Katinka Hosszu, that wouldn’t be enough to win, but this year, it’s all about building as much of a lead over Caitlin Leverenz as she can.

Ahead of them were Stanford’s Maya DiRado in 4:05.49, who is also capable of busting out a great front-half, and Texas A&M’s Sarah Henry in 4:04.90. After misjudging and finishing 9th in prelims of the 500 free, Henry made no mistakes this morning and put herself in lane 4. That top seed doesn’t mean a whole lot, though, as times always come way down in finals of this grueling race.

USC got one swimmer into the A-Final, with Swedish National Record holder Stina Gardell taking the 5th seed in 4:06.73. They would’ve liked to get Meghan Hawthorne in as well, but her 4:08.08 left her 9th.

Cammile Adams made the Aggies the only team with two up in this event (7th seed – 4:06.83), and Georgia’s Melanie Margalis was 8th in 4:07.27. Margalis did a great job of moving up in finals of the 200 IM, so she could grab a few valuable points in final above that 8th seed.

Georgia got three finalists into the B-heat, and aside from Zhu (4:10.06) they all dropped a little from their in-season bests, so that’s good news for the Bulldogs.

Continuing a theme from the meet’s first day, North Carolina swimmers continue to blow away their seed times. Cari Blalock dropped almost a second to take the 6th seed, and freshman Annie Harrison survived all the way from heat one with a 4:10.50 to make the B-Final by .01 seconds.

That A-Final will have four Olympians in it: Beisel, Gardell, Leverenz, and Adams.

We raved about the importance and speed of Florida’s Ellese Zalewski for the Gators this year, after she missed NCAA’s last year to focus on Australia’s Olympic Trials. She really showed that in the morning heats of this 100 fly, with a 51.50 for the top seed headed into finals.

Cal’s Rachel Bootsma showed why Teri McKeever has put so much faith in her as a butterflier with the 2nd seed in 51.86, just off of her season-best, and Louisville freshman Kelsi Worrell is the 3rd seed in 51.91. That’s five swims under 52 seconds in prelims: for a change, better than last season.

Auburn’s Olivia Scott, who was 2nd last year, and Arizona’s Megan Lafferty were both 51.9’s.

UCLA’s Ting Wen Quah continued a great UCLA butterfly legacy by making this A-Final, the Bruins’ first of the meet, with a 52.08. Virginia Tech’s Heather Savage was 7th in 52.21 and North Carolina’s Kathleen Nolan was 8th in 52.25.

USC’s Jasmine Tosky finished 17th in 52.79, missing a final for her second event of the meet. Texas A&M’s Caroline McElhany also surprisingly won’t get an evening swim in this race. She made the B-Final last year.

The Georgia women did everything they needed to do in this 200 free, as they’ll emerge from prelims with six scorers headed into the final. Led by a 1:42.94 from Allison Schmitt and Shannon Vreeland as the 2nd seed in 1:43.36.

Tennessee’s Lindsay Gendron was off of her seed time by about a second, but avoided the trap that her teammate Floyd ran into and still made the A-Final with a 1:44.27.

Virginia’s Lauren Perdue, an Olympian in the 800 free relay, was the 11th seed in 1:45.15. This prelims allowed in six swimmers who wouldn’t have qualified last year.

There are a lot of swimmers who look like they can challenge Texas A&M’s Breeja Larson in this 100 breaststroke, after seeing three rounds of medley relays. Nobody has done it so far in the morning, as she took the top seed in a fairly comfortable 58.03. Most of that gap over the likes of USC’s Kasey Carlson (2nd seed – 58.66) and Arizona’s Ellyn Baumgardner (4th seed – 59.09) was on the back 50 yards.

Columbia’s Katie Meili continues her impressive run at this meet with a second top-8 finish, this time in 58.87 as the 3rd seed headed into the final.

The Wildcats got two up into the top 8; in addition to Baumgardner, her fellow senior Chelsey Salli sits 8th after the morning in 59.30. Sallie was the only A-Finalist who hadn’t already broken a minute this season.

Arkansas’ Nikki Daniels was one of the stars on their team last year in the 100 breast; this year, under Sean Schemmell, she’s become a national star, with a 59.11 for the 5th seed. That rebreaks her own School Record, makes her just one of three in this top eight to improve her seed time; barring a DQ, she will also become Arkansas’ first-ever All-American in the 100 breast.

Notre Dame’s Emma Reaney made the first A-Final of her young career (she’s just a sophomore) with a 59.12 for the 5th seed, followed by Texas’ Laura Sogar in 59.20.

Tennessee’s Molly Hannis after a very good medley split last night, was 9th in 59.31, meaning no rematch with her and Larson. She took her race out very fast, but lost that pacing on the back-half. Just .01 cost her a chance at the top 8. Minnesota’s Haley Spencer was 10th in 59.38, and Emily McClellan from Wisconsin-Milwaukee was 11th in 59.40.

The cut line for this race almost dipped under a minute. Michigan’s Angie Chokran was the 16th seed in 1:00.10.

Auburn had a ton of swimmers under a minute at SEC’s, but Lauren Norberg was the only Tiger to make the final – 12th with a 59.46.

Rachel Bootsma, after her great medley relay swim, not surprisingly took the top seed in this 100 backstroke in 50.75 – about nine-tenths better than anyone else in the field.

Florida’s Sinead Russell made the race a 1-2 for freshman, taking the second seed in 51.61; Texas A&M’s Paige Miller is number three in 51.68 on the second-half of a fly/back double (like Bootsma). This is Miller’s better race of the two.

Indiana’s Brooklyn Snodgrass was the 3rd out of this illustrious freshman backstroke class to make the final (52.00) followed by another Aggie Tess Simpson (52.01) and Missouri’s Dominique Bouchard (52.11).

Five of that top eight were Canadians: Russell, Miller, Snodgrass, Simpson, and Bouchard.

Cal got two up, though they would’ve loved a third to counteract Georgia’s 200 free points. Stephanie Au instead will focus on winning the B-Final, with a 52.25 for the 9th seed. Virginia’s Courtney Bartholomew (52.28) and Texas’ Sarah Denninghoff (52.35) are just behind her.

Arizona’s Lauren Smart initially tied with Stanford’s Annemarie Thayer for 16th, but won the swimoff in 52.08. That would’ve final’ed had it been swum in her heat.

That’s what I wanted to say. What’s her name? She is an Auburn swimmer.

so we can say that she is Peacocking right now?

The Bootsma/Tran swap paid off well for Cal. Georgia with a huge stumble…

Not really, they were seeded 15th so not expecting much here from them,

Yes, without a backstroker it’s hard to shine. Next season at Georgia they will have Miss America Olivia Smoliga and it will be much easier.

My bad. Unfortunately, I don’t think we did enough this AM to get back into it. We’ll have to see how tonight plays out but GA’s 1650 swimmers are legit – (2) Top 8’s.

I think gosharks talked about the 200 medley relay.

kelsi worrell fastest split in the fly with a 22.82!

Yes, good news. And she confirms later with the third time in the 100 fly prelims.