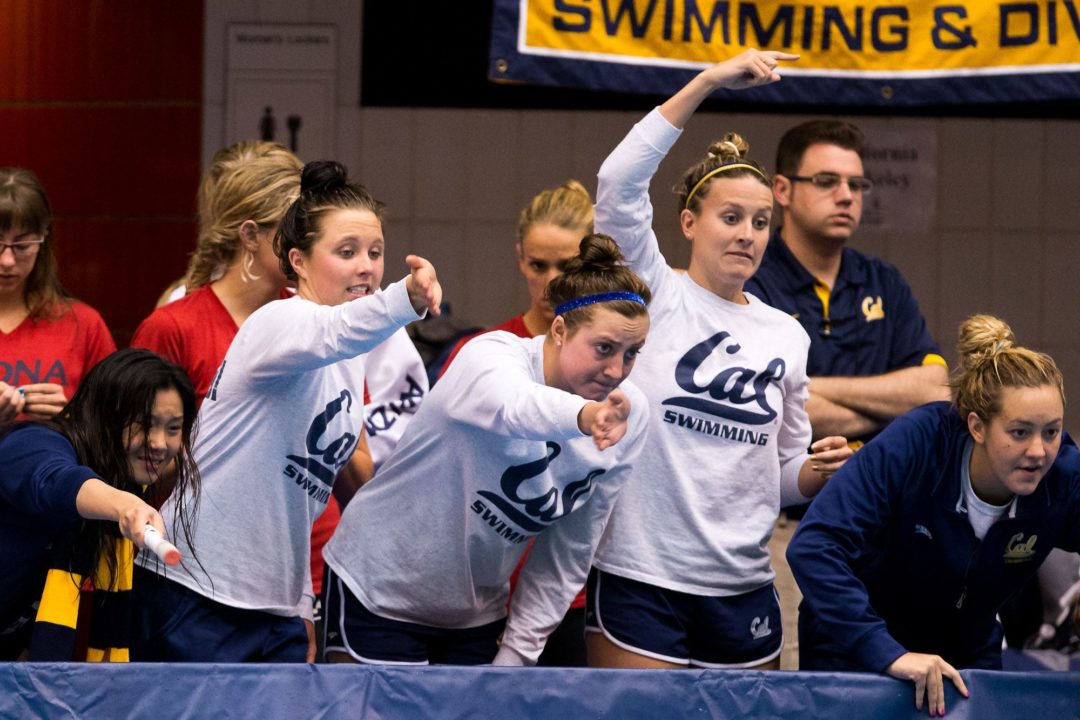 As anticipated by seeding, the Cal Golden Bears held the most top-8 spots going into tonight’s finals session following prelims, with 6 making the A and 4 making the B. That’s exactly what they were seeded to do.

The Texas A&M Aggies, meanwhile, had a way better day than the first of this meet. They’ll go from “red” to “green”; though they’re down one overall finalist, adding two into the A more than makes up for that.

Georgia held their spot well; in the 200 free alone, they had 6 scorers, which is as many as they were seeded to have in the whole meet.

Simply put: the top teams coming in to the meet performed on day 1, sometimes at the expense of the next 5. Tennessee didn’t have quite the same morning success as they did on Thursday, but they will continue to make their points on diving and relays.

These up/downs will focus on individual events, with diving now included.

The first number in each column is what actually happened, the number in parenthesis is how each team was seeded to finish in each event. Teams in Green did well compared to seed, teams in red struggled compared to seed, and teams left black were about where expected.

Georgia should win the championship. Margalis’ 8th place finishes in both the 200 and 400 IM were game breakers. If Cal would have gotten Au in the “A” Back Final and if Tran was on her game, things would have been much closer for the Bears. I see the gap obviously closing in tonight but tomorrow, things should go Georgia’s way. Thanks for the info. – very helpful and easy to read.

agree with USswimfan. as a diehard Cal fan it seems like the little pieces just aren’t falling their way and won’t be able to overtake UGA without a little help from them or others. unfortunately it seems like Tran is the missing link. her opening leg on the 4 medley (2 seconds slower than her PB) kept them from the crucial relay win and her lack of placing in either final in the 100 fly is a killer given her best-in-class underwaters. bootsma and pelton continue to inspire and cannot wait to see how successful they are in the coming 3 years (especially with Franklin in tow!) DISClAIMER: i know it’s easier to sit on a couch and comment vs.… Read more »

Agree, the vast majority of the Cal points come from only Tran, Bootsma, Pelton, and Leverenz, so if just one is off her game then their standing drastically drops.

How about UNC??? Wow. Amazing.