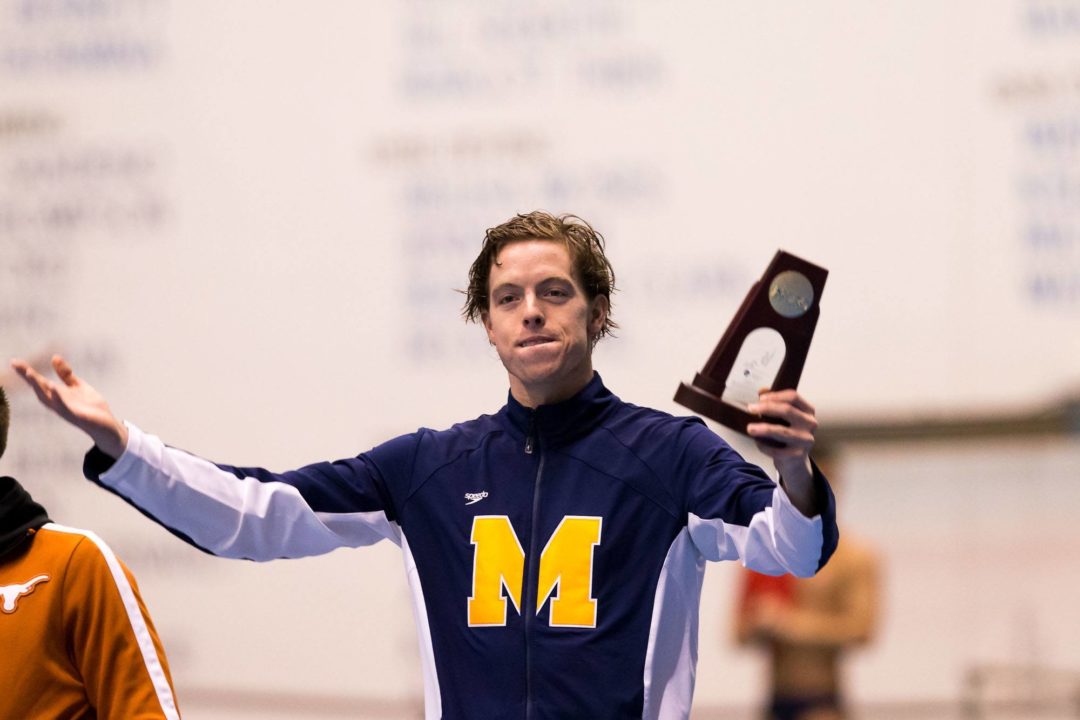 Michigan's Connor Jaeger already has a 500 free title under his belt. A win in the mile would almost seal-up a team championship for the Michigan Wolverines. (Photo: Tim Binning/TheSwimPictures.com)

It’s time to hand out some trophies. Aside from 7 event finals, we will also crown the 2013 Men’s NCAA team champions on Saturday night in Indianapolis, Indiana.

All the links you need to follow tonight’s action.
Michigan, USC have shots at history on night 3 of NCAA Championships.

The 1650 freestyle that Connor Jaeger swam on Saturday night en route to winning his second individual NCAA title of the meet wasn’t the fastest ever. His 14:27.18 was the 7th-fastest swim ever and just three seconds off of Martin Grodzki’s record from last year.

But to the eye, it looked as impressive as any mile I’ve ever seen. He and Texas’ Michael McBroom were dead-even through 800 yards, but when Jaeger decided that it was time to pull away, he did so with a vengance. Over the next 500 yards, he’d built about a 10-yard lead on the field and begin lapping everybody, turning on his legs as early as the 1000 mark. While his competitors saved the burst of speed (and sap of energy) that comes from kicking, Jaeger was driving away from them.

Georgia’s Matias Koski came out of the morning heats to place 3rd in 14:42.09. Georgia finished 3-5-10-11 in this race, with the 5 being from Andrew Gemmell, the 10 from Will Freeman, and the 11 from Martin Grodzki. Freeman was the only of those guys to swim in the final heat, but he was the only of the four who added from his seed time as well.

In the next final, Wisconsin’s Drew Teduits kicked off a streak of history on this last session that is at least the most exciting that I can recall having watched. Teduits went out much harder than he normally does in this race (47.60 on the front-half), and using his incredible underwater fought off a third-50 charge from Stanford’s David Nolan to take the NCAA title in 1:38.27.

That’s significant for a few reasons. First of all, for the sophomore, it’s a first title after not even qualifying for NCAA’s last season. Beyond that, for a Wisconsin program with a long and proud swimming history, that is their first event title since Fred Westphal won the 50 free in 1959! The last time the Badgers won an NCAA title in men’s swimming, it only took a 22.3 in the 50 free! They didn’t even measure hundredths! And now we’re seeing guys split 17’s! That’s hard to wrap your mind around.

He’s now the 6th-best 200 yard backstroker of all-time (behind only Clary, Lochte, Murphy, Godsoe, and Vyatchanin), and given where he’s come this year, he should easily drop the tenth he needs to drop the last two guys on that list. Coming into championship season this year, he’d never been better than 1:42.76, and coming into this season never under 1:43.0. What an impressive breakout year for Teduits.

Eastern Michigan senior Jacob Hanson took 4th in 1:39.87. That’s the highest-finish at this meet from a mid-major swimmer, and is unofficially a “Mid-Major” record in the event.

Virginia’s Luke Papendick won the B-Final in 1:41.50. That’s another school record for him in this event, knocking .06 off of his mark from prelims.

The “race” in this 100 free was anything but. By the time he emerged from the first turn, USC’s Vlad Morozov had more than half-a-body-length lead on anybody else in this field, and was swimming alone. He ended up turning in 19.14 and roaring his way to a new NCAA and U.S. Open Record of 40.76. That broke the old record held by Auburn’s Cesar Cielo in a 40.92 from 2008. (Read more about that record here).

Similarly, Auburn’s Marcelo Chierighini, though battled by his fellow Brazilian Joao de Lucca on the first 50, ended up easily pulling away for 2nd in 41.51.

All eyes were focused on Vlad, though, without much of a competition for the top spots, which is just where they should have been as the fastest 100 yard free in history went down.

De Lucca, winner of the 200 earlier in the meet, was 3rd in 42.27, followed by Texas Dax Hill (42.40) and Alabama’s BJ Hornikel (42.46). Four of the top five finishers in this race represent other countries internationally (though Hornikel is a dual citizen who has spent most of his life in the United States).

Kevin Cordes only swims two events individually: the 100 breast and the 200 breast. But so dominant were his records, that most of the public opinion that we’ve seen thus far likes him as the NCAA Swimmer of the Meet. This one was the most impressive individual swim of the meet, in our opinion, as he won in 1:48.68. That’s two seconds better than his record was coming into the meet. (Read more about that record here).

For the second breaststroke event of the meet, Arizona went 1-2, as senior Carl Mickelson finished 2nd in 1:51.90. Cordes’ time is so disorienting because of how much ahead of everyone else it is, but that swim by Mickelson ties him for 9th on the all-time list.

Cal’s Trevor Hoyt took 3rd in 1:52.19, followed by Indiana’s Cody Miller in 1:53.29. Miller dropped a second from prelims, but was still two short of his swim from Big Tens.

Tom Shields looked a little fatigued by the end of day 2 of this meet; on Saturday evening, though, there were no such signs, as he swam a 1:39.65 in this 200 fly. That broke his own NCAA Record of 1:40.31, and tied the Michael Phelps as the fastest ever in this race.

Shields opened this race up in 48.0, and only seemed to accelerate in his last two 50’s (though he virtually dead-split numbers 2, 3, and 4.) Florida’s Marcin Cieslak had a great back-half too, but even that couldn’t get him any closer than a second to Shields. He finished in 1:40.62 – just .02 seconds away from Mark Dylla’s 2011 Championship Record.

Cieslak will enter next year as a favorite in this race. That swim makes him the 4th-best in history (and 3rd-best as a college swimmer). He won’t go unchallenged, however, as Michigan freshman Dylan Bosch was 3rd in 1:41.37 and his fellow Florida junior Sebastien Rousseau was 4th in 1:42.20. That time by Bosch is the second-fastest ever by a freshman, behind only last year’s champion Will Hamilton. Hamilton was 11th this year in 1:44.01.

North Carolina’s Tom Luchsinger was 5th in 1:42.95; the Tar Heels 200 butterfliers, both male and female, had a great season.

Lester becomes the third A-finalist of the meet for the Badgers. This is a team with a lot of great individual swimmers; their next quest (with both Lester and Michael Weiss graduating) is to reproduce that with more relay-oriented sprinters. That would allow them to really break into the next tier of team scoring.

After that race, even with Bosch falling two spots from prelims and Whitaker getting last in the A-Final, the Wolverine lead was over 50 points. With neither they, nor Cal, having divers,  that meant even a 400 free relay DQ couldn’t derail the Wolverines from their 12th team championship.

A faulty last two dives cost Duke’s Nick McCrory the 3-meter on Friday, but when he got up on the platform, his best event, on Saturday, he was not going to give it back.

McCrory got the lead and then ran away from Stanford’s Kristian Ipsen, the ultimate diver of the meet,   with a final score of 495.90. Ipsen was 2nd in 452.90, and those two claimed the top two spots in each of the three diving events. Ipsen certainly executed well in this event, but as he’s not nearly as matured in his platform diving as he is on the springboard, his dives aren’t to the same level of difficulty, and often height, as McCrory’s were.

Indiana’s Conor Murphy took 3rd in 422.15. That sends off his coach Jeff Huber into retirement after 24 years with the Indiana Hoosiers and 37 years of college coaching. Huber is one of the best diving coaches ever in the United States, and it’s great to see his divers have success in his final year.

Texas and Arizona picked up big points in this A-Final, with Will Chandler placing 5th for the Longhorns and Rafael Quintero placing 6th for the Wildcats. Quintero is a Puerto Rican freshman who specializes in this platform and has NCAA Championship potential as he matures.

Those points from Arizona all-but-locked up a 3rd-place team finish for Arizona.

When USC was close in this relay and had Vlad Morozov left to go on their anchor, you know this one was over. He took a slight deficit and turned it into a sizable lead with a 40.28 anchor split – second only to the 40.23 that Nathan Adrian swam in 2009.

The full team of Cristian Quintero, Dimitri Colupaev (42.23), Jack Wagner, and Morozov were the winning team. That means that each of the meet’s five relays were won by a different team – the first time in historythat we’ve seen that happen since the schedule was expanded to 5 relays in 1989.

Michigan, meanwhile, took 2nd in 2:50.18. They again had four very good, very consistent splits, with everyone going between 42 and 43 seconds. That includes a 42.16 from Zach Turk, who was out  in under 20 seconds. This same foursome of Miguel Ortiz, Turk, Sean Fletcher, and Bruno Ortiz was the group for each of Michigan’s four shorter relays, and with all but Bruno graduating, the Wolverines will have a littl reloading to do next year.

Auburn took 3rd in 2:50.54, with Marcelo Chierighini leading off in 42.06. They graduate just one leg from their relay group: Kyle Owens who anchored in 42.69. Next year, though, Brett Hawke will have Arthur Mendes to work with for a full season. He was great at SEC’s, but on such a short turnaround didn’t really get his NCAA meet together. They also bring in Kyle Darmody next year, so the Tigers could win a lot of relays in 2014.

The Texas men were 6th, followed by Florida and Arizona. That finish for Texas ahead of Florida was just enough to nudge them into 5th place in the team rankings.

Michigan goes 1-4-6-9 in the mile. That pretty much seals up the title!

I Teduits could do that why wasn’t he on Wisconsin’s 800 free relay?