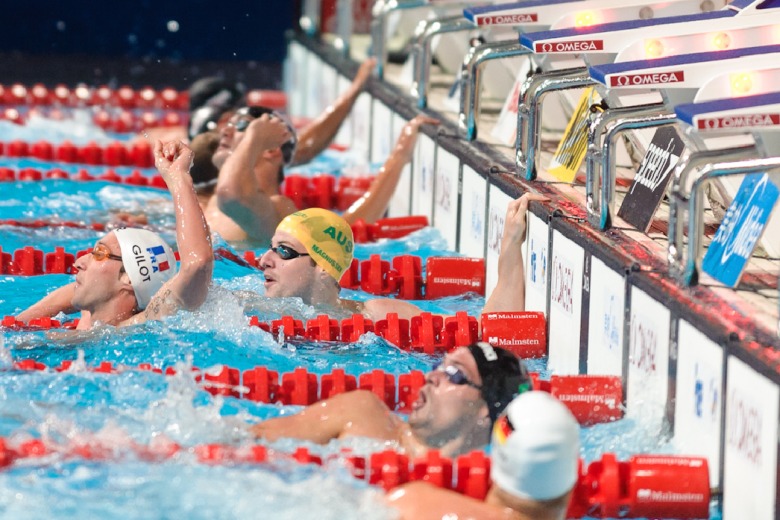 Although not a lightning-fast time, James Magnussen returns to his sprinting ways, making tonight's 50m freestyle final at the Victorian Open. Archive photo via Victor Puig

This morning’s prelims session of the 2016 Victorian Open has set up some must-see finals at the Melbourne Sports & Aquatic Center. Several key swimmers who have already racked up wins the first 2 days are on track to take home more hardware, and we got another look at Aussie sprint star, James Magnussen, making his first meet appearance since last summer’s shoulder surgery.

St. Peter’s Georgia Bohl is looking to add to her medal collection today, clocking the swiftest morning mark of the women’s 50m breaststroke. 31.21 was Bohl’s time to set the stage against visiting Swedish swimmer Jennie Johansson, who also scored a sub-32-second mark in 31.95. The pair finished 1-2 in the women’s 100m breaststroke earlier in the meet, with Bohl earning gold in 1:06.98 to Johansson’s runner-up time of 1:07.56, so the two are used to being head-to-head as they will be in tonight’s 50m breast final.

The men’s 200m breaststroke prelims saw young gun Matthew Wilson score the top time of the morning, touching in 2:15.93 to lead the field into the finals. At just 17 years old, Wilson is inching towards his age category’s National Record, which sits at 2:13.13 by Simon Cowley all the way back from 1998. Lurking in the field, however, is Scottish Olympic silver medalist, Michael Jamieson, who touched in 2:19.32 for the 4th seed. He and other contenders to the tune of Lennard Bremer (2:16.30) and Ryan Roche (2:17.65) are set to wage a battle in the event tonight.

Fly girl Emma McKeon, who rocked a 57.27 100m butterfly win last night, took the top seed in the women’s 200m freestyle this morning, managing the only sub-2-minute mark. McKeon touched in 1:59.74 to land herself in the middle of the pool for tonight’s final, but she’ll face the likes of Chandler’s Jessica Ashwood, who already earned the 800m freestyle win and a runner-up silver in the 400m freestyle. Bronte Barratt, who earned the 400m free gold medal, is also in the hunt with her morning time of 2:02.01.

For Magnussen’s 2nd race of the meet, the 24-year-old former World Champion did enough in the morning heats of  the men’s 50m freestyle to take a slot in the final, although the event overall was a tad lackluster this morning. Whereas the men’s 50m freestyle prelim at the recent Arena Pro Swim Series in Austin, for example, saw 14 swimmers race their way to a sub-23 mark in the morning, just 2 swimmers did so in Melbourne. 29-year-old William Copeland touched in 22.93, with Daniel Hunter touching just .01 behind in 22.94.

Slide down to the 6th position and you’ll find Friday’s 100m freestyle champion, Magnussen, in a comfortable spot for finals, logging a time of 23.03. Obviously, with pre-surgery times more in the 21-high range (21.98), Maggie no doubt is aiming at a more internationally-threatening time now just 3 months out from Olympic Trials. The entire morning field was playing their cards close to their chest, and we should see at least 22-mids come tonight’s finals.

Double World Champion Mitch Larkin will look to sweep the backstroke events, having claimed the top seed of the morning in the 100m event. Larkin registered a time of 54.89, followed closely by Benjamin Treffers‘ 54.92, so the two are set to duel in the finals tonight. Larkin holds the world’s top time of 52.11, so he certainly has more gears at his disposal, should he need to engage them.

The timed finals of the men’s and women’s 1500m freestyle will also be taking place during the PM session.