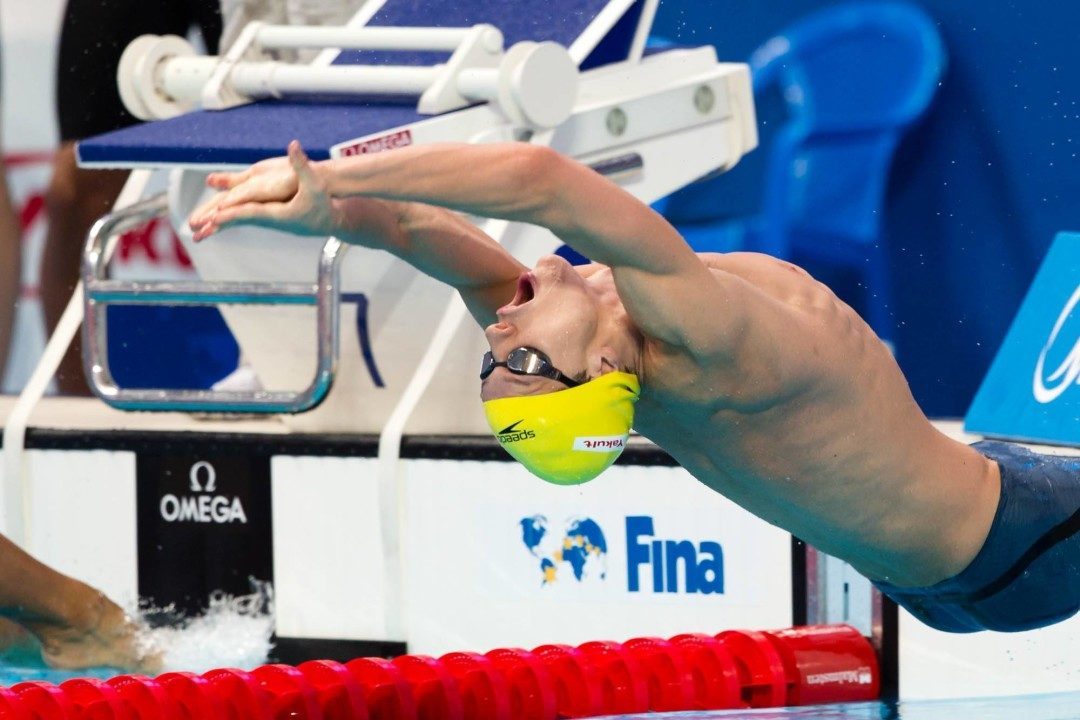 Larkin looked good in 200m back heats in Melbourne this morning. Archive photo via Tim Binning/TheSwimPictures.com

Day 2 of the 2016 Victorian Open saw double World Champion Mitch Larkin take to the pool in his 2nd individual event, the men’s 200m backstroke. Having already logged the 50m backstroke win on Day 1, Larkin comfortably eased into the top seed with a morning swim time of 2:00.04, ahead of Nunawading’s Josh Beaver who stopped the clock at 2:00.69.

With London silver medalist Christian Sprenger having announced his retirement this week, the Aussie men are looking to fill some hefty shoes in the sprint breaststroke department. This morning’s 100m breaststroke race was on the quieter end, with no competitor clocking a time beneath the 1:02 threshold.

SOPAC NSW’s Matthew Wilson touched exactly on 1:02.00 for the top seed and To doubled up on his 200 IM outing with the 2nd seeded effort in this race, bringing a 1:02.55 into tonight’s finals. As with yesterday’s 50m breaststroke, Scotland’s Michael Jamieson found himself just outside of the A-Final, registering a mark of 1:04.65 for 9th overall.

The trio of fierce females that battled against each other in yesterday’s 50m butterfly event were matched up again in the 100m distance, with St. Peters’ Emma McKeon leading the charge this morning. McKeon clocked a swift 58.63, while yesterday’s 50m silver medalist, Madeline Groves, scored the 2nd seed with her time of 58.85. 28-year-old Alicia Coutts completed the top 3 slots with her time of 59.01 and the three represented the only sub-minute swimmers of the morning heats.

Of note, 20-year-old potential contender, Taylor McKeown, was a ‘no swim’ in the 50m butterfly event, focusing instead on the 200m breaststroke. McKeown claimed the top seed in a time of 2:29.41, with Chloe Tutton close behind (2:29.90). Yesterday’s 100m breaststroke winner, Georgia Bohl, made her intentions known in this race as well, touching in a time of 2:31.22 for 3rd seed.

World Championship bronze medalist and Oceanic Record Holder in the women’s 400m freestyle, Jessica Ashwood, raced her way to the top seed in the event today, nabbing a time of 4:10.94. Ashwood’s swim was solid, but with a personal best of 4:03.34, the time that won her the bronze in Kazan, look for the Aussie to shave several seconds off her mark come finals. St. Peter’s Bronte Barratt is also in the hunt for the Victorian title, logging a time of 4:11.54.

The women’s 100m backstroke saw both Belinda Hocking and Madison Wilson disqualified from heats (no details at this point), leaving Canada’s Hilary Caldwell as the top seed.

Both Wilson and Hocking were disqualified for valid reasons (false start and complete submergence on finish), yet they have been reinstated. This is a perfect example of the double standards that are evident in high level Australian swimming. Famous/professional athletes are given exceptions to rules that young and slightly slower athletes have to follow. They both got away with it because they are members of the Australian team, and other athletes get no such treatment.

That may indeed be the case but your charge with regards to Wilson does not tally with what was told to the reporter in the later article; namely being submerged beyond 15m off the start which was apparently dropped upon video review. I have not seen the footage so am not going to question either your veracity nor that of the judge; just merely stating their official comment post review.

Looking at the official results it looks as though both backstrokers have been reinstated. For the record, if they are re-disqualified, the times are:
Wilson – 59.84
Hocking – 1:01.81

I wonder if there is any news regarding the disqualification of Madison Wilson and Belinda Hocking in the heats of the 100m back? Wilson looked as though she false started – reacted before the starters gun.

Just a quick note about Kylie Palmer – she is no longer competing at the Victorian Championships due to a hand injury which required surgery. She’ll be out of the water for two to three weeks.