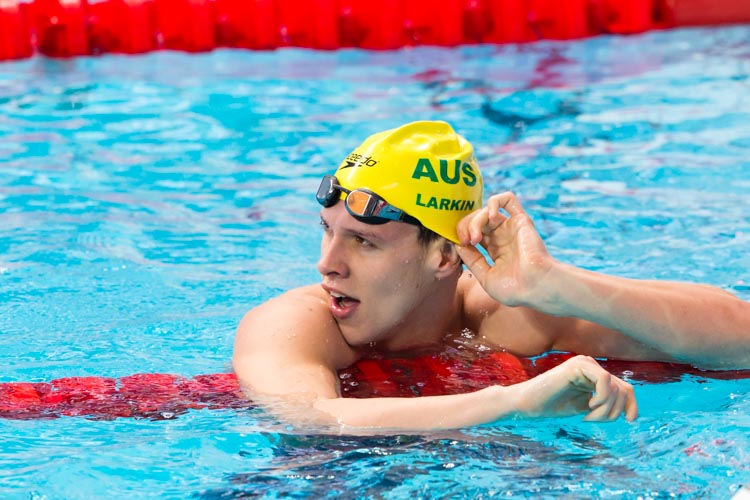 Larkin and McKeon are two Aussies on fire in Melbourne. Archive photo via Tim Binning/TheSwimPictures.com

Golden boy Mitch Larkin scored two more wins on Day 2 of the Victorian Open Championships, beginning with the men’s 200m IM. The 22-year-0ld edged out Trinity Grammar’s Kenneth To to register the only sub-2-minute time of the night. Larkin touched in 1:59.31, with To finishing in 2:01.40 and Justin James claiming 3rd in 2:01.76.

In an impressive double win, Larkin then took the men’s 200m backstroke handily in a mark of 1:55.16; a time which is dang scary for being January. Larkin split splendidly at 56.42/58.74 to beat out the competition by more than two full seconds. Joshua Beaver wound up with silver in 1:57.89, with Keelan Bridge a distant 3rd in 2:00.97.

Larkin’s time tonight ranks as the 2nd-fastest in Aussie history, sitting only behind the wicked 1:53.17 Aussie Record he set at the World Cup Dubai last November. With his performance tonight, Larkin now owns the top 2 times in the world in the event and is ever building his case to be named the favorite in the event at the 2016 Olympic Games.

With Melbourne Vicentre Swim Club’s distance ace Mack Horton dropping out of the men’s 800m freestyle race, Canada’s Ryan Cochrane took ahold of the reigns for a gold medal-winning finish. 7:56.11 got the job done for the 27-year-old, with Chandler’s David McKeon stopping the clock at 7:58.30 for 2nd place. Both men were well ahead of the rest of the field, which included McKeon’s teammate, Jack Mcloughlin who finished in 8:05.40 for bronze tonight.

For Cochrane’s effort, his time is now positioned as 4th-fastest in the world, with McKeon just behind as the 5th-fastest.

With Olympic silver medalist Christian Sprenger having just announced his retirement this week, the Aussies are certainly on high alert to cultivate any breastroking talent that will desperately be needed for the squad to have an impact in the medley relays come Rio.

The women’s race of the night belonged to 21-year-old Emma McKeon who blasted a crazy-fast 57.27 100m butterfly to clench the win and score a career-best. Out in 27.33, McKeon brought it home in 29.94 to shave .04 of a second off of her previous personal best of 57.31. McKeon’s time sits as the 4th-fastest in Australian history – in January!

Impressively, two other swimmers went sub-59 in that same race. Alicia Coutts had a solid effort, coming in with a 58.22 for silver in that women’s 100m butterfly, with Madeline Groves scoring bronze in 58.70.

The women’s 100m backstroke wasn’t without controversy in prelims, where 2 of the major players originally found themselves disqualified, only to be reinstated shortly after a video replay. Those women, Madison Wilson and Belinda Hocking would wind up as the gold and silver medalists in the final event, with Wilson claiming the ony sub-minute time of the field. 59.22 was what it took for Wilson to log the win, with Hocking finishing 2 full seconds behind in a time of 1:01.29.

Wilson’s time sits as 4th-fastest in the world this season, after already owning 2nd-fastest (59.09) from Queensland Championships late last year. Wilson’s impressive times paired with Emily Seebohm’s elite consistency highlights how the Australian backstroking squad is looking mighty fierce. Not to mention they still have young Minna Atherton who has demonstrated her prowess with a sub-minute 59.37 World Junior Record.