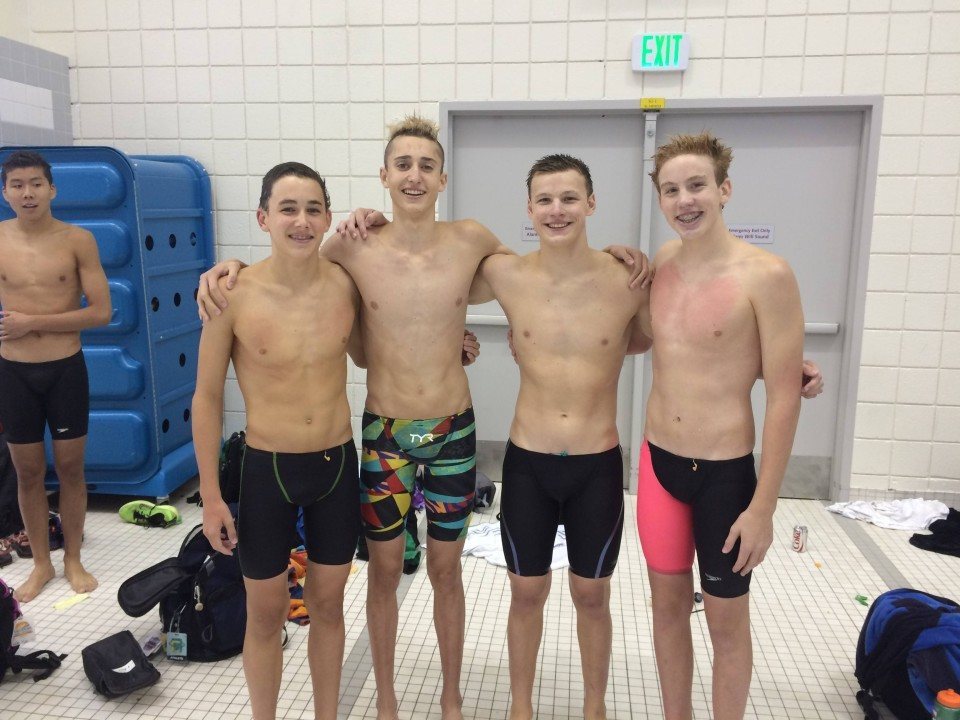 Liam Bell, seen here as part of Dyanmo's record-setting relay team, took the top seed this morning in the 100 breast at the West Lafayette Futures Championship meet with a sub-1:04 swim.

Liam Bell became only the third 14 year-old in the history of USA swimming to break 1:04 in the long course 100 breast Friday morning at the West Lafayette Futures Championship meet.  Bell, who swims for Dynamo Swim Club out of Georgia, already had the third-best mark all-time in the age group with a 1:04.17, but knocked .27 off of his previous best time to go 1:03.84 in this morning’s preliminary session.

The only other two swimmers to go under 1:04 by the age of 14 are rising stars Reece Whitley and Michael Andrew.  Whitley holds the National Age Group record with a time of 1:03.23.  Andrew, who previously held the record, is second with a time of 1:03.83.  Bell was only .01 behind Andrew’s mark with this morning’s swim, meaning that even the slightest time drop will put him into second place on the all-time list.

Bell’s swim this morning will give him lane four for tonight’s final, and only one other swimmer in the A-final is under the age of 18.

This summer marks the debut of the Futures Championships, which USA Swimming announced as a way to “bridge the gap” between sectionals and national championship meets.  In addition to West Lafayette, the other two Futures Championships meets are being held at Greensboro, NC, and Gresham, Oregon.

Liam Bell, Jake Foster, Carsten Vissering, Michael Andrew, Reece Whitley, Ethan Dang, Adam McDonald, Alex Flores, Andrew Seliskar….
US men’s breaststroke in the junior ranks has really stepped up in the past few years.
It will pay off in 2020.

Don’t forget about Cordes for ’16!

At the meet, was really fun to watch. He was a better timed final 5m worth of swimming away from the trials cut. Last couple strokes were a bit off, looking forward to seeing him sort that out and make it to the show.