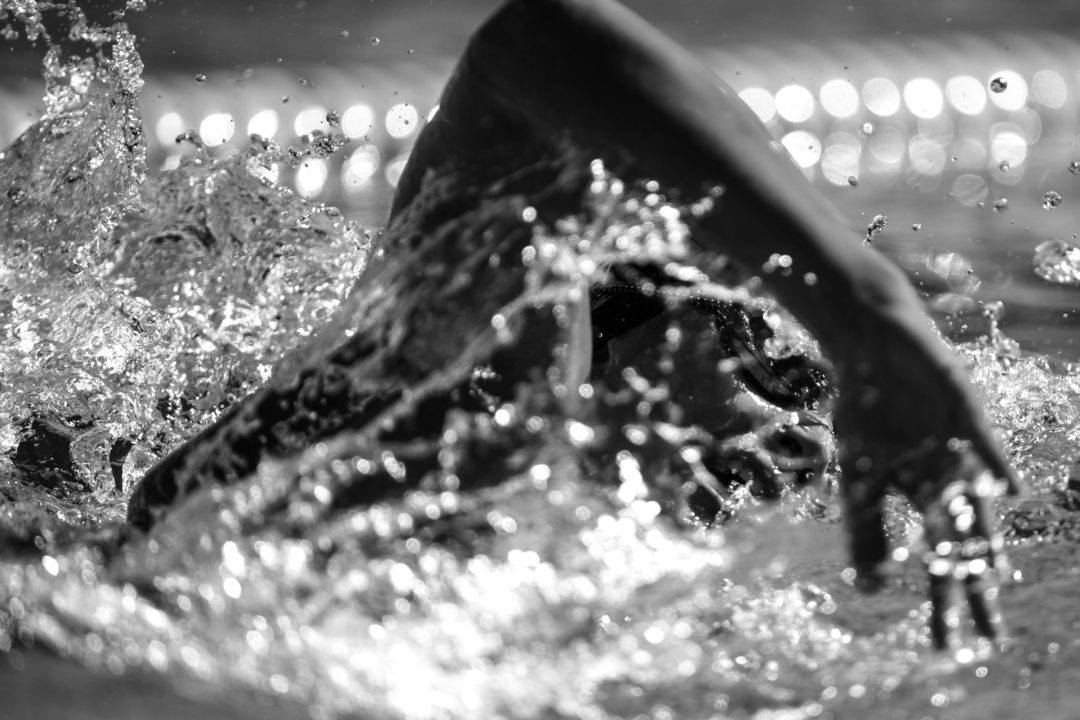 I was at our team’s Masters meet this weekend and I noticed how the energy was different than at an age group meet. In addition to fewer swimmers and spectators, everyone looked relaxed. Current photo via Mike Lewis/Ola Vista Photography

I was at our team’s Masters meet this weekend and I noticed how the energy was different than at an age group meet. In addition to fewer swimmers and spectators, everyone looked relaxed. Yes, there were a few anxious swimmers but, generally, the atmosphere was very laid back and upbeat. A friend explained it like this: “Masters has more of a party atmosphere of a community of swimmers rather than the nervous energy found at age group meets.”

Everyone at a Masters meet—the swimmers, coaches, officials and family—really want to be there. Or, they wouldn’t be there.

Young kids drop time as they improve and get older. Masters may not.

Masters swimmers are happy when they age up because they feel it’s an advantage to be the youngest in their age group.

Although some Masters swimmers may be focused and serious, mostly they’re laughing and joking. There’s not much at stake for them.

Masters swimmers feel like they’ve won if they make it off the blocks and complete their event close to the time they swam the year before.

Getting out of the deep end without a ladder can feel like a major accomplishment in itself.

You will not see a single crazy parent anywhere at a Masters meet.

Nobody is trying for junior national cuts or college scholarships.

Every Masters swimmer is self-motivated and has their own reason to compete whether it’s strictly fitness, getting a national time or getting out of their comfort zones.

Nobody is nervous watching you swim.

Every swimmer gets out of the water with a smile on their face. You won’t see any tears.

In what other ways are Masters meets different than age group meets?

Coached Masters for over twenty years. When I started the team my mission/goal statement was simple. “In one year I want to expose all of my swimmers to all wonderful things I enjoyed in swimming.” I think the team and I did just that. MASTERS has something for every one and believe as a swimming family our team experienced it all. A truly wonderful experience But like a true family had it all. The great, good, bad the ugly and at times heartbreaking. BUT WORTH EVERY MINUTE OF IT!!

No entry cards etc. When it’s your heat you just walk up to your block. If you miss your race it’s your problem.

Do kids even use entry cards these days?

You measure success differently than when you were an age grouper. For example, I was 1.8 seconds slower in the 100 yard breaststroke at age 59 versus 60 years old, but won the age group women’s of 60 to 64 with two competitors and the heat since it was a senior Olympics event and guys swam separate. Got 3 medals at the meet, two golds, 200 Im, no competition in age group and 100 yard breaststroke and 2nd in 400 yard freestyle.

You can be on a relay with someone twice (or half) your age!

If more Age Group Parents swam it would be less stress on the young ones.

This is true. I’m surprised that since the 1970’s when I swam there should be a lot more parents out there with swimming backgrounds but there is not.

“Nobody is nervous watching you swim.” – Umm, My wife is! LOL

Many years ago, about 20, my father and I were on the same relay at Master’s Nationals in FTL. He passed away a while ago, but I still display the photos of the two of us in our speed / paper suits. He was a recreational swimmer, having swum his first mile at age 40. He was afraid to dive from the blocks because of their height, so he dove off of the deck. Everyone was very accommodating. My masters teammates told me repeatedly how much they enjoyed the fact that my father and I swam in the swam meet, on the same relay.

My kids are younger. Maybe one day history will repeat itself.

No one with a series of undecipherable (to a non swimmer) numbers written on their arm or leg.

Everyone’s tongue is its natural color and not dyed blue or green from a fun dip or other assorted sugary confection.

Everyone wearing a cap knows has their ears tucked in and is not doing their best Dumbo impression.

Everyone’s suit fits them without wrinkles…I know we have all seen that 8 year old wearing a size 24 jammer that looks like one of MC Hammer’s backup dancers.

You can tell if someone is “shaved and tapered”.

I meant, “People listening to music that you’ve actually heard of and not sung by someone whose name is NOT spelled correctly or with an apostrophe in their name like “Lil’”

I’m a Masters swimmer, but I do love some Lil’ Wayne behind the blocks.