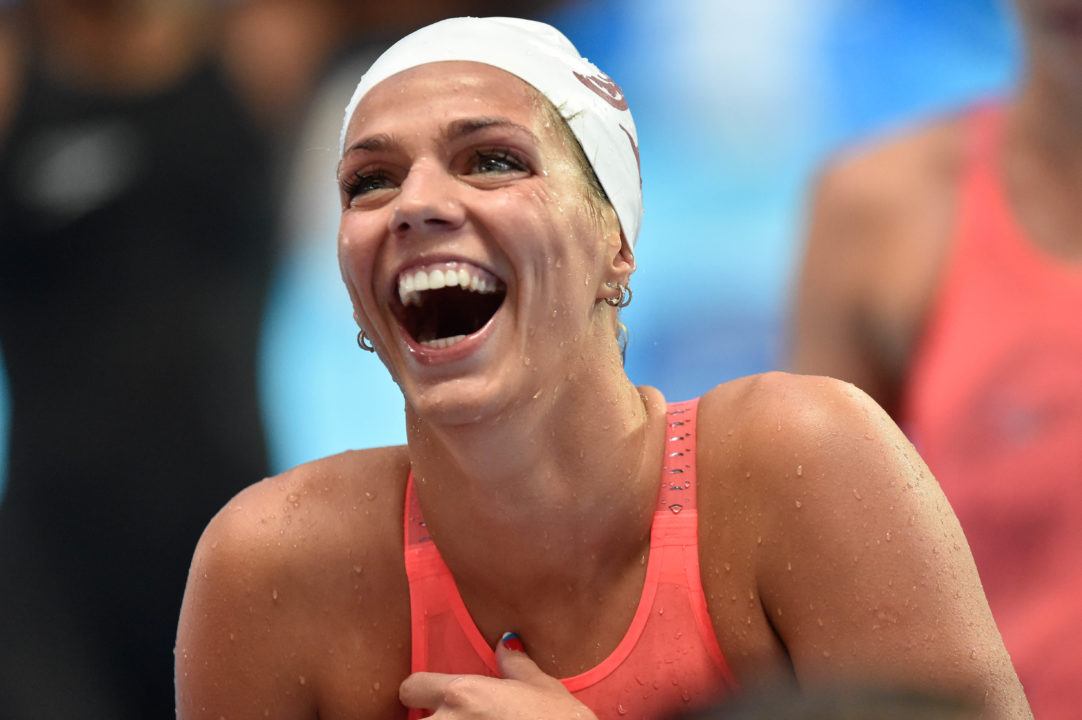 Russian swimmer Yulia Efimova has been officially added to the start lists for the 2016 Rio Olympic Games. She will swim... Archive photo via Mike Lewis/Ola Vista Photography

Russian swimmer Yulia Efimova has been officially added to the start lists for the 2016 Rio Olympic Games. She will swim the 100 and 200 meter breaststrokes individually, and one would presume on the Russian 400 medley relay as well. This comes after some combination of FINA, the Russian Olympic Committee (ROC), and the International Olympic Committee (IOC) decided that Efimova would be eligible to compete in the Olympic Games in spite of an IOC directive that was set to exclude her.

Efimova has twice tested positive for banned substances – once in 2013 (for which she served a 16-month suspension) and once earlier this year for a newly-banned substance meldonium, for which she was found as having “no fault” after the World Anti-Doping Association (WADA) couldn’t determine how long the substance might remain in ones body after being outlawed on January 1st. Efimova is not currently suspended for anything, but the IOC ruled that no Russians who had previously been sanctioned for doping would be allowed in the Olympics after WADA accused the entire federation of covering up positive doping tests.

While the situation of who made the decision is still murky, Efimova was cleared to compete in Rio on Friday, and in a much-needed confirmation of the interpretation of that decision, has now been officially entered into the swimming events.

In the 100 breaststroke, Efimova will be the 2nd seed (start lists here) behind American Lilly King. She placed 4th in that event at the Beijing Olympics and 7th in London in 2012, and is also the defending World Champion. This will be Efimova’s first event, with prelims coming on Sunday morning.

Natalia Lovtcova has also been added to the women’s 50 and 100 free.

the IOC obviously is not credible to allow 2 time doper to go to Olympics. How is Sharapova banned from tennis and Efimova allowed? I would be ticked off if I did not place because of her when I followed rules.

How Michael Phelps became the eight-time Olympic champion in Beijing? Such could not be anyone else.
Or try to compare photos of Serena Williams with Marina Sharapova and you will understand who uses steroids.

I don’t care to be PC about this — just want to say it as I see it. I’ve been through a jumble of emotions and beliefs about doping, spanning a gamut from anger to confusion to wondering whether I can have any compassion about any of this. Well. Sport, police thyself, is the new cry, and Horton must be saluted for coming out first and most vociferously about the problem. But there is a very dark, very hidden game at work here. We can point at Yang and Efimova (and anyone else) all we want…but I can’t help feeling that the individuals are not at the center of the blame. I know this is a controversial idea, but listen:… Read more »

The FINA official who made the final decision should be investigated. I’d bet that money exchanged hands. FINA, FIFA they’re all the same.

USA are kings of doping, Gatlin will run, they cover up a lot of positives!

This is insane. There is no reason for this to happen except for a total disregard for the rules. Russia can buy off the IOC and it is unfair for all clean Olympic swimmers. Shame!!!

This is one-sided story about fairness and shame. Yelena Isinbayeva (pole vault Olympic Champ and current world leader) is clean, but not participated in Rio; Sergey Shubenkov (110 meters hurdles – World Champ) is clean, but was not allowed to participate; Maria Kuchina (World Champ and leader in high jump) is clean but was not allowed to participate. There are too many of such stories! But Gutlin is not clean,but running in Rio for the US and he was able to buy off some “agreement” with the drug investigation committee. I believe that this is unfair and shame that Gatlin is participating in Rio after buying off the IOC; but the clean and top seeded sportsmens from Russia, like Isinbayeva,… Read more »

What a carful of clowns: FINA, IOC, WADA, CAS, ROC: no one seems to be driving. Their integrity and credibility: in the trash. The way Efimova’s case was handled from the beginning was a disgrace, and that she’s been reinstated–2 days before her first swim–is simply incredible.