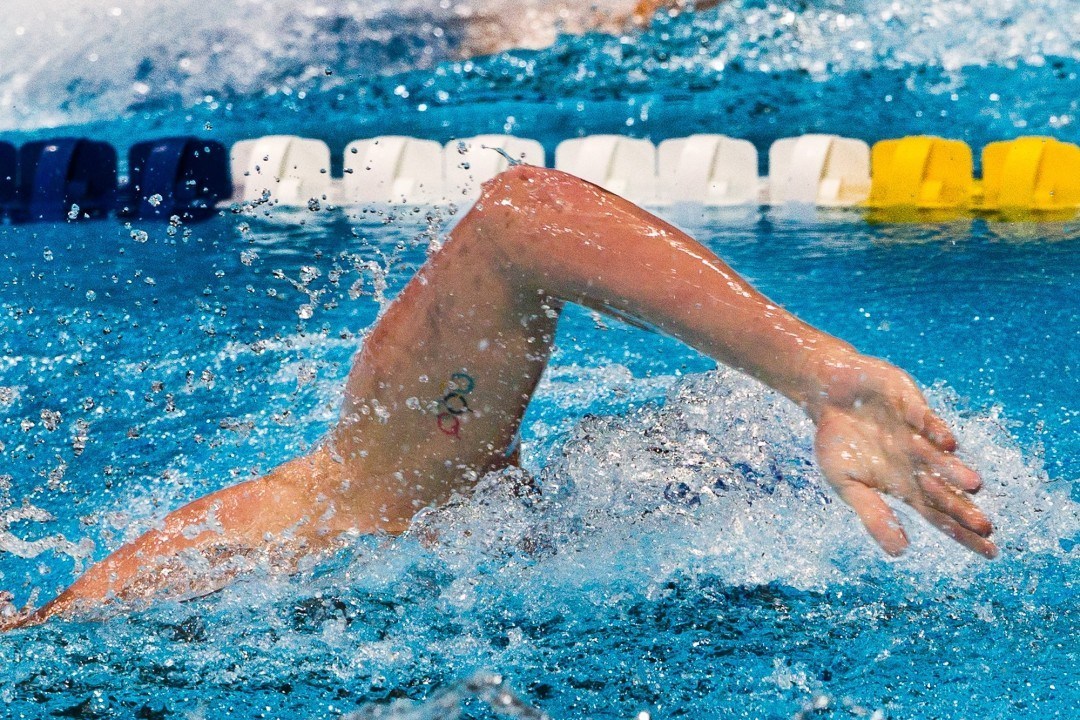 Day three of the 2014 Speedo Western Section LC Championships in Gresham, OR. kicked off today, and with it some... Stock photo via Tim Binning/TheSwimPictures.com

Day three of the 2014 Speedo Western Section LC Championships in Gresham, OR. kicked off today, and with it some great swimming.

Taylor Ruck finally earned herself a gold medal after placing third in the 100m freestyle on night two of the meet. The 14-year-old swam a 2:00.27 knocking some significant time off. Jasmine Alkhaldi who won the 100m freestyle last night finished second to Ruck almost three full seconds behind in 2:03.13. Grace Carlson tied Alkhaldi for the second place finish. Ruck was the youngest swimmer in the top eight.

Seventeen-year-old Madeline Myers took down a very close field in the women’s 400m IM, ultimately coming up with a 4:51.55 to give her the victory. Coming off the halfway point, Myers was only in fifth place but managed to create a huge lead for herself with a great breaststroke split of 1:22.19 that blew away the rest of the field. Lisa Bratton who was first at the 200m mark ended up finishing second in 4:55.55 followed by Morgan Rosas and Bridgette McNally.

John Bushman who won the 200m breaststroke on night two was back at it again with a win in the 400m IM here on night three. In what was almost an identical race to the women’s 400m IM, Bushman was only fourth to the wall at the 200m mark, but managed to pull ahead with a breaststroke split of 1:12.05. Bushman finished the race ahead of both Andrew Hartbarger and Darian Brunetti who finished second and third respectively after being behind them at the halfway point. Bushman’s breaststroke split helped him get his hand on the wall in 4:26.53 over Hartbarger’s 4:27.65 and Brunetti’s 4:29.31.

The competition will run for two more days. Full meet results can be found here.

Taylor Ruck has been a phenom in AZ since she was 9yrs old. From what I have heard her father is a former Pro Hockey player and I believe she was born in Canada but has dual citizenship. Taylor has a younger brother who swam and was part of a 10 & under national age group record.

Ok. Dual citizenship US/Canadian.
It reminds me of another young swimming female prodigy. 😀
The difference between both girls is that Missy was born in USA.
It will be interesting to see which country she’ll choose to represent.
Canada must pray to keep her.

Pretty sure she is a single citizen of Canada alone, at least as of now.

Subsidiary question about the US NAG records and the US all-time lists..
USA swimming says you must be a US citizen to break NAG records.
http://www.usaswimming.org/_Rainbow/Documents/7b53eefd-778e-40f9-8913-f8aeefb9433a/NAG%20App%20Indiv.pdf
Vlad Morozov still holds the 17/18 50 free NAG record. I didn’t know he was a US citizen.
And if Taylor Ruck, Vlad Morozov, Fernanda Delgado or Joe Schooling, to take a few examples, are not Americans, why are they in the US all-time lists?

She’s Brazilian. You must be aware of that! 🙂
I’ve found she trains in Florida at Azura Florida Aquatics.
It looks like there’s a big Brazilian contingent there.
http://www.azuraquatics.com/site/2014/07/11/2014-summer-speedo-champions-series-orlando/

Hey Bobo – that is probably an error on the USA Swimming lists. Wouldn’t be the first time. You are correct, Morozov shouldn’t hold the record.

USA Swimming does generally include all members on their top 100 lists, though, regardless of citizenship.

She’s got four great strokes, so it would’ve been cool to see what kind of time she could’ve put up in the 400 IM, as well.