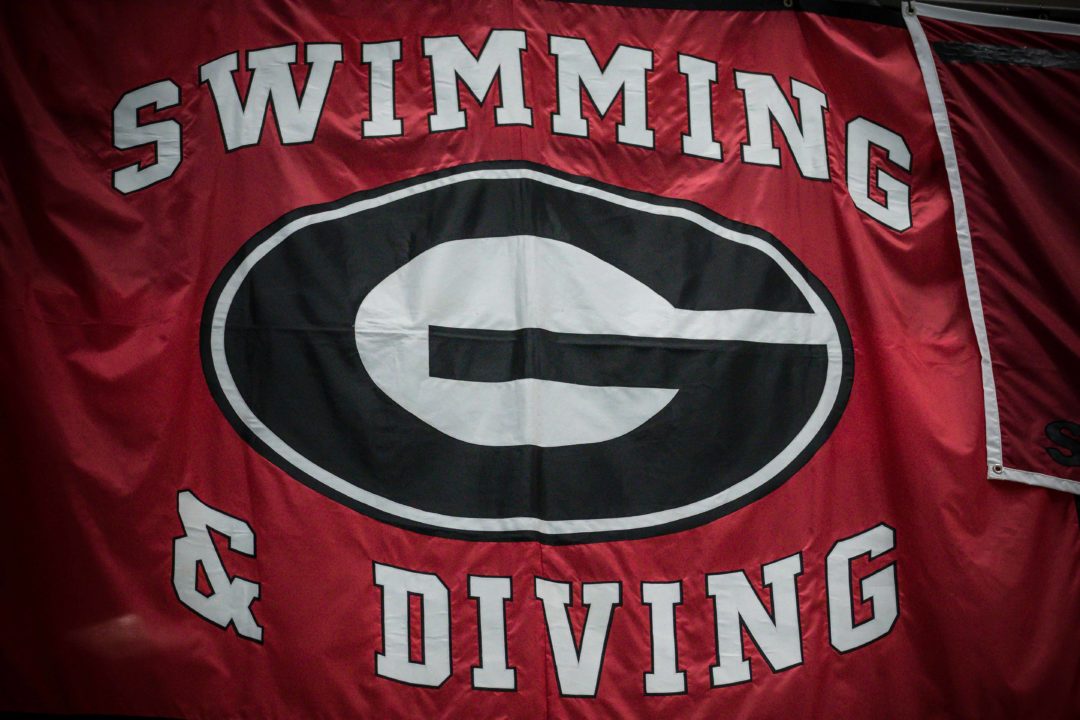 In his debut with the Georgia Bulldogs, Matt Sates set the bar high. Stock photo via Jack Spitser/Spitser Photography

Georgia and DIII powerhouse Emory went head-to-head today in Athens, with the Bulldogs coming out on top in both meets. Today’s meet marked the debut Matthew Sates, the South African teen who downed a trio of World Junior Records this past fall.

In his debut with the Georgia Bulldogs, Matt Sates set the bar high. The World Junior Record holder in the SCM 200 free, Sates handled the field in his first SCY 200, posting a 1:33.89. He led UGA teammate Luca Urlando, who touched 2nd in 1:35.98.

The swim ranks him 25th in the NCAA this season, and with the conference meets still on the horizon, it will almost certainly take a faster swim to earn an invite to the big meet.   For DI men, the approximately top 30 swimmers in each event will earn invites. That’s not to say we don’t expect the 1:40.65 SCM 200 freestyler to make it to NCAAs, just that he’ll have to swim faster at SECs than he did today to do so.

UGA’s Jake Magahey clocked a 14:49.98 to win the men’s 1650 free. The swim was Magahey’s best of the season, and all but guarantees him an invite to NCAAs in March.

ATHENS, Ga. – In the final dual meet of the 2021-22 season, the University of Georgia swimming and diving team honored 18 members of its season class before posting a sweep of Emory Saturday afternoon at Gabrielsen Natatorium.

In the men’s meet, No. 12 Georgia topped Emory, 175.5-128.5, while in the women’s meet, the 12th-ranked Bulldogs bested the Eagles, 150-126. In both meets, Georgia elected to swim under exhibition status during the second half of competition.

In a day full of Georgia victories, freshman Elsa Fretz broke through with the first two wins of her collegiate career, taking first in the 100 and 200 freestyle. Fellow freshman Matthew Sates debuted for the Bulldogs with a winning B-cut time of 1:33.89 in the men’s 200 free, immediately moving into the program’s all-time top 10 at No. 7. Senior Harrison Wayner also notched a top-10 time with his winning B-cut of 52.77, the sixth-best performance in school history. Sophomore Wesley Ng added another B-cut with a personal-best 47.06 in the 100 backstroke.

At the diving well, Georgia posted a highly-successful outing, tallying eight Zone cuts during the meet. Senior Ellie Crump finished first on 1-meter with a season-best score of 276.60 before earning a Zone cut on 3-meter at 285.15. Fellow seniors Ambria D’Alonzo and Tally Brown qualified for Zones on 1-meter and 3-meter respectively, while sophomore Meghan Wenzel added a cut on platform.

On the men’s side, freshman Rhett Hopkins qualified on 3-meter with freshmen Nolan Lewis and Timothy Fagan qualifying on platform. Senior Hudson Coldren closed out his home career with a winning mark of 260.85 on 1-meter.

Georgia now turns its attention to the upcoming SEC Championships at the Allan Jones Aquatic Center in Knoxville, Tenn. The championship meet opens on Tuesday, Feb. 15 and runs through Saturday, Feb. 19. The Bulldogs will return to Gabrielsen Natatorium for the Last Chance Meet on Saturday, Feb. 26.

PRESS RELEASE – EMORY: (Not Available Yet)

How do we feel about Sates in the 400 IM? His best time converts to 3:37.9, which would put him just on the outside of a 4 man scramble for the title at NCAAs. If he pans out in the 200 free he basically maxes out at 3rd behind Smith and Kibler. I think he might have a better chance to sneak in and win the 400IM because everyone will be racing instead of swimming fast.

There is going to be a lot of relay pressure on him this year. I would guess that the net-net with the benefits he can provide to the Georgia relays might make the 200 free a less taxing decision.

Do you think there’s a chance he swims 2 individuals and 5 relays? Georgia made that play with Urlando last year, although he wasn’t a title threat in the 200IM

I don’t know, given that they did it with Luca last year, you know it’s on their mind, but I think it really depends on how he’s swimming. If he’s on fire, no way they do that. If he’s faltering, I could see it. They really are thin on relay legs this year.

It’s not very fast. He must learn how to swim in a bathtub.
With a few more races under his belt to acclimatize and fully rested he will be much much faster
When you go 1.40 in SCM you must be able to go under 1.30 in SCY.

Its good in season…

Breaking News: according to an instagram story, Simone Manuel is training at the University of Tennessee.

this is true. check out vol_swimdive on IG. Simone is in the weight room w/ Erika Brown, Deloof sisters. Might be just a training trip for Simone, but at least it’s some kind of clue on her next moves

No pictures of Sates in Swimswam archives yet?

Braden, if you’re still looking for an editor, I did send my resume in…
Please see paragraph 1 of the UGA press release 😉

Urlando in 1 back because 44.9 sounds so much nicer than 1:42 IM and Urlando’s already been double 46 fly/back in season.

Yes, Sates and Magahey were in tech suits.
Weird that UGA and Emory swim every year but UGA and GT rarely dual?